DK Shivakumar And Siddaramaiah Put Up Show Of Unity At Latter's B'day Bash; Hug After Nudge From Rahul Gandhi 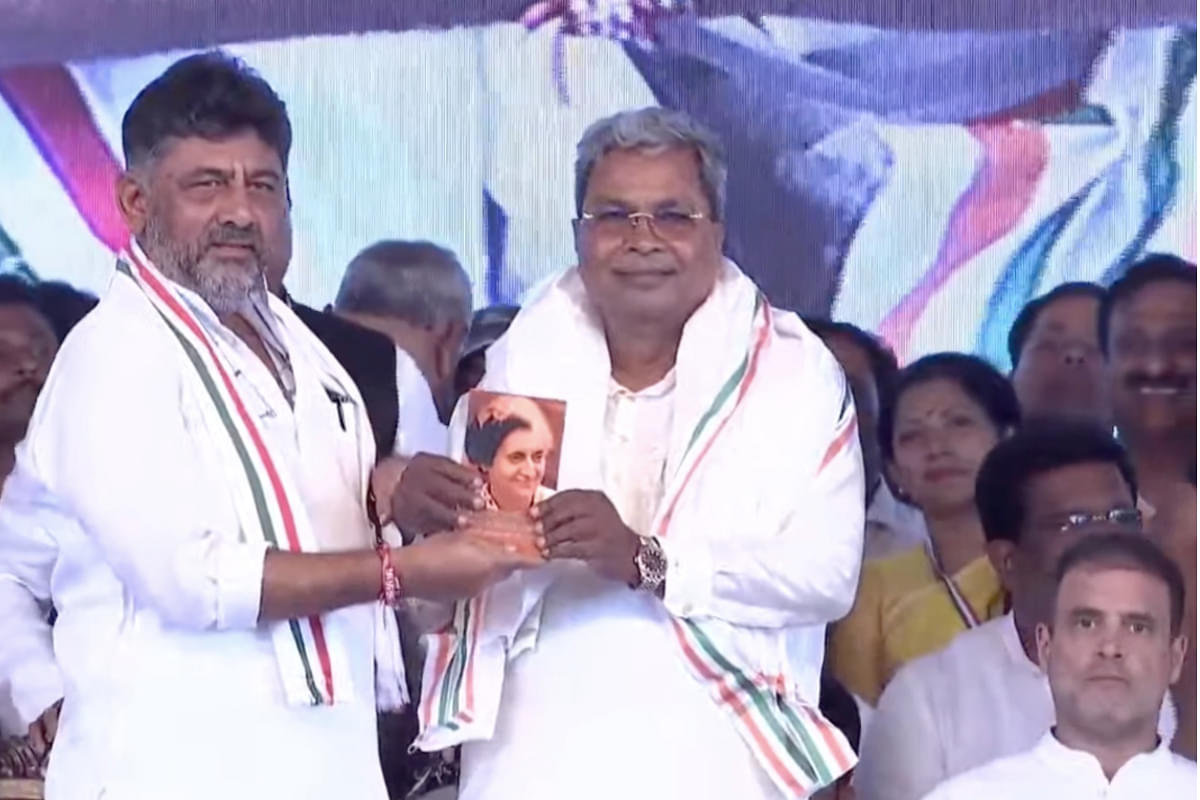 The much-discussed birthday bash of former CM of Karnataka, Siddaramaiah, was held in Davanagere today with Congress leader Rahul Gandhi in attendance.

In unsaid terms, it marked the blowing of the election bugle for the Congress.

On the dias, while D K Shivakumar felicitated Siddaramaiah and then raised his hand to the cheering crowd, Rahul Gandhi gestured to the man known as the ‘Congress’ troubleshooter’, to embrace Siddaramaiah. Nudged to do so, Shivakumar hugged Siddaramaiah once to each side, much to the roar of the audience that had gathered.

Rahul Gandhi began his speech by saying ’I don't normally go for birthday celebrations. But I have come here because I share a special relationship with Siddaramaiah’.

Drawing people’s attention to the camaraderie on display between the two party bigwigs on stage, Gandhi said: “I was happy to see D K Shivakumar and Siddaramaiah hugging each other on stage”.

“D K Shivakumar has done tremendous work for the Congress party organisation and we are united to defeat the RSS BJP govt in Karnataka,” he added.

Siddaramaiah reiterated the sentiment and said “Shivakumar and me are together. There is no difference of opinion between us. The question before us is to get rid of this corrupt, communal and people-troubling government that we have in Karnataka today and to bring back the Congress led by Rahul Gandhi back to power”.

He added that Rahul Gandhi is the ray of hope or ‘asha kirnaa’ of the country while taking jibes at PM Narendra Modi and calling him ‘vachana brashta’ among other things.

While D K Shivakumar in his speech refrained from glorifying the personality of Siddharamaiah, his words carefully praised his work as a Congress CM.

Shivakumar and Siddaramaiah are considered front-runners for the chief minister's post in the event of Congress coming to power in Karnataka in next year's election, due in April-May. Around eight lakh people were said to have attended this show of strength even amidst heavy showers today.

Earlier in the day, Rahul Gandhi was also formally 'initiated' into the Lingayat tradition. Lingayats are believed to be the most important community, politically, in Karnataka. It is estimated they form about 15-17 per cent of the state's population.