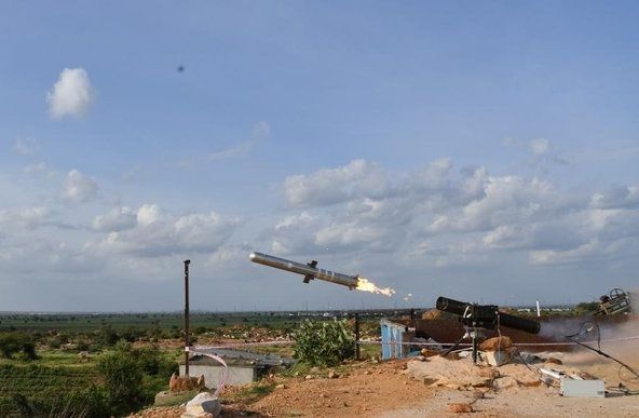 These marked the third series of the flight tests of MPATGM which were conducted in the ranges of Kurnool in Andhra Pradesh.

The low weight ensures it is capable of being fired from shoulder and can be used during day and night. It has minimum lateral centre and gravity offset.

The target mimicked a functional tank while the missile launched from a man portable tripod launcher hit it in top-attack mode and destroyed it with precision. According to a press release, all the mission objectives were met.

The missile is derived from NAG anti-tank guided missile, and is built by DRDO in partnership with Indian defence contractor VEM Technologies Private Limited.

The fire-and-forget feature in the missile ensures that the missile hits the target without the launcher being in line-of-sight. This is an important feature as the soldiers who would fire the missile in the battlefield are themselves vulnerable to attack.

Due to this feature, the missile doesn’t need further guidance after launch. The missile is equipped with advanced Imaging Infrared radar (IIR) seeker and therefore, is a ‘heat-seeker’, that is, it uses the infrared (IR) light emission from a target to track and follow it.

IIR allows the user to seek cover immediately after launch. By the time the enemy realises he is under attack, the user can go out of sight, possibly moving to a new angle of fire, or even out of the area.

The heat-seeker systems also have a disadvantage that they need cooling time. They are not able to operate until the refrigeration component has cooled the system.

The missile also has top attack capability which means it can attack armoured vehicles from the top, where the armour is thinnest. It is fitted with high-explosive anti-tank (HEAT) warhead.

HEAT shell uses an explosive charge with a conical cavity shaped in such a way that it concentrates its explosive energy into a very high-velocity jet capable of piercing thick armour.

The test paves the way for the Indian Army to have developed third generation MPATGM indigenously. The missile is effective against both stationary and moving targets, and will be deployed in infantry and parachute battalions of Indian Army.