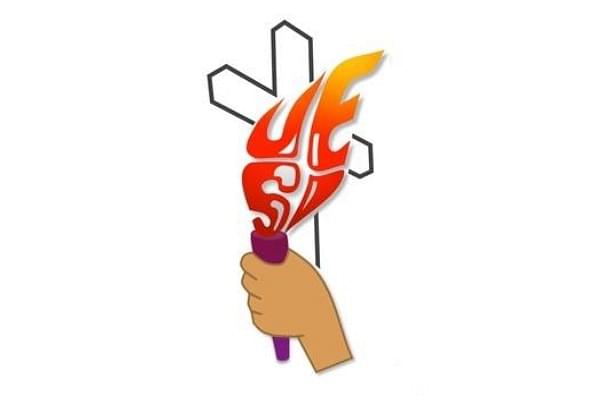 Logo of the Union of Evangelical Students of India (UESI)

A group of Hindus from Sri Lanka have asked India to ban the entry of one of their nationals Savithri Sumanthiran, Regional Secretary, International Fellowship of Evangelical Students (IFES), since she has been indulging in proselytising students.

The group, called Eelam Shiva Sena - is reported to have sent a letter to Prime Minister Narendra Modi complaining that at least 30,000 volunteers are working in India under Savithri’s direction, targeting post-matric students and converting them.

IFES, headquartered in the United Kingdom, has an Indian affiliate, the Union of Evangelical Students of India (UESI), functioning from Kilpauk in Chennai.

The group pointed out that between January and March this year, the UESI had received donations from 19 persons from the US, UK, Canada and Australia totalling over Rs 38 lakh.

Alleging that Savithri, wife of Sri Lanka Parliament member M A Sumanthiran, has been assigned to work in 10 countries in the Indian Ocean region, the group said that five countries including Pakistan, Bangladesh, Iran and Afghanistan have banned her entry into their territory.

Stating that she continued to carry out her conversion activities through her evangelist organisation, the group said that as Hindus, they were opposed to her entry into India for such activities.

It said that both Savithri and her husband are engaged in evangelist work in Sri Lanka. Sumanthiran was earlier the deputy bishop of the Methodist Church, which has employed 54 full-time evangelists with fixed targets to convert Hindus to Christianity.

In 2017, an attempt was alleged to have been made to assassinate Sumanithran. Four former Lankan Tigers for Tamil Eelam (LEET) members were arrested in this connection.

However, Lanka’s Northern Province Chief Minister C V Wigneswaran expressed doubts over the assassination attempt and said it was a bid by the Sri Lanka government to not reduce the presence of Sri Lankan Army in the region.

This forced the Sri Lanka Ministry of Buddhist Affairs to bring in “Freedom of Religion Act’ in 2005 to curb conversion to Christianity. It eventually restricted the reach of non-Buddhist faiths in Sri Lanka.

According to the Regional Centre for Strategic Studies paper on “New Evangelical Movements and Conflicts in Sri Lanka” with a perspective on Nepal and Sri Lanka, Christian organisations based in Europe have descended into South Asia in large numbers in the last five decades.

It says that many new Evangelical groups have surfaced in Sri Lanka since the 1980s, altering the religious dynamics and pluralism in the Island nation.

IFES website says it is a “movement of students sharing out the good news of Jesus Christ”. It says its work is to establish and support student-led indigenous Christian movements,

The UESI says in its website that its mission is to “evangelise post-matric students in India, nurture them as disciples of Jesus Christ that they may serve the church and the society”.

The Eelam Shiva Sena is involved in preventing the conversion of Shaivaites to Christianity and is trying to implement the “Freedom of Religion Act” in the Northern Province.

Leaders of parties espousing the cause of Lankan Tamils have so far opposed the implementation of the Act.

In March this year, Sumanthiran told the Lankan Parliament that his wife Savithri is employed with the IFES, drawing a monthly salary of $1,100 (approximately Sri Lankan rupees two lakh a month).