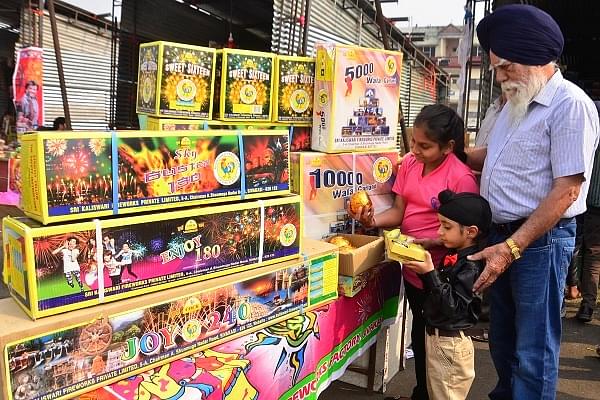 Children buy firecrackers ahead of Diwali festival at a market in New Amritsar. (Sameer Sehgal/Hindustan Times via GettyImages)

In the past few years Diwali crackers have turned from being an entertainment tool to a political one for certain individuals and organisations.

The narrative against firecrackers has been fuelled by allegations of heavy pollution during Diwali — especially in Delhi and its nearby areas.

This has included various activists and movie stars demanding a ban on bursting crackers during the festival.

The Indian judiciary too has been sympathetic to their position and the Supreme Court had completely banned crackers during Diwali in 2017 and had partially lifted the ban the following year.

Despite various reports placing the blame on stubble burning and construction activities for Delhi’s Diwali pollution woes, the protest against conventional crackers has continued by a section of people.

While delivering its judgement on Delhi’s firecracker usage in 2018, the Supreme Court had ruled that only green crackers can be manufactured or sold in the market.

Fast-forward one year and at the start of this month, the Health and Family Welfare Minister, Dr Harsh Vardhan, announced that the Council of Scientific and Industrial Research (CSIR) in collaboration with the National Environmental Engineering Research Institute (NEERI) has successfully developed various environmental-friendly firecrackers — aka ‘green crackers’.

So What Are Green Crackers

Let’s go back to the basics. Simply speaking, green crackers are advertised as crackers that “do not contain harmful chemicals that cause air pollution”. Green crackers are “less harmful” to the environment and employ eco-friendly components to reduce harmful emissions.

They differ chemically from traditional ones due to lower aluminium, barium, potassium nitrate and carbon content. These chemicals have either been completely removed or sharply reduced from the manufacturing process, leading to an emission reduction of 15 to 30 per cent.

The emitted sound has also been reduced from 160 decibels to 125 decibels, though work still needs to be done to reduce it to below the 90-decibel limit.

The CSIR-NEERI has been at the forefront of green cracker research and it was announced just before last Diwali that it had developed three types of green firecrackers namely — Safe Water Releaser (SWAS), Safe Thermite Cracker (STAR) and Safe Minimal Aluminium (SAFAL).

These varieties of crackers were developed after a year of research that included testing for colour, smoke, brightness and particulate matter. The scientists concluded that these green crackers emit both lower smoke and noise.

In the case of flower pot crackers (Aanar) it was noted that the green variant — sans barium nitrate — had led to a particulate-matter reduction of almost 40 per cent.

In the case of Bijli crackers, the researchers are trying to eliminate the use of ash as a desiccant. In the case of sound-emitting crackers, variants that do not burn sulphur dioxide have been tested.

Even though CISR-NEERI had developed the green crackers, the battle was only half won. It’s one thing to develop green crackers and it’s another matter altogether when it comes to training manufactures to incorporate this technology into their production processes.

One of the most well-known firecracker industry in India is housed in Tamil Nadu’s Sivakasi. As the small scale industries in the town specialised in conventional crackers, the green cracker verdict reportedly resulted in many units shutting down or operating on only a fraction of their manpower.

The key problem for them was their inability to adhere to the stringent manufacturing guidelines of the Supreme Court.

The administration soon swung into action to potentially save as many as 8 lakh jobs. Labourers involved in the cracker industry were sent in batches for training at CISR-NEERI via a central-state initiative. This training initiative involved as many as 230 cracker manufacturers out of which 75 per cent expressed satisfaction over the training.

The result? Sivakasi fireworks manufacturers are now confident of meeting the green cracker demand. The manufacturing that had been halted for four months began roaring back to life from March this year.

From next year onwards green crackers would also be available with a special logo and QR code to prove their authenticity.

Diwali this year is expected to be a lively affair for India’s cracker manufacturers.