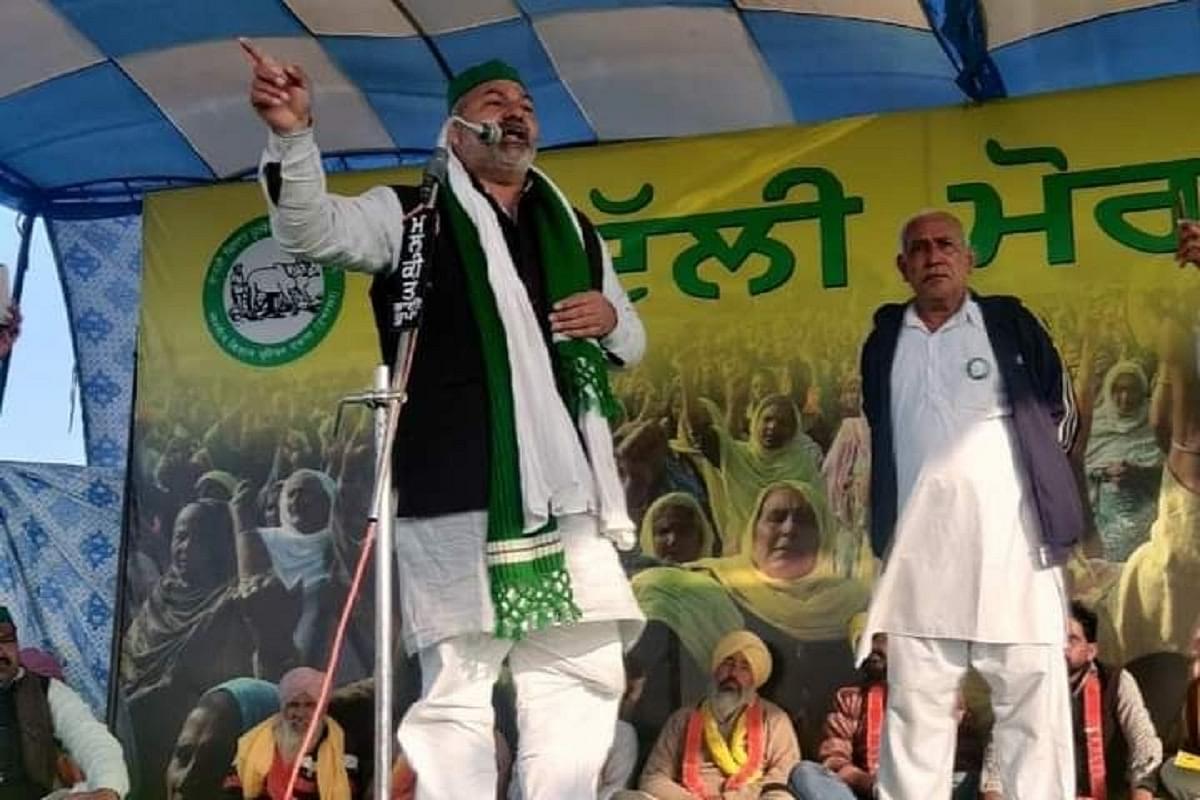 Rakesh Tikait of Bhartiya Kisan Union (BKU), as the leader of the ongoing farm law protests, has emerged as one of the strongest critics of the ruling Bharatiya Janata Party (BJP) dispensation, and unyielding towards the government's offer to settle the matter with negotiation. However, with the role he played after the Lakhimpur Kheri incident, Tikait is signalling that he is a more pragmatic leader who can be flexible enough to be relevant in the longer-term political game.

For the last 10 months, under Tikait's leadership, farmer protesters have been blocking one half of the Ghazipur Border to Delhi. Tikait met opposition leaders, toured election-bound states like West Bengal, organised a mahapanchayat in Muzaffarnagar in poll-bound Uttar Pradesh to rally votes against the BJP.

After nine persons lost their lives in a clash between the convoy of a BJP MP and farmers protesting in Lakhimpur-Kheri, Tikait organised a mahapanchayat and decided to visit the district. He also said that protests will be carried out across the country against the "murder" of the four farmers. However, Tikait has now emerged as an unlikely ‘trouble-shooter’ for the BJP government in Lakhimpur in Uttar Pradesh.

On Sunday, when the incident took place, while all politicians were blocked, Tikait was allowed entry into Lakhimpur late at night by the administration. A series of rounds of talks between Tikait, the families and the government followed. The very next day, after nearly 12 hours of talking, a compromise truce was struck between the Uttar Pradesh government and Tikait with the latter joining a press conference with UP’s top cop Prashant Kumar.

The government subsequently announced that a retired High Court judge would probe the Lakhimpur Kheri violence and give Rs 45 lakh compensation, government job, an FIR (first information report) against the accused to the families of the four farmers killed in the incident. Tikait accepted the government's offer on their behalf.

Reportedly, Tikait had himself asked the officer coordinating with him from Lucknow to keep away opposition leaders from the district as that would make convincing the farmers harder.

Yesterday, Tikait-mediated truce was threatened by the families of the four dead farmers refusing to cremate the dead bodies. The families insisted that the minister’s son be arrested first and all bodies must undergo an autopsy again as no bullet wounds were reflected in the first autopsies.

Tikait then himself visited each family to convince them. The bodies of the three farmers were cremated same evening, and this (6 October) morning, the body of Gurvinder Singh, whose family members alleged he was shot, was also cremated after the second post mortem with Tikait’s intervention. In fact, by Tuesday evening, two of the farmer families had also accepted cheques for Rs 45 lakh each from the government.

Tikait also reportedly visited the family of the slain journalist, Raman Kashyap, and said Kashyap “was very much a farmer too”.

This is significant as the family members of the dead farmers, witnessing an outpouring of support from various opposition leaders, had no reason to "cow down". On Monday night, Rashtriya Lok Dal (RLD) leader Jayant Chaudhary had visited these families while Priyanka Gandhi Vadra and Akhilesh Yadav had spoken to them on the phone. By Tuesday afternoon, a Trinamool Congress (TMC) delegation had also reached the families. However, the family members chose to trust Tikait instead of the opposition political leaders.

After the truce on Monday, Tikait had said, “The UP government sent such a high-level team so a compromise was achieved.”

After the incident, the Adityanath government swiftly dispatched a carefully crafted team of senior officers, some of them having worked with Tikait in western Uttar Pradesh, others with past contacts in Lakhimpur Kheri. The team carried out the negotiations based on a thought-through strategy.

As per an Indian Express report, the negotiations were held over “three stages”, at a building close to the spot, to ensure a breakthrough. First, Lakhimpur Kheri District Magistrate Arvind Chaurasiya and Superintendent of Police Vijay Dhull held talks with the farmer delegation, which was led by Tikait and comprised two of his confidants and four local Sikh farmers. They met thrice, with intervals in the middle.

Then, as per the strategy, Lucknow Range Inspector General Lakmi Singh and Divisional Commissioner Ranjan Kumar took over, holding meetings spread over several rounds, with breaks for tea and lunch.

The report quotes officers as saying that there were many tense moments as the crowd kept swelling around the site, and they feared that any small incident could trigger a clash between angry farmers — many allegedly armed with swords, sticks and licensed guns — and the huge contingent of police, Rapid Action Force (RAF) and Sashastra Seema Bal (SSB) deployed at the spot.

After a final go-ahead from Lucknow to strike a deal, around 1 pm, a team of Additional Chief Secretary, Agriculture, Devesh Chaturvedi, ADG, Law & Order, Prashant Kumar, and ADG, Lucknow Zone, S N Sabat went in to talk to the farmers, armed with a copy of the FIR against Ashish. The family members of the deceased farmers were also present at this meeting where the deal was finalised. Top officers in Lucknow also spoke to Tikait and a Sikh farmer leader from Punjab.

Additional Chief Secretary (Home) Awanish Kumar Awasthi also played a crucial role. He was in constant touch with officers at the spot and Tikait. As per the sources, Awasthi has kept a line open with Tikait since the farmers’ agitation over the three farm laws began a year ago, and has had good relations with the family since coming in contact with Tikait Senior during his stint as the District Magistrate of Meerut. Officers say this is why the BKU has not held any big agitation within UP limits, especially around Lucknow.

The other officers too knew Tikait well. ADG Prashant Kumar served as ADG, Meerut Zone, for a long time, while ADG S N Sabat was earlier posted as SSP, Muzaffarnagar. ACS, Agriculture, Chaturvedi has been part of many meetings with Tikait in his official capacity.

With Tikait's help and a group of senior officers and others familiar with Lakhimpur Kheri, the UP government was successful in stopping the incident from spiralling into not just a law and order nightmare, but also a serious political challenge. Within 24 hours of the incident, the protesting farmers in Lakhimpur Kheri had climbed down from their position and a crowd of over 25,000 gathered at the site dispersed.

In the words of an opposition leader quoted by News18:

“The role played by Tikait is very strange. He was the only one allowed entry into Lakhimpur by the UP government. It was very surprising that the families agreed to a Rs 45 lakh compensation and gave permission for a post-mortem without pressing upon for the arrest of the Union minister’s son who has in fact not been arrested even till now. Our conversations with the families show they just listened to Tikait.”

An officer present at the spot said that at no time did Tikait express any aggression or criticism towards the state government — either at the talks or while addressing the farmers, and left Lakhimpur Kheri only after the protesters had dispersed.

Interestingly, the team of senior officers reportedly did not want a press briefing on the final deal, but Tikait insisted on it. He told the media that farmers were ending their agitation over Sunday’s incident, and went on to address the farmers.

It is clear that Tikait proactively worked to make sure the deal goes through. The success of the truce has bolstered Yogi Adityanath's image as a Chief Minister who is efficient and effective, however, equally so, it has demonstrated Tikait's long-term plans.

Tikait, who once lost an election so badly that his deposit was confiscated, found new relevance after the farm protests broke out last year. Notably, he had initially supported the three farm reform laws. In the beginning, he faced stiff competition from rival farmer leaders. For quite some time, his followers were numerically less than those mobilised by V M Singh's Rashtriya Kisan Mazdoor Sangathan.

Analysts postulated that Tikait was just a benign face picked by Punjab farmers, who take away the largest share of minimum support price (MSP) in India, as a non-Sikh ally to give their anti-farm laws agitation a secular outlook. Tikait was just a 'failed son' of a great leader.

The situation started changing with V M Singh pulling out of the agitation, and Tikait's tears broadcast by the media to every farmer household. The tears did the magic for Tikait. His humiliation was seen as their own by the whole community — “He may be a failed son, but a son nevertheless,” says Bisht. He became an undisputed leader of the farmer protests.

The Lakhimpur truce shows Tikait has honed his political game.

Currently, in the poll-bound state of UP, farmer protests are largely concentrated in the western districts. Tikait plans to expand footprint in eastern UP, consolidate his grasp on farmers state-wide, and increase his political stature, eventually becoming as politically strong as his father, the formidable Mahender Singh Tikait.

In all of this — Tikait having demonstrated his political game and UP government the ability to deal with the toughest of the situations — the opposition in India was demonstrated to be sidelined to fringes once again.

Also read: A Failed Politician With A New 'Dream': How Rakesh Tikait Was Propped Up As Farmer Protest Leader And What It Means