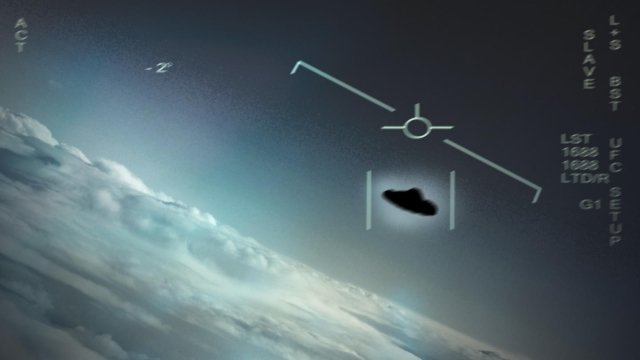 A screenshot from the video captured by a US navy pilot (Source: huffingtonpost)

The news of United States (US) navy confirming the series of UFO videos released over the past two years as that of ‘unidentified aerial phenomena’ took Twitter by storm.

One of the videos shows a fast-moving UFO off the East Coast as it was tracked by two US Navy pilots in 2015. A private research and media firm The Stars Academy of Arts and Science (TTSA) had released the clip. It noted that the captured object had no wings or tail, and left no exhaust plume.

The agency further noted: “This footage was captured by a U.S. Navy F/A-18 Super Hornet using the Raytheon ATFLIR Pod that was being operated by a highly trained aerial observer and weapons system operator whom the government has spent millions of dollars to train.”

At the time, the US Defence Department had refused to comment on the video.

In another video, a candy-shaped object referred to as ‘tic-toc’ was seen descending almost 60,000 feet in a matter of seconds off the California coast in 2004. One pilot detailed a disturbance up to the size of a football field:

“The disturbance appeared to be 50 to 100 meters in diameter and close to round. It was the only area and type of whitewater activity that could be seen and reminded him of images of something rapidly submerging from the surface like a submarine or a ship sinking.”

However, a submarine in the vicinity did not detect anything unusual underwater. This raised questions about the advanced cloaking capabilities along with the high speed.

In another reported sighting in 2014, a US Navy pilot almost crashed into an object resembling a “sphere encasing a cube”. The object “had no visible engine or infrared exhaust plumes, but they could reach 30,000 feet and hypersonic speeds,” several pilots were quoted as saying by the Times.

They also added that there were several such sightings and the UFOs were seen performing maneuvers “beyond the physical limits of a human crew” like turning instantaneously.

The videos, at the time of the release caused much sensation. It was revealed that the United States had spent $22 million on the Advanced Aerospace Threat Identification Program that ran for five years, before being cancelled in 2012 over funding issues. The program studied different unidentified aerial phenomena.

So These Are Alien Spacecrafts Right?....Well

While the US government reportedly declined to comment on the videos when they were released, the US Navy has now accepted that the "objects contained in these videos are unidentified aerial phenomena”.

An unidentified aerial phenomena can be the result of misperception of other objects like astronomical objects (bright stars, planets, meteors, re-entering man-made spacecraft, artificial satellites, and the Moon), aircraft or missile launches, balloons and kites, birds, unusual clouds.

It can also be a light phenomena mirage like Fata Morgana, ball lightning, moon dogs, searchlights etc. Extra-terrestrial vehicle (a term used to distinguish between an UFO and ‘alien spacecraft’) is just one of the possibilities. A UFO sighting also raises speculations of a country having superior-capability aircraft technology unknown to the world.

Luis Elizondo, the former military intelligence official who led the US government’s UFO program said that there was more information yet to be released to the public. In 2017, Elizondo, now a part of the TTSA, told CNN, “My personal belief is that there is very compelling evidence that we may not be alone.”

When the UFO program came to public attention in 2017, Times quoted James Obern, an American space journalist and historian, and Sara Seager, a scientist specialising in the atmospheres of extra-solar planets, denying possibilities of alien visitation.

"There are plenty of prosaic events and human perceptual traits that can account for these stories," said Oberg, but welcomed further research in the area.