Explained: The Noise And Fury In Tamil Nadu About Poet-Saint Thiruvalluvar 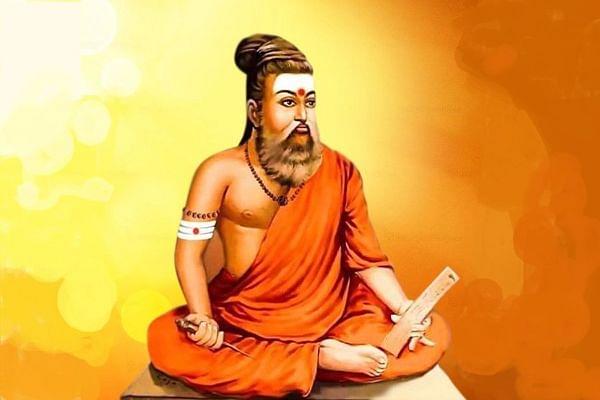 During his address to the United Nations General Assembly, Modi had quoted ancient Tamil poet, Kaniyan Poonkundranar’s verses from Purananuru that was written 3,000 years ago. (Purananuru is a compilation of 400 poems that talks of how a king should treat his citizens.)

Dwelling on universal brotherhood, the Prime Minister said: “Yaadum Oorae, Yaavarum Kelir (To us all towns are our own, everyone our kin)” to underline the fact that the universe belongs to all of us.

He also made it a point to mention that Tamil is the oldest living language in the world.

Modi reiterated Tamil language’s status at the oldest again at an IIT-Madras event on 30 September this year. This was followed by the Sino-Indian summit with Chinese President Xi Jinping at the historic venue of Mamallapuram in Tamil Nadu.

Modi has continued this theme with his current visit to Thailand too, where he released the Thai translation of Thirukkural written by Tamil saint-poet, Thiruvalluvar. Thirukkural is a classic literary work containing 1,330 couplets that dwell on the virtues of human life.

At the book-release event, the Prime Minister said that the Thirukkural was not just a book but a guiding light that was written 2,500 years ago.

The Tamil Nadu unit of the Bharatiya Janata Party (BJP) made use of this opportunity to put out a tweet with Thiruvalluvar wearing a saffron dhoti and sporting ash marks on his body.

That set the cat among the Dravidian pigeons, with the DMK President, M K Stalin tweeting that the BJP was betraying Tamils by trying to clothe Thiruvalluvar with saffron.

He also said whatever colour the BJP paints Thiruvalluvar with, its true colours would be revealed soon.

That set off a virtual war of words on Twitter with views for and against the BJP and the DMK. On its part, the Tamil Nadu BJP trolled Stalin asking him to recite the 127th Kural without any mistake including its meaning.

The 127th verse is: “Yaakaavaa Raayinum Naakaakka Kaavaakkaal Soakaappar Sollizhukkup Pattu.” This means: “Whatever besides you leave unguarded, guard your tongue; otherwise, errors of speech and consequent misery will ensue.”

The tweet met with no response from Stalin nor from any top DMK leader. The Tamil Nadu BJP obviously attacked Stalin’s inability to speak coherently in either Tamil or English, even when he reads out from a slip of paper.

The battle of wits on Twitter went on till late in the night, with some on social media questioning how, after 1960, Thiruvalluvar’s picture was drawn without him sporting the ash marks on his body.

They also pointed out at the recovery of Thiruvalluvar’s images sporting the ash marks in Sri Lanka. A photograph in the social media, taken on 24 February this year, at Vavuniya in Sri Lanka, shows Thiruvalluvar draped with a yellow towel over his shoulders.

Another post on social media said that Thiruvalluvar’s photos, statues, and images without the ash marks are a post-1960 phenomenon. They were drawn by Venugopala Sharma.

Even as the war continues on social media on whether Thiruvalluvar wore saffron or white clothes, if he sported ash marks on his body or not, a statue of the saint-poet was sprayed with black paint at Thanjavur on Monday.

Be that as it may, the fact is that no prime minister or politician from Tamil Nadu has ever done for the language and the state, abroad, what PM Modi has done in the last three-four months.