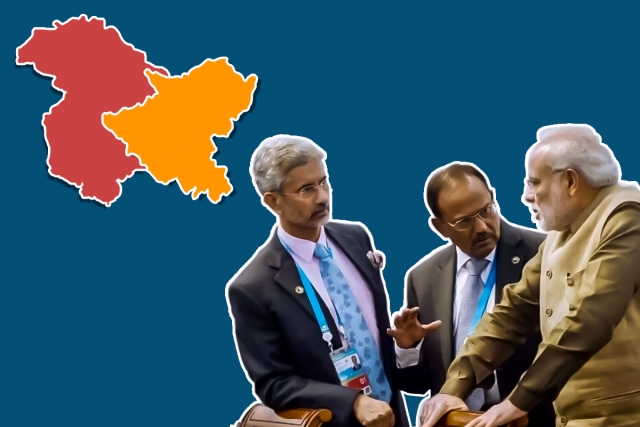 After failing to garner international support for its propaganda over Kashmir, Pakistan tried its best to turn the scale in its favour at United Nations Human Rights Council (UNHRC) on Tuesday. Pakistan had written to the UN last month, flagging what it called "massive violations of International Human Rights Law".

Pakistan alleged that India was perpetrating large-scale human rights violations in Jammu and Kashmir. Pakistani foreign minister Shah Mehmood Qureshi called for attention towards possible "genocide" in Jammu and Kashmir in future, and hinted at the consequences of such situations in a "nuclearised" South Asia.

Following is a summary of Indian response to Pakistan’s "hysterical statements with false narratives" which were meant to "politicise this forum":

Indian diplomat Vijay Thakur Singh justified the decision to scrap special status of Jammu and Kashmir saying that it was essential to ensure the residents of the region same constitutional benefits at par with rest of the Indian citizens.

India also stated that the decision was internal matter of India and Pakistan had no locus standi on the issue.

Singh pointed out that the step will lead to the end of institutionalised gender discrimination in various areas, including property rights and local bodies representation, and longstanding discrimination against refugees and under-privileged sections.

She also added that the step will further facilitate better protection of juvenile rights, the rights to education, information and work and better laws against domestic violence will now be applicable in Jammu and Kashmir.

Singh said that "temporary preventive and precautionary measures" were necessary after the decision to ensure the safety of its residents in the face of credible threats of cross-border terrorism.

She further added that “basic services, essential supplies, normal functioning of institutions, mobility and near-total connectivity” were being ensured by J&K civil administration despite challenging circumstances. She further added that democratic processes have been initiated in the Valley.

India said that the Islamic Republic’s “hysterical response” was due to the fact that the decision “cuts away ground from under its feet by creating obstacles in its continuing sponsorship of cross-border terrorism".

India also hinted at Pakistan’s weaponisation of religion and call for Islamic 'Jihad’ against India.

"Some Pakistani leaders have gone as far as calling for jihad to encourage violence in Jammu and Kashmir and third countries, in order to create a picture of genocide which even they know is far from reality," said Vimarsh Aryan, a senior official of the foreign ministry.

He further said that Pakistan’s rhetoric “will not distract international attention from Pakistan’s persecution and elimination of religious and ethnic minorities – be it the Christians, Sikhs, Shias, Ahmadiyas and Hindus”. This is the reason why Pakistan no longer publishes statistics on its minorities as India does, he added.

He also gave examples of Asiya Bibi, a Christian who was forced to flee Pakistan, Abdul Shakoor, the 82-year-old Ahmadiya, highlighting discrimination against religious minorities in Pakistan.

He further said that abduction and forced conversion of minor Sikh girl Jagjit Kaur in Pakistan exemplified the state of women in Pakistan, especially from minority communities.

India also repeated its allegations of Pakistan using cross-border terrorism as ‘a form of diplomacy’. Singh said that those who "abet, finance and support terrorism in any form on territory under their control are in truth the worst violators of human rights" .

India further added that the world is aware that Pakistan’s narrative comes from “epicentre of global terrorism, where ring leaders were sheltered for years”.

In a reference to the human rights violations in parts of Pakistan-Occupied Kashmir, Singh said, “Those who are attempting this speak on the human rights of minorities in other countries whilst trampling upon them at will in their own country. They cry victim when they actually are the perpetrators."

India needs to up the ante

India faces the unique situation of being sandwiched between two nuclear powers- Pakistan and China- one is world’s largest autocracy, while other is a military-backed failing democracy. Both routinely defy international rules and norms.

At the previous Security Council meeting on Kashmir issue, China projected itself as a neutral mediator between India and Pakistan, obscuring the fact that China has itself captured one-fifth of the erstwhile princely state of Jammu and Kashmir, effectively killing the 1948 UNSC resolution.

Pakistan currently holds 35 per cent of J&K territory. In 1963, Pakistan ceded a portion of it to China, which had earlier occupied Aksai Chin Plateau from Ladakh. The territories under the control of both are essentially a result of wars of aggression waged by them against India.

Currently, and rightly so, only India lays claim to the full territory of J&K.

The hypocrisy of Pakistan and China in protesting the abrogation of special status of Indian state of Jammu and Kashmir is astounding, and so is the silence of international media over it.

Neither Pakistan, nor China granted any autonomy to its portion of the region. Out of the three countries that hold the territory of princely state of Jammu and Kashmir, only India provides media free access the territory. Pakistan requires foreign journalists to obtain a military-approved “no-objection certificate” while China has never allowed international media into its portion of J&K.

Another myth prevailing in the international community is the offence of a ‘Hindu nationalist’ government against ‘Muslim majority Kashmir’.

The assault of Radical Islamism in the Valley that attempts to wipe-out the syncretic heritage of Kashmir in favour of Wahhabi/Salafi ideology (an example is forced exile of Kashmiri Pandits), cross-border terrorism by Pakistan and rabid Hindu-hatred in the rhetoric of the Islamic Republic are interconnected issues. India needs to bring out these facts in the public realm more vigorously.

While India made a diplomatic leap when PM Modi directly raised the issue of Balochistan in the aftermath of a terror attack few years ago, and yesterday when it invoked the situation of religious minorities in Pakistan, it has refrained from including the rampant religious persecution of non-Muslims in Pakistan as an issue in itself, but only as a small point in discussion over cross-border terrorism.

Even yesterday, India mentioned the abduction and forced conversion of Jagjit Kaur under the broader issue of “state of women, especially from minority groups” in Pakistan.

On the other hand, Pakistan routinely makes comments about Muslims in India, and popularises the issue through diplomatic channels influencing scholars, activists, think tanks and journalists, globally as well as in India.

India’s under-confidence in this regard stems from a defective model of secularism at home, which is based on concealed distrust and soft bigotry against Indian Muslims.

Pakistan’s propaganda on Kashmir which India called “an effort to advance its territorial ambitions” is rooted in the self-image of Pakistan as the “pioneer of Islam” which is destined to carry out ‘Ghazwa-e-Hind’ to purge South Asia of the infidels. This underlying motivation is expressed through institutionalised remembrance and celebration of Muslim invaders of Indian subcontinent.

If India wants the world to take its charge of Pakistan as the mother of terrorism seriously, it has to stop not seeing the forest for the trees, and directly address the long history of Hindu hatred in the subcontinent that fuels Pakistan’s attitude towards India.

As China-Pak axis deepens, India will have to broaden as well sharpen its diplomatic offensive against both.