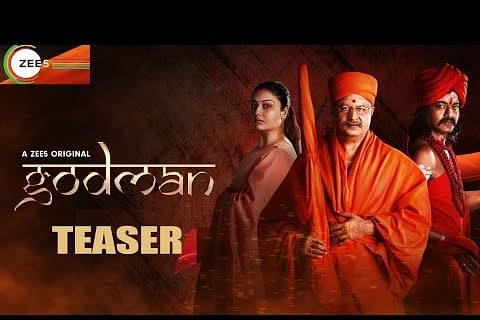 Zee5, a video-on-service-demand run by Zee Media Corporation, has dropped premiering its Tamil web series Godman, following the hue and cry raised over social media for its ‘anti-Hindu’ contents soon after its trailer was released.

In an audio clip that did rounds on WhatsApp, a person, said to be Godman director Babu Yogeswaran, was questioned by another, said to be a lawyer, over the shows anti-Brahminical and anti-Hindu dialogues, besides on a scene bordering on vulgarity.

“Will you make a similar series on your caste or community? Why should you target only one community?” the lawyer asked the director, who had no response.

He also failed to respond to the question why filmmakers were repeatedly targeting one particular community. The lawyer’s objection was to a particular dialogue that said “all Brahmins surrounding me are rogues”.

Protests against the series did not stop with this. Some on social media began to look for more information on the production team and came out with the revelation that the producer, Elango Raghupathy, was a media production coordinator at 'Jesus Calls', an evangelical organisation.

Some even said that Hinduism had become a soft target of the entertainment industry and allowing such Hindu-phobic series was questionable.

This has also resulted in demand for censorship of web series, besides wondering if any one in the industry would have the courage to make similar series on other religions or communities.

The protests forced Zee5 Tamil to release a statement saying that it has decided to “suspend the release” for now, following the feedback it received on Godman.

Zee5 clarified that it had “no intention whatsoever of offending or hurting any community, religious or personal beliefs or sentiments”.

The controversy led to intervention by the Bharatiya Janata Party member of Parliament, Subramanian Swamy, who took up the issue with Subhash Chandra, chairman of the Zee Group. Chandra reportedly told Swamy that the web series will not be telecast.

Apart from this, the Hindu Munnani and many others filed a complaint with the Chennai and cyber crime police against the producers of the web series. A first information report (FIR) has been registered against the producer and director of the series.

The charges made against the duo include “promoting enmity between different groups, wanton vilification or attacks upon the religion, race, place of birth, residence, language etc of any particular group or class”.

Summons have been issued to both by Chennai City Police but they have failed to appear for interrogation. On Thursday, the police warned that if the producer does not appear before it on Saturday, it would resort to legal recourse.

Popular video blogger Maridhas said that details of the producer of Godman web series revealed that Hindus were being “insulted by those who have Hindu names”.

One person dug out a timeline on Raghupathy’s Facebook post that hosts potshots at the popular Hindu festival Varalakshmi Vratham. The person wondered why he has not called out such practices in other religions.

The objective of these people’s comments is that the web series has been made with malafide intentions by the producer and director.

The producer is in for more trouble as Swamy says a case of fraud can be filed against Raghupathy since Feathers Entertainment, which has produced the series, does not exist on the Ministry of Corporate Affairs (MCA) records.

He said Raghupathy and his wife Leeny had a company Colorz Pvt Ltd in 2007 but MCA struck it off its register the next year.

The Godman team has, however, not taken this development lightly. It has said the dropping of the web series has been engineered by “unconstitutional and unconscionable” forces. Calling for a united stand against the attack on freedom of expression, the team said that “stifling of our voices” should be resisted and “our ideas” should be heard.

Actor V Jayaprakash, who plays the godman’s role in 10-episode series, told The Hindu that the dialogues had been snipped intentionally to generate a buzz around the series. This resulted in the lines being perceived out of context by the viewing public.

The Godman team has now launched a signature campaign demanding the release of the web series.

There are also fears that the production team could now give the web series to some other platform.