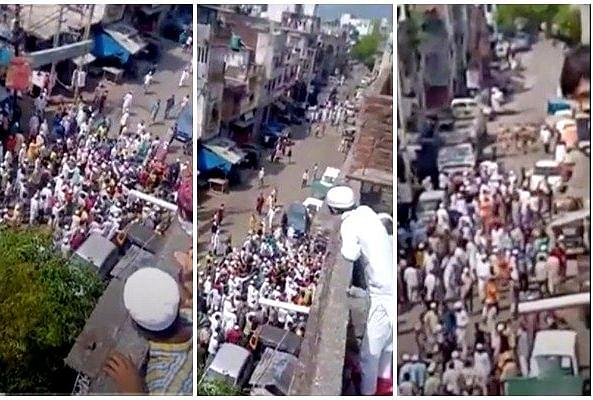 Screenshots from a video that went viral on social media.

Haldwani's Banbhoolpura area, which emerged as a hotspot of Covid-19 cases in Uttarakhand, spiking the state's count last week, has come to the limelight again.

They interrupted and objected to the health protocol right when members of the team were to proceed for health check-up and quarantining of certain people in the locality.

According to this report, the uproar was triggered after a rumour that a local maulana would be taken for quarantining emerged. When people saw the Maulana and the police together, around 700 of them rushed to the roads, breaking protocol.

The Maulana took to communication from the mosque to calm things down.

According to this report, people of the Banbhoolpura area rushed to the roads to protest the idea of health checks, taking samples, and quarantining certain people who live here. Slogans were raised by the people of the area.

Police, which was already on alert in the area, swung into action. The situation remained tense for two hours, as people asked the team of health workers to leave. Police, along with PAC and the local administration, took control of the situation.

Last week, Swarajya had written about the same area emerging as a hotspot. Uttarakhand Police had warned that attendees of the gathering at Tablighi Jamaat in Delhi, which emerged as a Covid-19 hotspot, will be booked for ‘murder’ and ‘attempt to murder’ in case they failed to report to the authorities by 6 April.

It all began when two Jamaatis were found Covid-19-positive in Jwalapur, Haridwar. Out of the four people found positive for coronavirus on Wednesday (8 April), are the two Jamaatis from Jwalapur and one from Haldwani.

The flouting of the lockdown and sealing protocol by a man from the area came to light. It has triggered anger in the people of Nainital.

According to this report, a man from Haldwani's Banbhoolpura area, which has been sealed owing to the spike in cases, reached Nainital despite the lockdown. On arriving in Nainital, he was found to be showing symptoms of the disease.

He has been sent to the Sushil Tiwari hospital.

The report says that people have been angry over this flouting of the lockdown and the sealing of Haldwani's Banbhoolpura area by the man who said that he came in contact with the Jamaatis.

The man told the police that he walked to Nainital from Haldwani. His father, however, presented a different account. He said that the man used a motorbike to cover the distance up to Bhawali and then walked the remaining distance to reach Nainital.

When he reached his home in Nainital, his mother did not open the door for him. She spoke to him from the window, asking him to leave for hospital. He has been sent to Haldwani for treatment.

Last week, an additional company of PAC had been deployed in the area and all 41 routes and roads had been closed.

According to this report, Haldwani's Banbhoolpura area had also come to light for protests against the Citizenship Amendment Act (CAA).