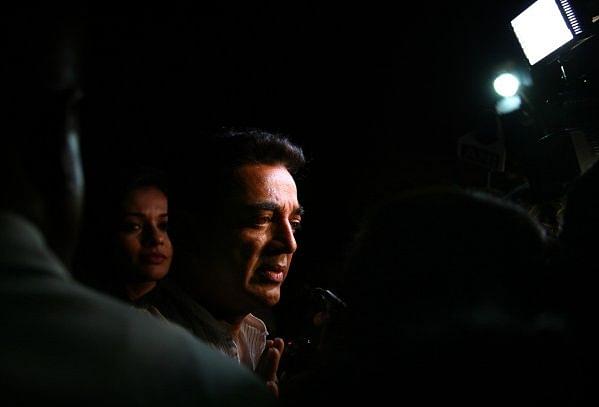 A remark on Santi Thyagaraja, renowned composer of the Indian form of classical Carnatic music, by popular Tamil film actor and founder of the fledgeling political party Makkal Needhi Maiam (MNM) Kamal Haasan has raked up a controversy in Tamil Nadu.

During a live Instagram interaction with another Tamil film actor Vijay Sethupathi, Kamal Haasan made a comment while dwelling on reasons for launching his own film production and distribution company firm Raaj Kamal Films International.

When asked by Sethupathi on chalking his own style in the Indian film industry, the veteran actor, who dabbles more in politics these days, said that he wouldn’t have launched Raaj Kamal company had he not acted in the out-out commercial Tamil film “Sakalakala Vallavan” (roughly translated as Master of all arts) in 1982.

“People criticised me for acting in that movie after having acted in Moondram Pirai (remade as Sadma in Hindi). Even I was angry with myself. But had I not touched that route, I would not have launched Raaj Kamal.

“We are in a trade (profession) in which we sell tickets. This is not singing seeking charity, the way how Thyaga Iyer (Saint Thyagaraja) sang about (Lord) Rama and begged on the streets of Thanjavur. I don’t have any interest in such an art like that.

“My desire is that tickets should sell, want to become like MGR (late matinee idol and founder of the All-India Anna Dravida Munnetra Kazhagam) M G Ramachandran), Sivaji (Ganesan). Then, why should I be adamant that I won’t make people happy?

“If they (people) don’t understand my art, I have to bring them to that level. Instead of that I can be living in a forest as a saint or live there itself bathing in slush or not having bath…”

The reference to Saint Thyagaraja, who is considered the prime among the trinity of Carnatic music, has raised the hackles of Carnatic musicians, who revere him much for their livelihood and professional success.

They have launched an online petition seeking the MNM leader’s apology for his comments on the Carnatic music trinity.

Stating that it is hard to find a parallel in any professional field as to how many thousands or millions of families’ incomes are generated owing to significant contributions of a single person to the field, the petition said.

The specific reference to Saint Thyagaraja and Lord Rama suggested that a specific religion/caste was being targeted and it was an insult to the followers of this faith.

“... we artists from the Carnatic music fraternity strongly object to the pointed reference of a holy saint whom we all revere and demand an apology for your malignant and despicable remarks against him carried out intentionally or otherwise,” the petition said.

Ramaprasada told the media that before launching the petition, he had heard the video many times before coming to the conclusion that the Carnatic music trinity had been insulted by the veteran actor-turned- politicians.

Various other Carnatic music artistes have signed the petition, criticising Kamal Haasan and seeking an apology. The MNM founder is yet to react to the controversy surrounding his comment.