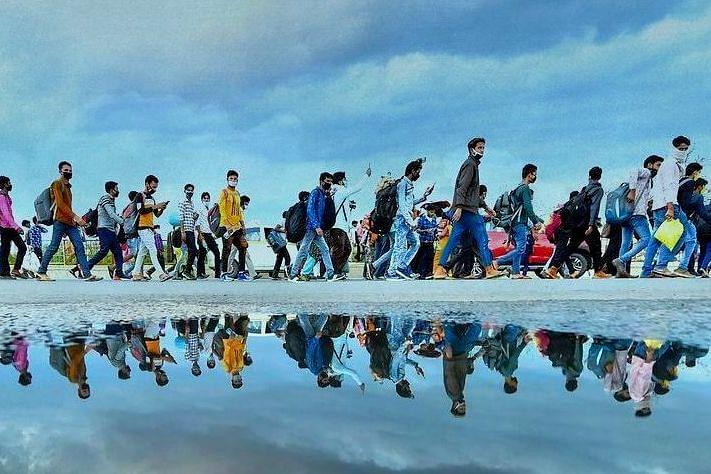 Migrant workers returning to their villages.

About 30 crore mandays employment has been provided to migrant workers, who have returned to their villages in Bihar, Jharkhand, Madhya Pradesh, Odisha, Rajasthan and Uttar Pradesh under Garib Kalyan Rojgar Abhiyaan (GKRA).

A total of Rs 27,000 crore has also been spent in pursuit of the GKRA objectives.

The government is taking initiatives on a war footing under GKRA aimed at empowering villagers by creating livelihood opportunities in 116 districts in these states, according to the Rural Development Ministry.

More than 1.14 lakh water conservation structures, about 3.65 lakh rural houses and nearly 10,500 community sanitary complexes have been created under the abhiyaan.

According to the ministry data, 6,727 works have been taken up through district mineral funds, 1,662 gram panchayats have been provided Internet connectivity, 17,508 works related to solid and liquid waste management undertaken, and 54,455 candidates have been provided skills training through Krishi Vigyan Kendras (KVKs) under the abhiyaan.

The success of this programme can be seen as convergent efforts of 12 ministries/departments and state governments, which are giving higher quantum of benefits to the migrant workers and rural communities.

GKRA was launched to boost employment and livelihood opportunities for migrant workers returning to villages and similarly affected citizens in rural areas, in the wake of Covid-19 outbreak.

The stage is set for longer term action for a longer term initiative for jobs and livelihoods for those who chose to stay back.