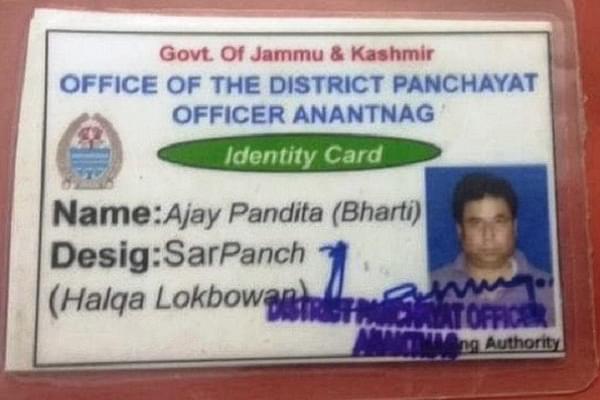 The Global Kashmiri Pandit Diaspora (GKPD) has condemned the assassination of Sarpanch Ajay Pandita (Bharti) in Kashmir and has asked for an inquiry to find why there was a lapse in providing security to him when he had requested so based on the threat perceptions. It has also asked the Centre to summon the Pakistan High Commissioner to convey the nation's sentiment that it holds Pakistan culpable for the state sponsorship of the genocide and ethnic cleansing of the Kashmiri Pandits.

The GKPD in collaboration with several Kashmiri Pandit organisations across the globe organised a webinar on Tuesday (9 June) to protest and condemn the dastardly killing of the Sarpanch. Various speakers from India, the US, the UK, Australia, New Zealand, Mauritius, Thailand and Canada condemned the heinous crime and made suggestions on the way forward.

Utpal Kaul, GKPD India coordinator, while chairing the meeting said, "The murder was one in a series of atrocities committed against our community. Ajay Pandita ji had returned to his Kashmir, our Kashmir and was serving his community."

The GKPD has asked the civil society, the Indian political parties, the Government of India and nations around the world to join the Kashmiri Pandit diaspora in their fight against their continuous genocide and targeted ethnic cleansing.

In a resolution, the diaspora body said, "The cold-blooded murder of Sarpanch Ajay Pandita outside his home in Anantnag by members of a radical, violent, Islamist organization aided, abetted, and controlled by Pakistan. The Kashmiri Pandit community will no longer tolerate being treated as a sacrificial lamb."

The global body of the Kashmiri Pandits has asked the State authorities to disclose the FIR and pursue the killers with speed and dispatch so that the justice is done.

It has demanded an administrative enquiry as to why there was a lapse in providing security to Pandita when he had requested for security as he was felt the need based on the threat perception.

In the resolution, it has demanded that the Ministry of External Affairs summon the Pakistan High Commissioner and convey the sentiment of the Indian nation that it holds Pakistan culpable for the State sponsorship of the genocide and ethnic cleansing of the Kashmiri Pandits over the decades since 1990.

The GKPD has recommended that the new Domicile bill be extended to all those who were residents of the State starting from 1885, the cutoff year for the Permanent Resident Certificate, as further enshrined in the 20 April 1927 notification, which was enshrined in the Delhi Act agreement with Sheikh Abdullah. It has also recommended a waiver of the 10 year requirement in the Domicile bill for those Central government employees who have done military or police or intelligence duty in Kashmir irrespective of tenure length and who can play a role in the internal security of a future settlement of the Kashmiri Pandits in the valley.

The body has requested the Government of India to remove barriers to the grant of gun licenses to those Kashmiri Pandits who seek it as they return to the valley whether for a job or settlement. It has urged the Centre to engage with it based on the #recogniseKPgenocide Memorandum submitted to the Prime Minister of India, which is a comprehensive pathway towards a homeland solution is the only way forward which will prevent the Kashmiri Pandits from continuing to be sacrificial lambs.