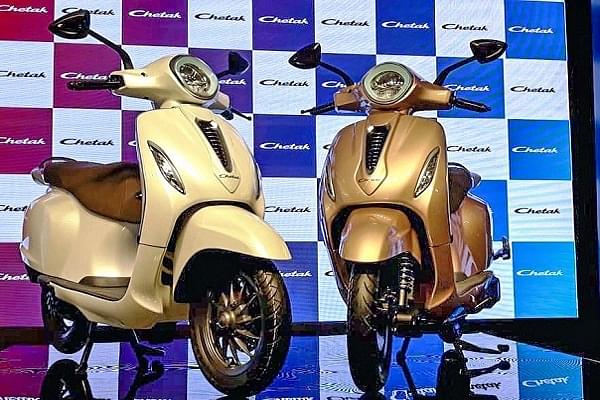 For millions of Indians, in the 90s or early 2000s Bajaj Chetak was synonymous with a go to vehicle choice for urban middle class Indians. If you did not own a Bajaj Chetak scooter, you surely knew someone who did.

Powered by a 150 cc two stroke (revamped to a four stroke in 2002) engine and a four speed manual transmission, the Bajaj Chetak was fondly synonymous with the Hamara Bajaj slogan.

The illustrious chapter in India’s two wheeler motoring history ended when Bajaj discontinued the model in 2005. The company stopped making two-wheeler scooters in 2009 but has now decided to make a comeback.

As part of its comeback tour, Bajaj has decided to throw in a dash of nostalgia by relaunching the beloved Bajaj Chetak - with an electric twist.

As reported, Bajaj announced a return of its Chetak in form of an electric scooter on Wednesday (16 October). The Chetak will be powered by a 4 kilo watt (kW) motor to offer a range of 85 km and 95 km in Econ and Sport mode respectively. It also comes with a reverse gear.

The scooter will be available in the market come January and Bajaj has promised that it will be priced “competitively”. The price will be revealed before dispatches begin.

It will initially be available to customers in Pune and would soon be expanded to Bengaluru. Bajaj will take a call on expanding its sales to other cities after gauging the market response.

All set to be built in the company’s Chakan plant in Maharashtra, the e-scooter may also be exported to various European countries.

The Chetak’s design retains features of its vintage compatriot but inculcates modern elements like LED display metre, headlamps, a lock switch and key less start. It will also get an oval LED strip around the headlamp, LED side blinkers and black front grille.

It will be fitted with two MRF Zapper tubeless tyres wrapped around 12-inch wheels with a disk brake in the front.

Bajaj had recently opposed the Central government’s rule proposing to shifting all two and three-wheelers to electric/ battery powered supply in the next few years.

Baja Auto’s managing director Rajiv Bajaj had criticised this proposal by commenting that the Indian auto-industry does not have any meaningful experience with the electric vehicle (EV) technology to make such a quick and drastic transition.

Now, while announcing Chetak 2.0, Bajaj commented that there is immense potential for electric two and three wheelers. He though stated that the Chetak is not designed to be a mass product but is rather expected to be part of a niche segment.

He added that the biggest hurdle to electric mobility is the manufacturers’ unwillingness to compromise on petrol, diesel vehicle sales. Bajaj stands unique in this respect as it currently has not scooter in production which avoids a possible conflict of interest.