Govt Responded To Private Sector Demands But Now It Is Failing To Pick Up 25 Per Cent Vaccine Quota: Piyush Goyal 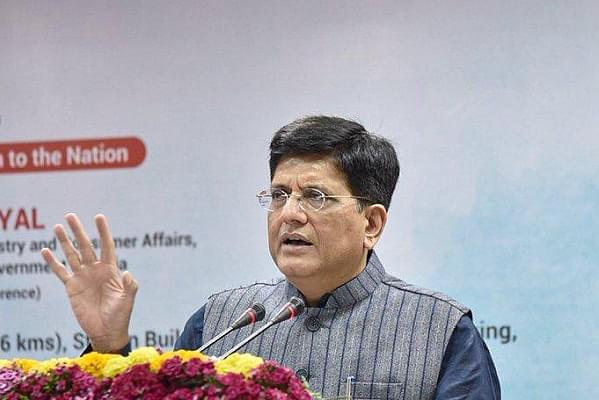 The Government of India has expressed its displeasure at the private sector not lifting its mantle of COVID-19 vaccination in the country.

Commerce and Industry Minister Piyush Goyal on Saturday said that while the Union government had been “responsive” to the demands of the industry, the latter was failing to pick up the 25 per cent quota of COVID-19 vaccines allotted to it in adequate quantities.

"The government would ensure that everyone in the country got free vaccine with or without the sector’s help," he said while addressing the plenary session of the CII-Horasis India meeting.

He said that the Union government accepted the demands of the industry and the state governments for a greater say in the vaccination drive; and the business groups had made lofty promises about going to the hinterland and administering crores of jabs, but had failed to deliver.

“You demanded and I remember how much you all fought with me and sought that vaccination be opened up for the private sector. Today, you are not even buying those 25 per cent of vaccines [allotted to you],” Goyal was quoted as saying by The Hindu.

“Please also calibrate your actions once you get what you demanded… But don’t worry, our government is committed to providing free vaccine to everybody that is eligible irrespective of whether the private sector does take the 25 per cent quota,” he added.

“I remember one industry group said, ‘I will do one crore vaccinations’, and another said, ‘We will go to remote areas and do it.’ Nobody has gone to Bihar, northeast, Jharkhand and Chhattisgarh to run campaigns to remove vaccine hesitancy and use up that 25 per cent quota,” the minister said

He further added that the vaccination was critical to the economy’s turnaround and that the government expected almost every adult to have at least one dose by December 2021, and most getting the second dose too.

Notably, as per a TOI report dated 4 June 2021, an analysis of actual inoculations till 30 May showed that private sector accounted for only 7.5 per cent jabs despite 25 per cent quota of COVID-19 vaccines.

Notably, when the vaccination started this year in January, private sector was lobbying the government to administer the vaccines in a public-private partnership model with price regulation. The private players argued that this would speed up the vaccination drive.

The analysis revealed that

The minister said that vaccine hesitancy remained a concern.

“When vaccination started, recall the hesitancy. Even today, in Delhi, a very enlightened city, 20 per cent of the frontline workers who started getting vaccinated six months ago, are still not jabbed, and a lot of places have hesitancy,” Goyal said. He urged the industry bodies like Confederation of Indian Industry (CII) to run campaigns to spread awareness about the COVID-19 vaccine among the people.

“Obviously, we have 1.3 billion people, the U.K. has 60 million. If you compare the percentages, it is quite irrational if you ask me,” he said.

“India should be proud of being the world’s largest vaccinator” with about 42-43 crore jabs already completed. “Our run rate is now 12 crore or so every month and soon to become 15 crore in the next one or two months and possibly, 20 crore by the end of the calendar year,” he added.