Govt Would Rather Talk To Kashmir's Youth: Amit Shah On Farooq Abdullah Seeking Talks With Pakistan 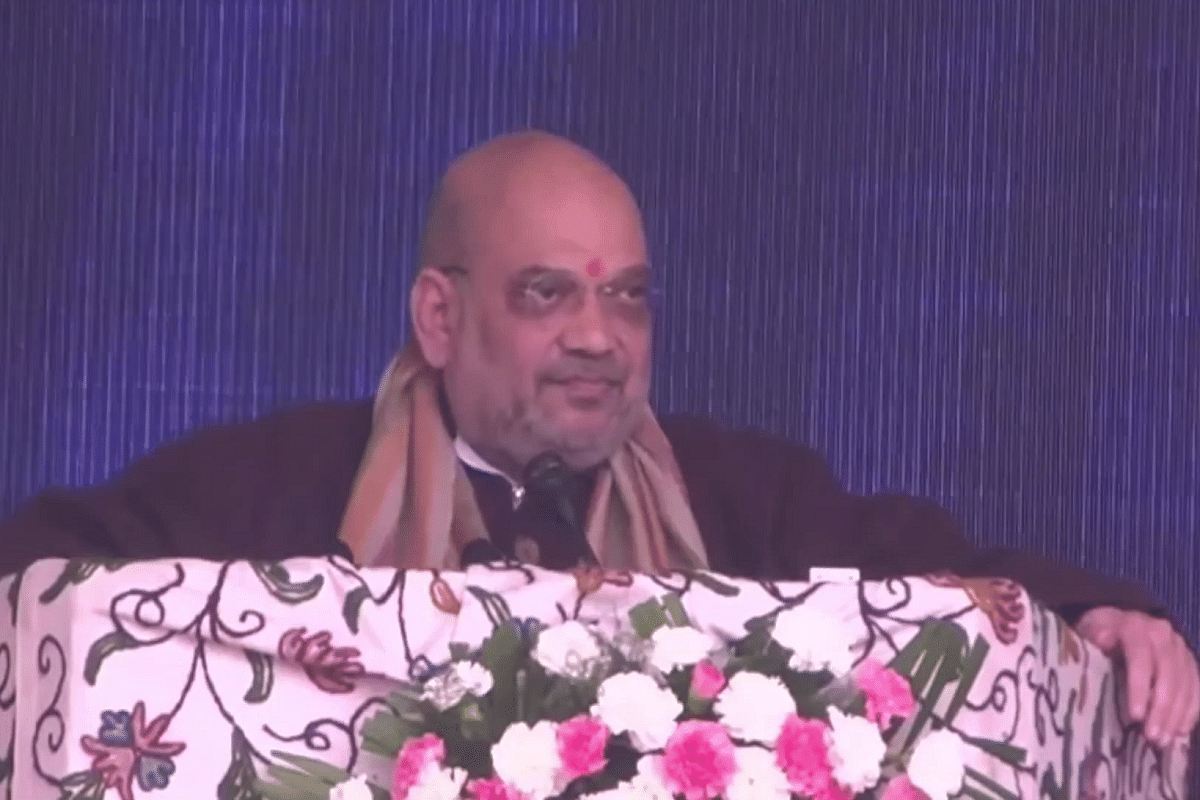 Union Home Minister Amit Shah on Monday (25 October) said the government would rather hold talks with the youth and "brothers and sisters" of the Valley than Pakistan as suggested by National Conference president Farooq Abdullah.

He also said the only intention behind repealing Article 370 was to put Kashmir and Jammu on the path of development, and people will see the "fruits of our efforts by 2024".

The home minister, who arrived in Jammu and Kashmir on Saturday for his first visit since the abrogation of Article 370 in August 2019, remotely inaugurated several development projects and laid the foundation stone of some.

Before beginning his 38-minute-long speech at a function here, the home minister got the bullet proof glass shield for the speaker removed.

Later, he told the audience that he likes to have a "mann ki baat" (talk straight from his heart) with the people.

"I was cursed and criticised bitterly and today, I wish to talk to you with an open heart without security and without any bullet proof glass. And, here I am in front of you," Shah said while speaking at a heavily guarded Sher-e-Kashmir International Convention Centre.

"Friends, today I saw the newspapers where Farooq (Abdullah) Saheb has suggested to me that the government should engage in talks with Pakistan. Well, he is a seasoned politician, who has been the chief minster of (erstwhile) state, and this is his suggestion, but I would like to tell Farooq Saheb that if talks are to be held, I would like to hold it with brothers and sisters of the Kashmir Valley and the youth of the Kashmir Valley," the home minister said.

On the abrogation of Article 370, he said repealing it had only one 'pakeeza' (pious) intention that is to put Kashmir, Jammu and newly created Union Territory of Ladakh on the path of development.

"You will see the fruits of our efforts by 2024," Shah, who donned a traditional Kashmiri pheran, said.

The minister also said, "The next time they (local politicians) mislead you about land being snatched after repeal of Article 370, tell them how much land has been taken away in your village or area. No land has been snatched in the two years since August 2019."

Shah inaugurated a 500-bed hospital at Bemina, completed at a cost of Rs 115 crore, laid the foundation stone for the Handwara Medical College, a Rs 46-crore steel girder bridge over the Ferozepur Nallah in Baramulla district and road projects worth Rs 4,000 crore, among others.

The home minister, who is on his Jammu and Kashmir visit's third day, said that those who advocate talks with Islamabad and separatists should be asked what has Pakistan done in Pakistan-occupied Kashmir (PoK).

"Compare the development between this side and PoK. Do they have electricity, roads, healthcare and toilets for women. There is nothing (on the other side). You (Kashmiris) have the same rights as any other Indian does," he said.

Without naming Congress, National Conference and Peoples' Democratic Party, he said while only three medical colleges were set up by the "three families which have ruled Jammu and Kashmir", Prime Minister Narendra Modi has ensured seven new medical colleges and these are coming up.

Shah said schemes and plans of the Modi government will ensure that J&K is the most developed province of the country.

He sought the cooperation of the people to realise this dream.

"It is only the youth of J&K who can work towards achieving this goal," he said, adding "we want that the youth of Kashmir pick books and not stones, pick tools to brighten their future and not arms."

Asserting that the government is aiming to wipe out terrorism and put an end to civilian killings in J&K, Shah said nobody will be allowed to disrupt peace and development in the Union Territory, which has a special place in Prime Minister Modi's heart.

Defending the curbs on internet services and imposition of curfew in the aftermath of abrogation of Article 370, he said that "some people would have misled the masses. Who would have been killed? The Kashmiri youth. We know how heavy the coffin of a young son is for an old man".

He said 40,000 people have been killed in Kashmir in violence and it should stop now.

"This many people do not die even in wars. We have to come back and take Kashmir to new heights of development," he said.

The minister said Rs 12,000 crore worth of investment has already come to the Union Territory and the government aims at a total of Rs 51,000 crore by the end of 2022 to provide five lakh jobs to the local youth.

Shah said "three families" are answerable to the people for their failure to develop J&K over the past seven decades.

"The new phase of development under the leadership of Modi has started in J&K but attempts are being made by inimical elements to create hurdles. I have come here to assure you that nobody will be able to create a hurdle and disrupt peace and development," he said.

He said a new phase of development has started and this cannot be stopped.

Shah said five lakh jobs are being created in Jammu and Kashmir, while 20,000 people have been provided government jobs in the past two years.

Shah accused the "three families" of ruining the tourism industry of the erstwhile state of J&K. However, he said, "from March 2020 to March 2021, 1.34 lakh tourists came to the valley" and claimed it to be highest since independence.