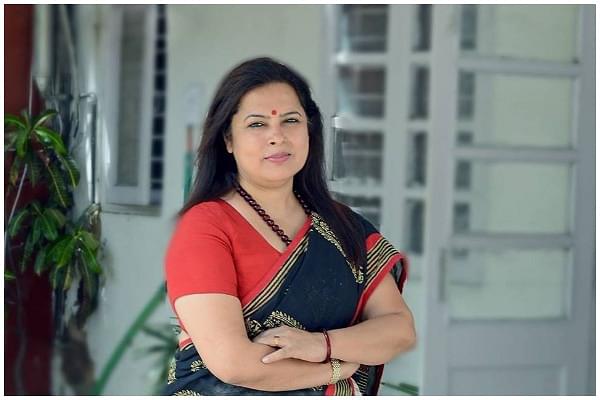 Earlier today and during the hour when the Bharatiya Janata Party (BJP) was welcoming Jyotiraditya Scindia to its family and fold at the party headquarters, Member of Parliament from BJP Meenakshi Lekhi charged into the opposition, and lashed out at the Congress in Lok Sabha.

Lekhi was responding to a long-pending discussion on the recent riots and the violence that rocked parts of North East Delhi.

She is reported to have said that it was due to the government's efforts at the Centre that the violence ended in 36 hours.

In a video which is part of this report, she said, "Some judges think police shouldn't act until protests turn violent... Under the circumstances, it is difficult to gauge when a peaceful protest will turn violent".

Lekhi enlisted the hate speeches that came from the opposition.

She added that the gathering at Shaheen Bagh began a day after the statements from the Congress leaders. "For three months these people obstruct the roads of Delhi."

On the opposition inciting people to take to the streets, she then mentioned Omar Khalid's controversial speech where he mentions the visit of US President Mr Donald Trump.

In her speech, Lekhi pointedly mentioned events and inciting speeches from the opposition in a sequence. She then cited the controversial speech from Waris Pathan.

She also questioned the blaming of Kapil Mishra for the deeds of Sharjeel Imam, who is the activist booked under several cases for allegedly delivering inflammatory speeches during the anti Citizenship Amendment Act (CAA) protests.

She added several other mentions to her tirade against the opposition, including the reference to the molestation of minors, the protecting of gun wielding man Shahrukh, the branding of PM Narendra Modi as "qaatil" and of Home minister Amit Shah as "tadipaar".

In an indirect mention, she slammed the opposition, by describing them as those people from under whose feet power has vanished, and those who indulge in minority vote bank politics.

She added, "For how many things would you blame Kapil Mishra when people responsible for rioting and violence were certainly other people?"

She questioned the reason for violence and said that the anti-CAA protests which started at JNU and Jamia University opposed the very idea of inclusion of persecuted minorities in countries such as Pakistan by providing them citizenship.

When countered by the opposition on the mention of the universities, she said that the members would do well to watch video footage from the Jamia library.

The report mentioned above quotes her as saying:

"Some people have a history of setting things ablaze. I have data which shows who was responsible whenever incidents of violence took place in country."