Here’s Why Telangana, Andhra Witnessed A Torrential Downpour And How Hyderabad Got Inundated 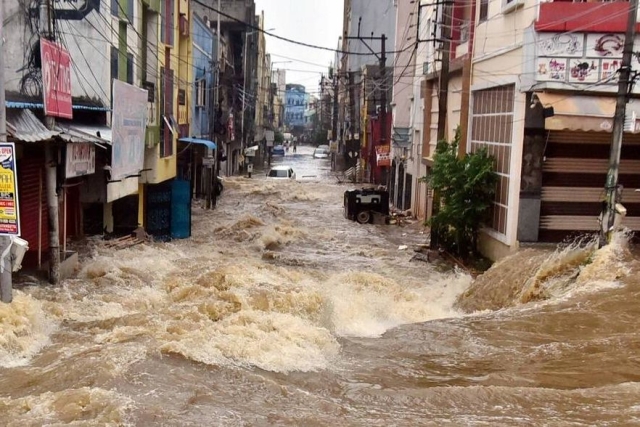 Inundated Hyderabad received its heaviest rainfall in 117 years yesterday (14 October) with vast sections of its population being affected badly.

Local reports have put the number of those dead from the heavy rains at around 30 but the figure will likely increase over the next 24 to 48 hours as many missing people have been unaccounted for so far.

Parts of Telangana, too, have been affected by the heavy downpour during Tuesday and Wednesday.

Record rains lashed Hyderabad, other parts of Telangana and some parts of the country such as Karnataka and Maharashtra under the influence of a deep depression in Bay of Bengal.

The deep depression weakened when it entered Telangana after wreaking havoc in Andhra Pradesh on Tuesday. Andhra Pradesh has also reported a torrential downpour but Hyderabad seems to have suffered the worst.

However, the worst seems to be over for Hyderabad, Telangana and Andhra Pradesh. The intensity of the downpour on the Telangana capital can be gauged from the fact that Hyderabad received 20 cm of rainfall on a single day.

That amount is equivalent to 25 per cent of the rainfall the city receives in a year (80 cm). Some of the areas around Hyderabad, particularly Rangareddy district, have received about 30 cm rainfall but the impact has not been as severe as the Telangana’s capital.

The main reason for Hyderabad getting flooded is encroachment of lakes — a grim reminder of the December 2015 Chennai floods. Most of the housing colonies that were flooded on Wednesday abutted water bodies and tampered with water channels.

For example, LB Nagar was among the worst affected by the flooding of waters in Hyderabad. Water overflowed from the Ramanthapur lake at LB Nagar, while the nearby Saroornagar lake added to the people’s woes.

It is feared that paddy crops, banana, papaya trees, drumstick trees and horticultural crops could have been affected by the current torrential spell of rains in Andhra Pradesh and Telangana.

The depression, which skipped Tamil Nadu to provide its annual downpour during this time, has now weakened and is moving inwards. This will likely result in heavy rains in parts of Karnataka and Maharashtra.

Weather experts see the rainfall as a fallout of the setting in of La Nina conditions, which occurs when the floor of the Pacific Ocean becomes cooler than usual. When the ocean surface temperature becomes warmer than usual, we experience El Nino conditions resulting in drought.

La Nina follows El Nino and this could be a fallout of the drought-like conditions that prevailed during the middle of last year. This will also mean that this year, winter will see intense and frequent cold wave sweeping across the country.