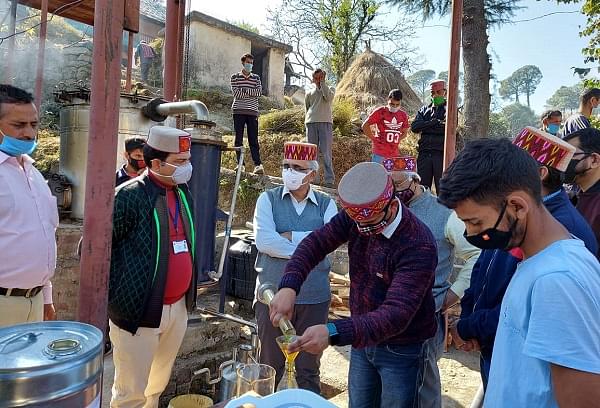 Extraction of oil from marigold in Chamba (@shekhar_mande/twitter)

Farmers in the Chamba district of Himachal Pradesh, keen for new livelihood options to supplement their income from traditional crops like maize, paddy, and wheat, have found a new lease of life.

Cultivation of aromatic plants has given them additional income. They are extracting essential oil from the improved variety of wild marigold (Tagetes minuta) that has been introduced, and the profit from wild marigold oil has doubled the income of farmers as compared to traditional maize, wheat and paddy crops.

The improvement in the fortune of the farmers has been brought about through interventions made by Society for Technology and Development (STD), Mandi Core Support group, SEED Division, the Ministry of Science and Technology said in a statement.

A distillation unit of 250 kg capacity was installed at Parwai village and farmers trained in agro-technology of wild marigold, extraction of oil, packing, and storage of oil started cultivating wild marigold and distilling oil from it.

The extracted oil is being sold at Rs 9500 per kg and used in preparing perfumes and essences by pharmaceutical industries. The income of farmers which was around Rs 40,000-50,000 per hectare from traditional crops have increased to about Rs 1,00,000 per hectare by cultivation and extraction of wild marigold oil.