How Two Young Forest Officials Fought To Save Tigers, Including Tigress Avni’s Cubs 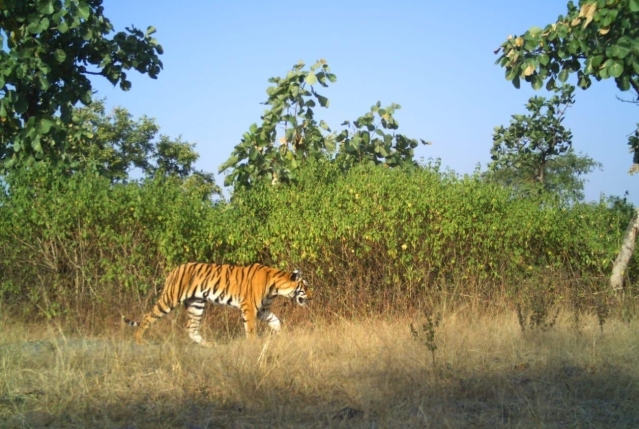 One of them is a woman forest guard, who wanted to prove that the notion that tiger monitoring is a male dominated field is wrong, and the other, a multi-faceted pro at wildlife crime detention, who also happens to be a sportsman.

They are among the six achievers of frontline staff from across the country to have been honoured.

According to reports, the reward consists of Rs 1 lakh and a commendation certificate.

Sidam's job was towards a family she considered her own. She was monitoring the movement of ‘T1’, who is also known by the name ‘Avni’. Also to be monitored were the two cubs of Avni.

The story you must read. How a lady forester spent 45 days & located orphaned cubs of Tigress Avni in Yavatmal. Dealing with patrolling, baits, camera traps & now she is recognised by @ntca_india for her work.

Sidam was driven by an emotion towards Avni's family, whom people dubbed as ‘man-eaters’. Tigress Avni, according to a report, had killed 13 people in villages falling in the Pandharkawda and Ralegaon tehsils.

Sidam was initially posted as a computer operator owing to a not very encouraging scene at her work front. Then, with deputy conservator KM Abharna taking over in 2017, Sidam saw a thrilling posting to the field. She received encouragement from her boss.

An evening totally changed the meaning of her new duty and task. Sidam was on her way to install camera traps in her beat. While she was maneuvering the details of her work, Tigress Avni came out and left without harming  her. Sidam was unaware of its presence. This moment made her fear of Avni disappear.

She began to monitor the tigress and her cubs. The work involved laying baits, patrolling on foot and laying out impression pads — a task pug marked by intense risks to her own life.

Coming to Sarda, his exceptional work sprang from seven years of dedication at MTR. He has contributed to ‘detecting tiger, leopard and other wild animal poaching cases’ in the reserve. His work includes ‘arresting 20 accused in three tiger poaching cases, court granting them imprisonments, giving live locations of accused to Mumbai, Delhi and other places, etc.’

Sarda told the Times of India in this report that he, along with his mentors, ‘took crime cases to their logical end due to intelligence network, proper documentation and collection of evidence...’ and tracking of the culprits through the call data records in different zones.

He is also an archer. He recently bagged a silver in archery at the national games held in Odisha. For his wildlife crime detection, which he attributes to team work and guidance from mentors, he has won a gold from former Maharashtra CM Devendra Fadnavis.

The killing of Avni or T1 in 2018 had led to outrage among animal lovers and wildlife organisations worldwide.