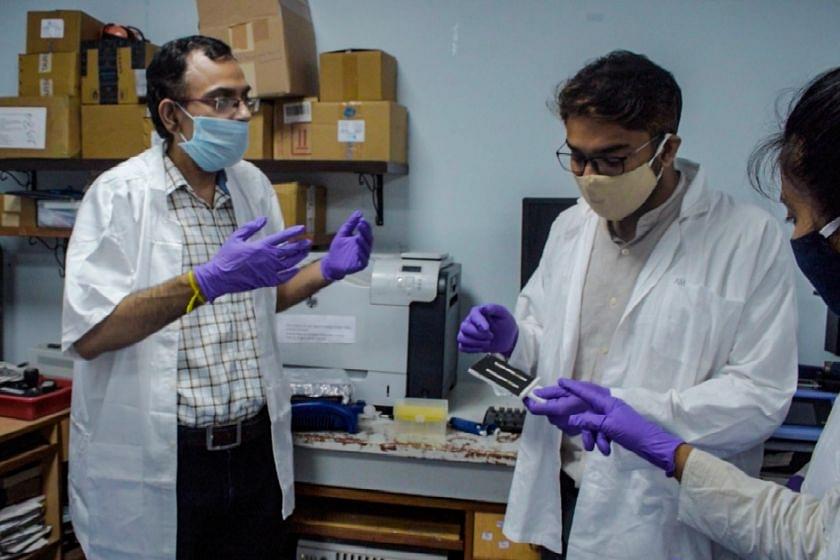 Indian Institute of Technology (IIT) Kharagpur on Saturday (25 July) said its researchers have developed a portable diagnostic device that can detect Covid-19 infection in 60 minutes at an estimated cost of Rs 400. This entire non-invasive saliva-based test can be conducted in an ultra-low-cost portable enclosure as an alternative to specialised laboratory equipment, IIT Kharagpur said.

The technology essentially deploys a disposable simple paper-strip for chemical analysis and visualisation of results.

The synthetic RNA is exactly the same replicate of the viral RNA extracted from infected patients, as per accepted scientific benchmarking procedure.

"The unique portable device developed by the IIT Kharagpur researchers has not only been validated for the diagnostics of Covid-19, but also been designed to be capable of detecting any other kind of RNA virus by following the same generic procedure," Arindam Mondal, Assistant Professor, School of Bio Science, IIT Kharagpur, said in a statement.

"The impact of this, therefore, is long lasting, empowered by the capability of detecting unforeseen viral pandemics in the coming years that may potentially endanger human lives time and again."

The new device has been designed to be usable at locations with extremely poor resources.

Moreover, it can be operated by minimally trained personnel, precluding the needs for skilled technicians.

"The RT-PCR based tests suffer from a compelling constraint of requiring an elaborate laboratory-infrastructure and support system including the operational and maintenance cost, to perform the test," said IIT Kharagpur Professor Suman Chakraborty.

"The alternative existing approaches to these tests, on the other hand, are either invasive (blood tests) and non-indicative of early stage of development of the infection, or dependent on reagents that are extremely unstable and cannot be implemented in resource-limited settings," Chakraborty said.

The equipment developed by IIT Kharagpur researchers will cost about Rs 2,000 if a pilot facility is used.