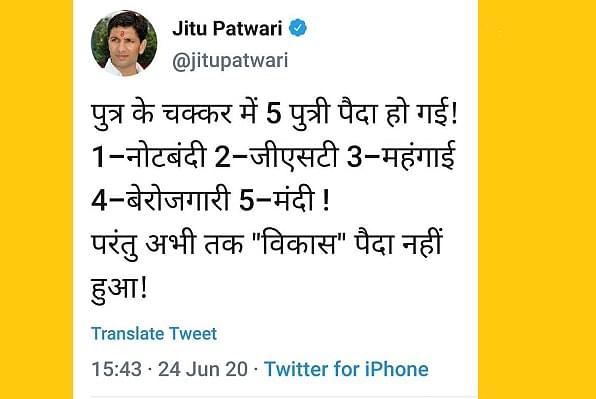 Madhya Pradesh Congress has been involved in yet another controversy. This time it is the state congress leader Jitu Patwari who faced flak on social media over his sexist and misogynist tweet.

In a now deleted tweet, Patwari tried to compare the birth of a girl child with the failures of Modi government schemes.

Madhya Pradesh CM Shivraj Singh Chouhan hit out at Congress MLA Jitu Patwari and said, “At a time when the entire nation is proud of the sacrifices made by the likes of Rani Durgavati, Congress is busy insulting our daughters.”

“Please take note of this highly misogynistic tweet of an elected representative which projects daughters as unwanted and in most regressive manner. This should not go unpunished,” he said.

One user wrote, “People like him are the reason why girl child is still a non acceptence.”

Another wrote, “Bad analogy used. This tweet reeks of bias against the girl child. This very mindset has killed @INCIndia. this is a real face of Congress. really shameful tweet by Jitu Patwari. @priyankagandhi should clarify what she thinks about this tweet.”

Similar remarks were made by multiple users.

It should be noted that earlier this month the MP Congress unit had faced criticism from netizens over another sexist remark.

The official twitter account of Madhya Pradesh unit of the Congress Party, on 11 June, tweeted a photo of a woman in uniform sitting In what seems like a liquor shop. The tweet said that under the BJP-led government in the state are insulting women by making them sell alcohol.

Apart from being a dubious claim, the tweet by MP Congress also carried a sexist and misogynistic undertone.

Several netizens pointed out that in the 21st century, if a woman can consume alcohol, they can also sell it. One user recalled a move by the previous Kamal Nath government to open women-friendly liquor shops. They termed the remarks as being regressive and insensitive to women.