Ram Janmabhoomi: Here’s All About Nihang Sikhs Who Performed Ram-Nam Havan Inside Babri-Structure In 1858 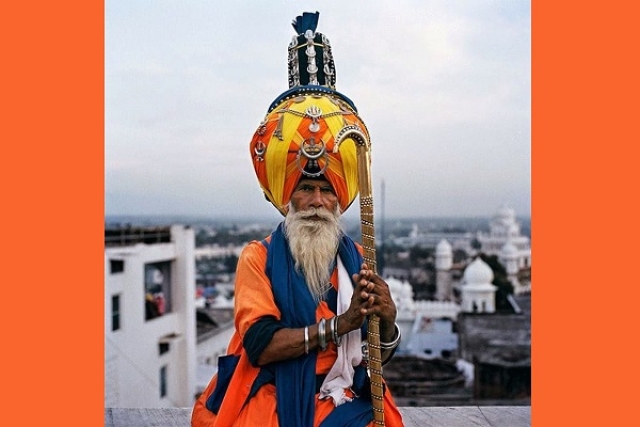 "Go and tell Aurangzeb that if he can convert Guru Tegh Bahadar to Islam, they will all convert. Otherwise he should leave them alone"

Guru Tegh Bahadur’s voice brought relief to the Kashmiri Pandits who had gathered at Chak Nanki, Kahlur (now known as Anandpur Sahib). The Pandits had been given an ultimatum by Mughal emperor Aurangzeb that they should convert to Islam or face death.

In the summer of 1675, the Guru, along with his companions were brought to Delhi and asked to convert to Islam or else face the penalty of death by the Mughal emperor. He was also asked to prove his powers by performing a miracle. The revered Guru said occult powers were no proof of one’s nearness to the God.

Despite the inhumane torture, the Guru and his companions refused to convert to Islam. First his companions were tortured to death in front of his eyes, to coerce him into converting to Islam, and when the Guru didn’t budge from his faith, he himself was beheaded.

Describing the martyrdom of his father, Guru Gobind Singh writes in the Dasam Granth,

Guru Gobind Singh, who was present at the time of the meeting of the persecuted Kashmiri Pandits and his father as a nine-year old boy, went on to institutionalise the Khalsa, resisted the ongoing persecution by the Mughal Empire, and continued "the defence of Sikhism and Hinduism against the Muslim assault of Aurangzeb".

The Sikhs have a great contribution to the recent Supreme Court judgement that ruled in favour of a Ram Temple at the Janmasthan site.

According to an FIR dated 30th November, 1858, written by the Thanedaar (Policeman) of Awadh on complaint of Superintendent of Babri Masjid, 25 Nihang Sikhs had entered the Babri Masjid structure.

The FIR stated that the Nihangs were performing Hawan and other religious rituals there. It further stated that they inscribed,“Ram! Ram!” with charcoal on the walls of the Masjid.

The report says the Hindus had access to the birthplace of the Lord – The Janmasthan, which is outside the Masjid, but within the same complex, and that they had been visiting it for a long time, and now the Hindus had entered the Masjid and started worshipping there as well. Reportedly, Thanedar took a few weeks to evict the Nihang Sikhs from the Babri Masjid.

This document proved a great piece of evidence that Muslim parties didn’t have exclusive ownership of the structure.

Who are Nihang Sikhs?

Some accounts trace the origin of the Nihang warrior attire to Fateh Singh, the youngest son of Guru Gobind Singh.

The story goes that one day, as his older brothers were practising battlefield skills, little Fateh Singh also wanted to play with his brothers. But, they refused, saying: “At the moment you are too small.”

Let down by his older brothers, little Fateh Singh went inside the palace and tied a dastaar (turban) as tall as one hand, put on a blue dress and adorned himself with a small Khanda. He placed a Chakar (round disc carried on a belt or worn on the turban) on himself and carried his kirpan. Over his dastaar he wrapped a ‘dumalla’ and in his hand, he held a spear. He then went to where his brothers were playing and said, “Now I don’t look small.”

Seeing his young son in the warrior’s attire, Guru Gobind Singh said, “From this dress the Nihangs will be formed”.

The six-year old Fateh Singh was captured by Nawab Wazir Khan in Sirhind along with his 9-year-old brother Zorawar Singh. The Nawab offered to free them if he accepted Islam. Even at a young age, the boys refused, and were eventually bricked up alive within a wall.

Other accounts trace the origin of Nihangs to Guru Hargobind who set up schools to train an elite warrior class called the Akali Nihang after the Mughals executed his predecessor, Guru Arjan Dev, after he refused to convert to Islam.

Early Sikh military history was dominated by the Nihang, known for their victories where they were heavily outnumbered.

On Fateh Diwas celebrated each year the next day after Diwali (also known as ‘Bandi Chhor Diwas‘). Nihang organisations from all over Punjab visit in large numbers with horses, elephants and vehicles to participate in celebration. The Nihangs display their skills, including taming the horses.

With attires of electric blue colour, the Nihangs are adorned with different weapons from the head to toe. A distinguishing feature is their lofty conical blue turbans.

The steel-reinforced turbans were often pointed at the top and outfitted with a chand torra or trident which could be used for stabbing in close-fights. The turbans would be armed with a bagh nakha (iron claw) and several chakrams (a disc-shaped traditional astra).

Even today, on ceremonial occasions, the Nihangs wear miniature versions of pancha shastra in their turbans, namely the chakram, the khanda (sword), the karud (dagger), the kirpan, and the tir (arrow).

Apart from Jangi Kara (war bracelets that could be used as Chakrams), Nihangs also carried the traditional dagger carried by all Sikhs (kirpan). Traditional Nihang dress is known as Khalsa Swarupa.

A fully armed Nihang will bear one or two swords on his right hip, a katar (dagger) on his left hip, a dhala (buckler) made from buffalo-hide on his back, a large chakram around his neck, and an iron chain. Generally, the arms worn on the Nihang's person would be reserved until the hand-held weapons were lost.

The armour of the Nihangs consisted of sanjo or iron chainmail worn under an iron breastplate. The war-shoes had pointed iron-ends at the toe, capable of inflicting cuts and stab wounds.

There are also female Nihangs, known as Sighanis (Lioness).

An account of Christian Missionary Rev J Caldwell, in 1842, describes a Singhani as follows:

"Like the class of mendicants to whom she belongs, she was armed to the teeth. Over her shoulder was slung a sword, while her belt was graced with a large horse pistol, a dagger, and sundry other weapons of destruction.

Another sword hung by her side. Her turban was ornamented with a panji and five or six chakkars. The panji is an instrument made something in a form of a tiger’s claws, with five curved blades exceedingly sharp. The chakkar is a steel discus, of six or eight diameters, very sharp also, and no doubt a destructive weapon when hurled with sufficient force.

She was, certainly the most dangerous looking lady I ever saw… it appeared by her own statement that she was a widow, and that her husband was an Akali, that after his death she joined the sect and had remained with them ever since. She had, she stated been on a tour to the south of India, and had travelled a great deal since she had became a faqir.”

In Raag Aasa Guru Arjan Dev says: Being fearless, he becomes a ‘Nihang’. The Panth Prakash describes Nihang as a person who has forsaken the fear of death and is always ready to embrace martyrdom.

Guru Gobind Singh said that the Nihangs should be generous, and follow strict adherence to Dharma.

“When the sword is wielded, it will give out sparks like fireworks are going. Fighting in the battlefield in this way it will seem like a crocodile is coming out of the sea." The Mughal historians compared the ferocity of the Akali soldiers with that of crocodiles.

Nihang can be taken to mean an ‘immortal crocodile’. In line with the ancient tradition of the land, the name reflects combination of courage and bravery in fights (like a crocodile), and commitment to rise above narrow worldly pursuits in recognition of the timeless and infinite God.

On the festival of Hola Mohalla which falls one day after or the same day as Holi, the Nihangs gather in their thousands at Anandpur in Punjab and display their martial skills.

The shastar vidya that the Nihangs followed the techniques that had been passed down since ancient times and practised by the warrior classes.

Nidar Singh Nihang, a British scholar, martial artist and grandmaster regards it as an art form that has been looked after by many different creeds and cultures. He sees the Sikhs as the latest custodians of the art. His teachings include the idea that at the core of Shastar Vidya is meditation on the infinite and to see the God-‘the infinite’- in all things.

By the times of Maharaja Ranjit Singh, the Nihangs became somewhat sidelined as the visionary Sikh ruler realised that he needed a modern army to fight the British, and hired French officers to train his soldiers.

The defeat of Sikh empire by British Raj in 1849 sounded a death-knell for the community’s martial culture as the British forced the Sikhs to give up arms.

Today, very few teachers of the shastar vidya remain, and a fast-paced lifestyle means young children cannot devote the required time and hard-work to keep the art alive. Nonetheless, the Nihangs proudly display the legacy of the warrior classes of the Indian subcontinent.