In Pictures: Over 3 Crore Pilgrims Reach Haridwar As Part Of Ongoing Kanwar Yatra 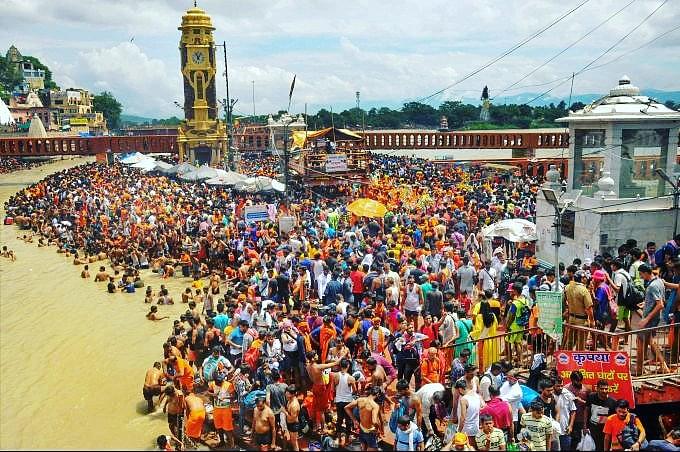 As part of the ongoing Kanwar Yatra, over 3 crore pilgrims have reached the holy city of Haridwar, reports ANI.

The Kanwar Yatra is undertaken by devotees of Lord Shiva, who fetch water from a source, often River Ganga, to offer it to their local shrine. The Yatra finds mention in the writings of 19th century British travellers who spotted such Kawariyas on their way.

The Yatra gained popularity in 1980s, prior to which it used to be done mostly by saints and old devotees. Today, it has become one of the largest annual religious gatherings, particularly in Haridwar.

The pilgrims travel barefooted and in saffron robes with their Kanwar (walking sticks used to hang the urns of water) for hundreds of kilometres by various routes and usually in groups made of family, friends and or neighbours.

The Yatris often find devotees waiting to offer them “Seva”. They wash their feet, apply medicines on injuries due to walking long distances, and offer them food etc.

Several Yatris are also seen carrying their parents, relatives and friends who are unable to walk the whole way.

The pilgrims come from the surrounding states of Delhi, Uttar Pradesh, Haryana, Rajasthan, Punjab, Bihar and some from Jharkhand, Chhattisgarh and Madhya Pradesh. Security measures are undertaken by the government to avoid inconvenience to common people and maintain order.

Guru Prakash, Assistant Professor at Patna University, argues that Dalit and OBC kanwariyas fill the ranks of pilgrims and thwart the liberal narrative of institutional oppression within Hinduism. He says the sheer festivity around the Kanwar Yatra creates an ecosystem that attracts multiple stakeholders, and they all benefit and survive harmoniously for the duration of the yatra.