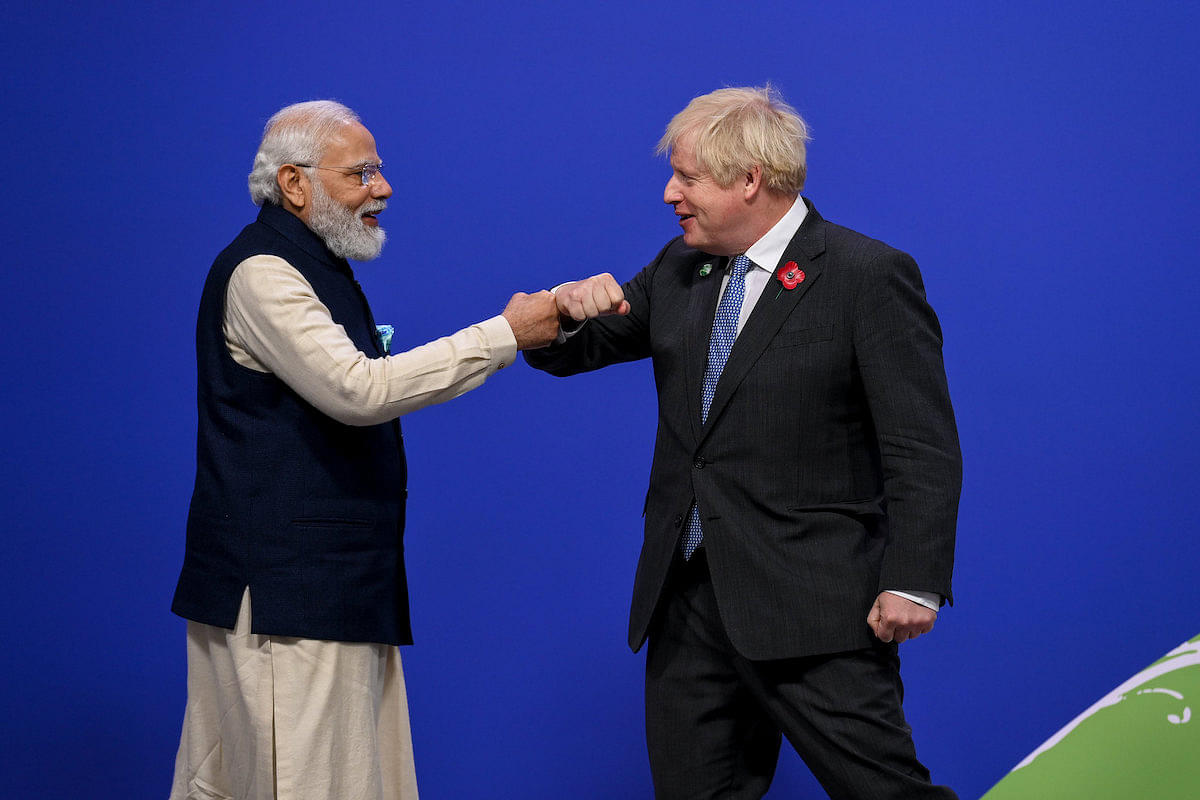 Bilateral relations between India and the UK are poised for transformative change at the start of British Prime Minister Boris Johnson’s two-day visit to India with the two countries looking at £1 billion new commercial deals and creation of a potential 11,000 plus new jobs ahead of his talks on Friday (22 April) with Prime Minister Modi on economic, security and defence collaboration.

The Johnson visit comes at a time when UK is looking at boosting bilateral collaboration with one of the world’s fastest growing economies, slashing trade barriers for UK businesses and driving jobs and growth at home. “As I arrive in India today, I see vast possibilities for what our two great nations can achieve together. From next-generation 5G telecoms and AI to new partnerships in health research and renewable energy – the UK and India are leading the world,” Prime Minister Johnson said, underlining the objective of the visit.

High on the agenda of Prime Minister Johnson will be to drive progress in the UK-India free trade agreement parleys which is expected to help double bilateral trade and investment by 2030. However, as the negotiating teams set up their third round of formal talks next week, several key issues stand out to be taken up on an urgent basis.

On the Indian side the focus would be on goods and while India already has a robust market access where pharmaceuticals are concerned, there would be a focus on textiles and garments, especially when the Indian textile industry is aiming at a potential $100 billion in exports by 2030.

For India, the trade deals it is working on with several partners like the UK, are strategically aimed at boosting exports by labour-intensive industries like textiles and it can do so by opening up to new technology, rare minerals and raw materials -- which are in short supply in India -- from the world at reasonable costs.

With Indian textile exports to Australia and UAE set to face zero duty, Commerce Minister Piyush Goyal is optimistic of the UK allowing zero-duty imports of Indian textiles. This is important, says former Commerce Secretary Rajiv Kher, as UK offers competing countries like Bangladesh and Vietnam several tariff advantages in textiles. “With Bangladesh, the UK has such arrangements because of the Least Developed Country status. Hence India would like to be equated with those competing countries and get tariff concessions in these areas,” says Kher.

One contentious point in the FTA negotiations, according to Kher, could be data security. “The UK has been a part of EU so far and therefore UK’s regulatory focus is driven by General Data Protection Rules of the EU. They are quite harsh and stringent rules and India does not have at the moment the equivalent of those rules because our data related rules are still in the making. I think that will be a hard point for India to negotiate,” explains Kher.

However, with India’s economic recovery and exports boom, New Delhi is in a position to offer a lot of other benefits. “Post Brexit UK is looking at the growing Indian middle class and the opportunity that the growing Indian economy will create to drive down commodity prices, technological tie ups in green technology and fintech as well as innovation to bolster its own economic well being,” points out Ambassador Anil Wadhwa, former Secretary East, Ministry of External Affairs.

“An FTA with India will result in commodities and labour intensive products at cheaper prices and allow UK to expand its presence in the services sector in India,“ says Wadhwa.

With an eye on the bonanza, UK and Indian businesses have confirmed £1.04 billion in new investments and export deals in areas from software engineering to health which will also create an estimated 10,906 jobs. A series of measures are expected to be announced to make it easier to export UK-made medical devices to India which will create opportunities for British med-tech companies like Redcar-based Micropore Technologies to sell their lifesaving products in India, an import market worth £2.4 billion.

India is set to gain big in terms of technology with wireless infrastructure manufacturer Radio Design plans to establish a new manufacturing centre in India, Carbon Masters investment to implement a waste management project in Bengaluru to reduce carbon emissions in a joint venture, joint UK-Indian venture Pandrol Rahee’s intent to set up a state of the art manufacturing centre in West Bengal and Deliveroo’ largest technology hub outside of the UK in Hyderabad.

Others like Cyanconnode has a £5 million deal to support Smart Meters in India, UK tech firm What3Words will partner with multiple Indian auto firms to provide accurate satellite navigation and contactless payments pioneers McLEAR will launch the first Smart Ring in India in a £10 million deal.

Seven Foreign Companies Among 61 Qualify Under PLI Scheme For Textiles With Total Investment Of Rs 19,077 Crore