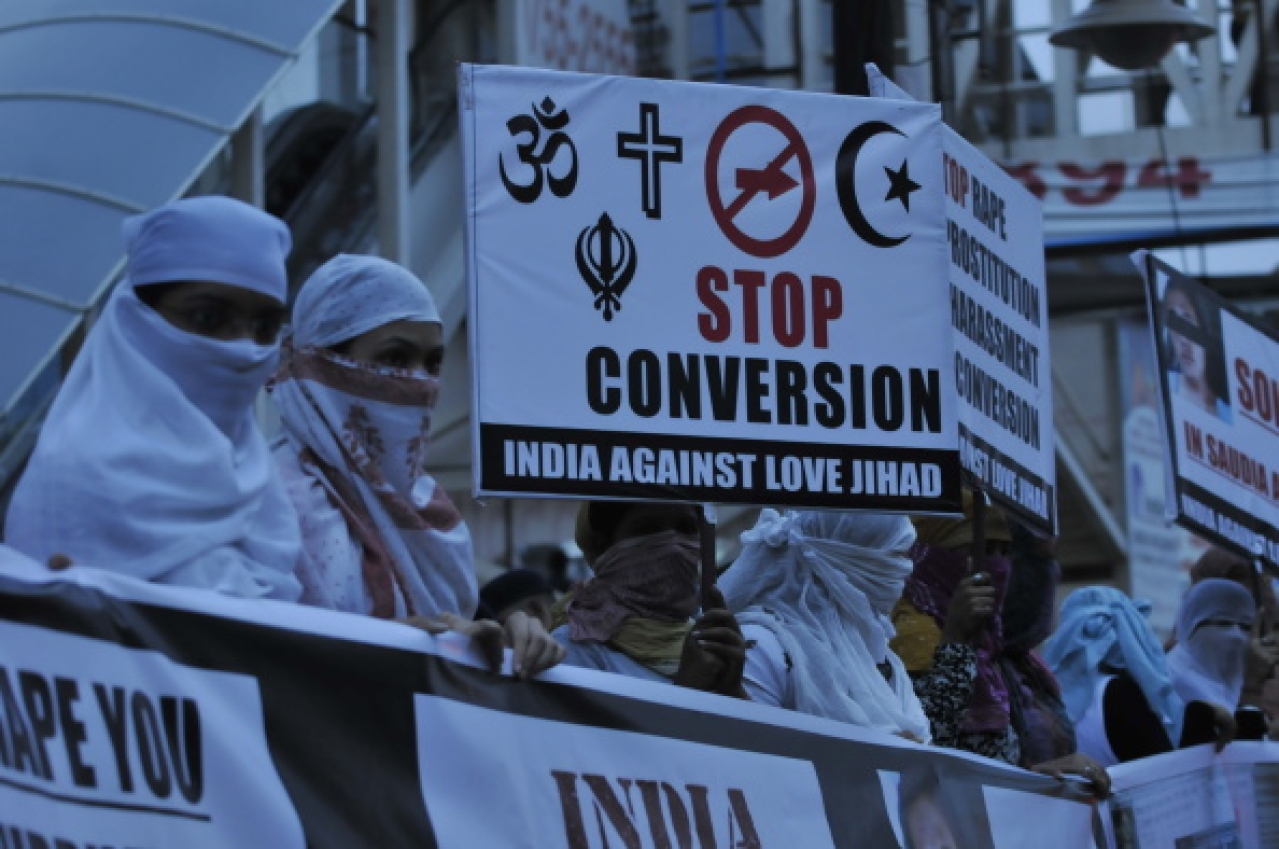 Women against love jihad hold placards to protest against the practice and conversion in Bhopal. (Mujeeb Faruqui/Hindustan Times via Getty Images)

One of the influential sections of Christians in Kerala — Syro Malabar Catholics — has come out in the open against “love jihad” in Kerala, saying it was threatening peace and harmony in the State.

Thalachelloor’s comments come at a time when Christians in India, led by their leaders, priests and bishops, are more occupied with protests against the Citizenship Amendment Act (CAA) 2019, which does not affect any citizen in the country.

Pointing out at a slew of reports, the synod of Syro Malabar Church said that Christian girls were being targeted and killed in the name of “love jihad” in Kerala.

Thalachelloor spoke to the media after the Syro Malabar Synod, a group of bishops, met on Tuesday (14 January) to discuss various issues affecting the church.

Incidents of “love jihad” — an attempt by Muslim men targeting non-Muslim women for conversion feigning to love them — were rising and its growth was alarming, Thalachelloor said.

The Syro Malabar Church spokesman pointed out at 21 persons leaving Kerala to join the Islamic State of Iraq and Syria (ISIS) and said half of them were Christians.

Besides, many women have been used for terrorist tasks through “love jihad”, though not formally, he said.

“Love jihad” is not imaginary, the synod said, blaming the authorities (police) for not preventing such incidents.

“Recently, there have been incidents in which women have been increasingly lured, raped, tortured and forced to convert. Authorities have failed to act cautiously in almost all these incidents,” it said.

This is the second time the Syro Malabar Church has come out against “love jihad”.

In September last year, following the alleged rape of an 18-year-old Christian girl by a 19-year-old Muslim boy, Thalachelloor charged that Christian girls were the most targeted and it was a “cause of great worry”.

He regretted that despite the Central Bureau of Investigation, National Investigation Agency and Intelligence Bureau reporting cases of “love jihad’, such incidents continued to occur.

“It is saddening and worrying that despite the existence of a mechanism to counter efforts by religious terrorist groups to entrap gullible girls, these are not being tackled efficiently,” he said in a statement then.

Vice-Chairman of the National Minorities Commission, George Kurian, has taken up this issue with Union Home Minister Amit Shah. He has sought a probe by the National Investigation Agency (NIA) into the conversions of Christian girls to Islam.

Kurian also alleged that the Left Democratic Front (LDF) in Kerala, headed by the Communist Party of India-Marxist, has stopped collecting data on religious conversions and it was proving to be advantageous to the “other side”.

In 2017, Mathew Mar Gregorios, the Bishop of the Syrian Independent Orthodox Church, told the media that ‘love jihad’ is a reality and the time has come for youngsters to stand up and fight it.

He said that a systematic campaign to convert Christian girls to Islam was going on in Kerala’s Malabar region.

The term “love jihad” came to existence in 2009 when the parents of four Christian girls filed habeas corpus petitions in the Kerala High Court after their children were converted to Islam.

The Kerala High Court had then ordered the Director-General of Police (DGP) to submit a report. The then DGP, Jacob Punnoose, told the Kerala High Court that religious conversions of Hindu and Christian girls married to Muslim men took place, but he wouldn’t term it as ‘love jihad’.

The LDF government, which was in power then, denied the existence of ‘love jihad’ and Punnoose, too, changed his stance.

In 2012, T P Senkumar, former DGP, submitted a report to the Kerala High Court on the existence of “love jihad”. But, the Oommen Chandy-led United Democratic Front, then in power, rejected it.

Get Swarajya in your inbox everyday. Subscribe here.
Tags:
758 Shares