Are Christian Women In Kerala ‘Love Jihad’ Targets For IS Terror Activities? 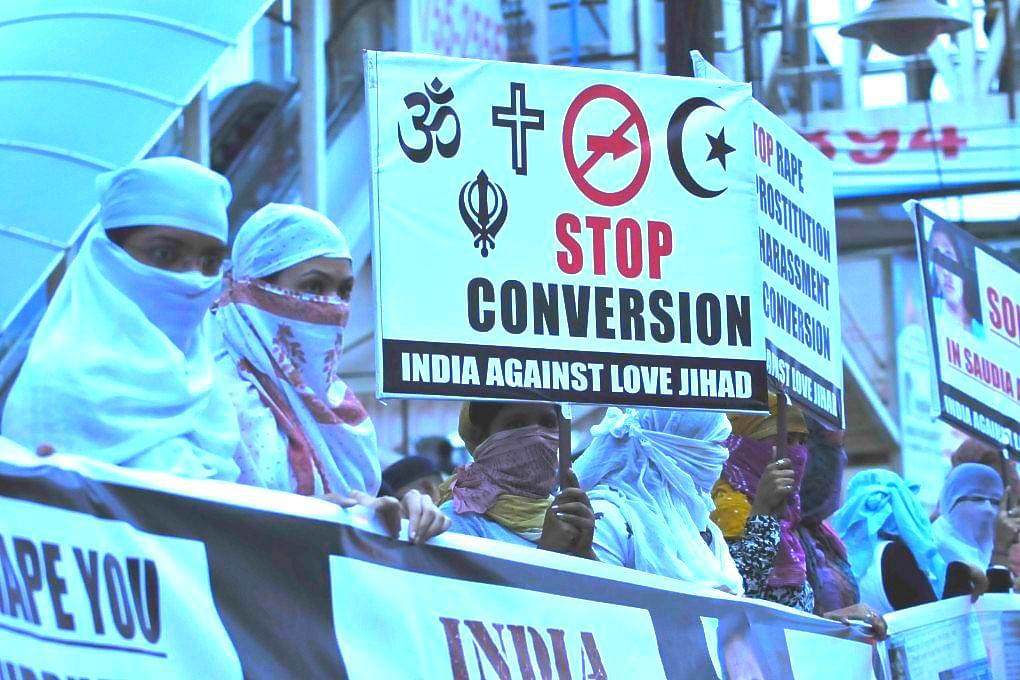 Women associated with India Against Love jihad hold placards and form a human chain to protest against love jihad and conversion to Islam. (Mujeeb Faruqui/Hindustan Times via GettyImages)

On Wednesday (25 September), Kerala police arrested a 19-year-old student in Kozhikode for allegedly raping an 18-year-old girl after drugging her. The incident took place at the city’s Sarovaram Biopark on 25 July.

The arrest of the student has led to a hue and cry being raised in Kerala for two reasons. One, the student belongs to the Muslim community, while the girl is a Christian. Two, the student and the girl had been in love and he had been compelling her to convert to Islam for some time.

The incident came to light only after the Vice-Chairman of the National Minorities Commission, George Kurian took it up with Union Home Minister Amit Shah. Kurian wrote to Shah demanding a probe by the National Investigation Agency (NIA) into conversions of Christian girls to Islam.

“The student, after committing the rape, attempted to kidnap the girl a few weeks ago. The police did not act despite complaints from her parents,” Kurian told Swarajya.

“The police arrested the student only after I took up the girl’s cause and wrote to the centre,” he said.

The Kozhikode rape incident has brought to limelight the controversy over ‘love jihad’ — a practice where allegedly Muslim men target non-Muslim women for conversion to Islam in the name of love. In most cases, Hindu women have been the target of this practice.

“I had received two complaints of Christians being converted to Islam. The Kozhikode complaint was the second one,” Kurian says, providing details of the first complaint to him.

The first complaint he received was from the parents of a woman in Delhi who disappeared all of a sudden.

“There was no hint that she had any love affair. When we got the complaint, she was boarding a flight to Abu Dhabi from Delhi. She is supposed to have landed in Abu Dhabi,” says Kurian, indicating that communication channels with her have been shut.

In his letter to Shah, the National Minorities Commission Vice-Chairman urged for laws to prevent the spate of religious conversions and use of these converts for terrorist activities.

Kurian said that religious conversions were being “organised” and the victims were trapped through ‘love jihad’. The case shows that the Christian community is a soft target for Islamic radicals to utilise them for their terrorist activities.

To illustrate his point, he says a study made by a Commission for Communal Harmony appointed by the Kerala Catholic Bishops Council revealed that some 2,600 Christian girls had been converted to Islam during 2006-2009.

Kurian says he doesn’t have the latest data but a woman had complained to him from Kozhikode that at least 47 Christian girls had been converted in that city alone in the last couple of years.

“The Kerala Government has stopped collecting data on religious conversions,” he said.

The ‘love jihad’ controversy was a live issue between 2009 and 2017 until the NIA submitted a report in the Supreme Court saying it did not find any basis for ‘love jihad’ allegations.

The conversion of Christian girls, in particular, to Islam had figured at a meeting that Shah, as the then BJP president, had with Christian representatives in Kochi and Thiruvananthapuram.

Then, Mathew Mar Gregorios, the Bishop of the Syrian Independent Orthodox Church, told a media outlet that ‘love jihad’ is a reality and the time has come for youngsters to stand up and fight it. He said that a systematic campaign to convert Christian girls to Islam was ongoing in Kerala’s Malabar region.

The term ‘love jihad’ came to existence in 2009 when the parents of four Christian girls filed habeas corpus petitions in the Kerala High Court after their children were converted to Islam. The parents had alleged that their girls had been kidnapped.

The Kerala High Court had then ordered the director-general of Police (DGP) to submit a report. The then DGP, Jacob Punnoose, had told the Kerala High Court that religious conversions of Hindu and Christian girls married to Muslim men were happening, but he wouldn’t term it as ‘love jihad’.

Kurian says that the Left Democratic Front (LDF) government, which was in power then, flatly denied the existence of ‘love jihad’ and Punnoose, too, changed his stance.

In 2012, T P Senkumar, the former DGP, submitted a report to the Kerala High Court that ‘love jihad’ existed. But, the then Oommen Chandy’s Congress-led United Democratic Front in Kerala had rejected the report.

According to those running a Christian helpline forum in Kerala to rescue girls of the community from conversions, there are advantages to converting Christian women than converting Hindu women.

For instance, the names of the Christian women need not be changed in their passport in the event of their conversion. These women converted from Christianity can be forced to enter European countries where they can be a security threat, says an executive of the helpline.

Kurian adds that a Christian woman in Ernakulam was arrested for her links with Thadiyantavide Nazeer, a terrorist. During investigations, the woman was found to have been converted to Islam.

Kurian and other organisations in Kerala fear that Christian women are being converted and forced into terror activities.

For example, Kurian says, five of the 21 people who had left Kerala to join the terrorist organisation Islamic State (IS) in Syria and Afghanistan were Christians.

“These women are being converted and sent to IS bases. After that they disappear,” laments Kurian, adding that he is getting support from the Christian clergy and community to stop such conversions.