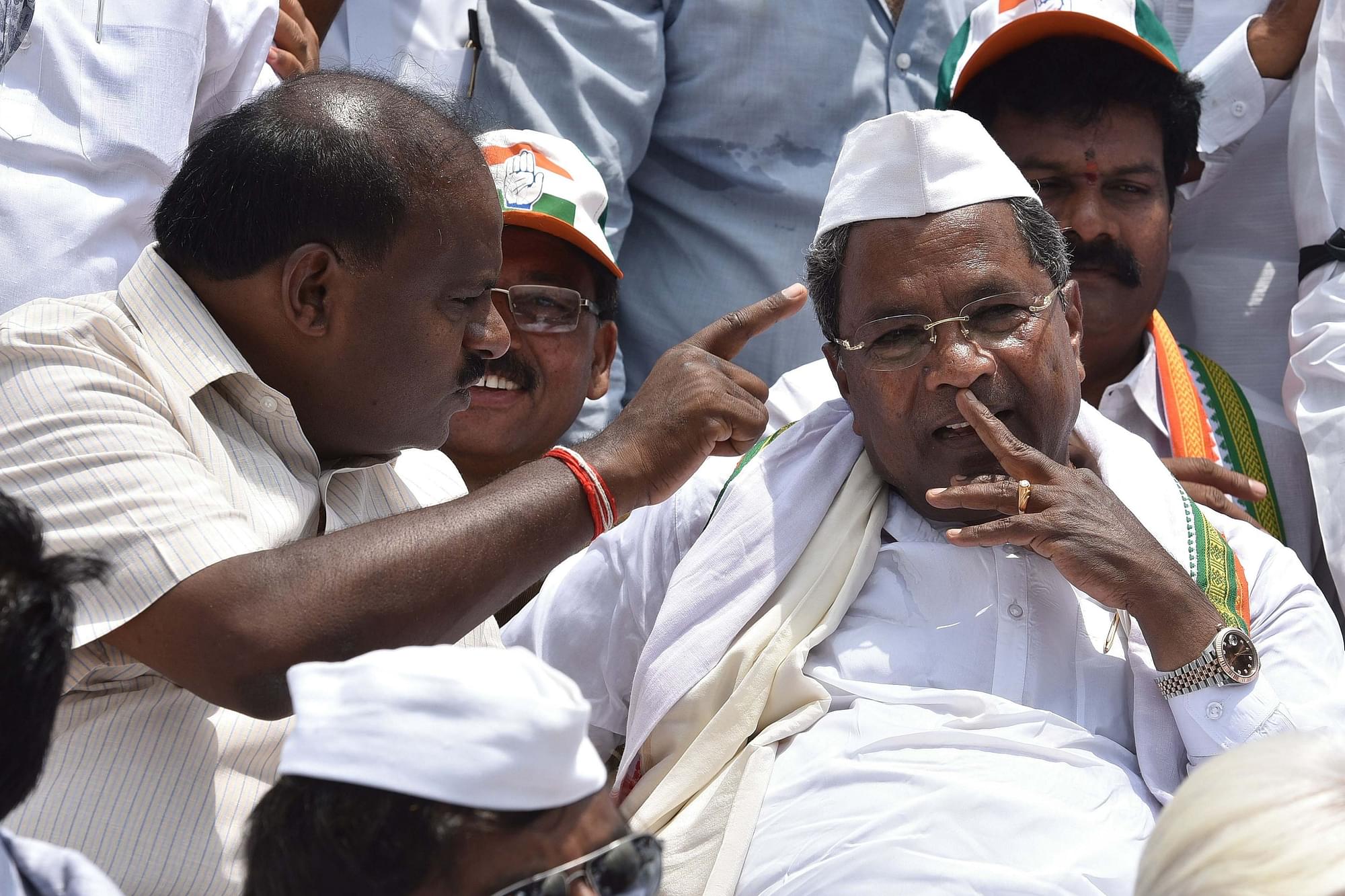 With the by-poll fever in Karnataka rising, the war of words among former coalition partners Janata Dal (Secular) (JD(S)) and the Congress is only getting fierce.

Former chief minister Siddaramaiah, who has been relentlessly launching attacks on the political opponents, has in a latest comment said that the JD(S) is no political party at all.

"JD(S) comes to power seated on other's shoulders. They are not those who can come to power on their own. In my opinion , it is not a political party at all," remarked the Congress Legislature Party (CLP) leader who had been expelled from this very party by party supremo HD Devegowda in 2005.

This was 13 years after he joined the Janata Dal in 1992 and was the General Secretary of the party and in subsequent two years went on to hold the finance portfolio in the Devegowda government in the state in 1994.

Mocking H D Kumaraswamy for shedding tears, he called it an act that has been on since the time of the senior Gowda patriarch. "Do not trust the JD(S) as they have made an internal pact with the BJP," warned Siddaramaiah at the meeting in which he inducted various former JD(S) members including Hanumantharayappa, who had quit the Congress on being denied a ticket last elections, into the Congress party.

Speculations are on that his daughter Kusuma Hanumantharayappa may be fielded from Rajarajeshwari Nagar constituency which falls under Congress' solo MP D K Suresh's Lok Sabha constituency of Bengaluru Rural. She is the widow of IAS officer D K Ravi who was found dead in a flat in Bengaluru during Siddaramaiah's reign as the CM of the state.

Ravi's mother has objected to Kusuma using her son Ravi's name to garner votes and said that she would "set publicity material on fire' if she did so, as reported.

The Congress is set to be awaiting the BJP's announcement of a candidate to declare its own. As the former MLA from RR Nagar, Muniratna Naidu, who defected to the BJP is one among the two top-runners for the seat along with Tulasi Munirajugowda.

The latter had lost the elections to the former on a BJP ticket while Muniratna was one among the 12 whose defection led to the fall of the JD(S)-Congress coalition in the state.

Speculations are rife regarding either of the two contesting on a JD(S) ticket depending on the BJP's choice of candidate.

The Sira assembly constituency goes to elections owing to the demise of the JD(S) MLA B Satyanarayana whose wife Ammajamma is being seen as a likely candidate from the party. This has led to fellow ticket aspirant from the JD(S), Kalkere Ravikumar joining the Congress in rebellion.

While victory in these elections may only add numbers to the BJP's strength in the state, for the Congress they are much more significant as they are the first since KPCC chief D K Shivakumar took charge as the head of the party in the state.