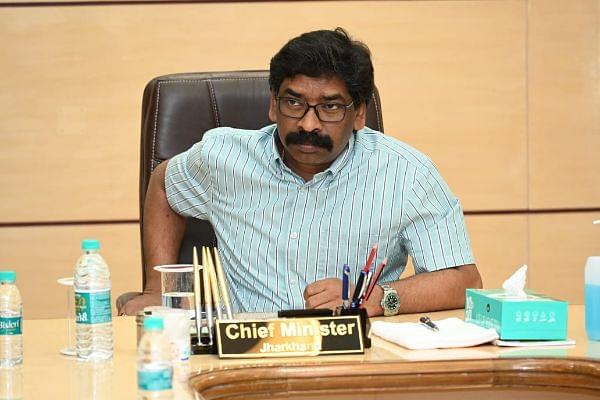 A storm of protests have broken out in Jharkhand over what the opposition BJP terms is a “discriminatory policy” approved by the Hemant Soren government Thursday on recruitment for government jobs.

The state cabinet has cleared a proposal that has dropped Hindi and Sanskrit from the list of main languages papers that candidates appearing for exams conducted by the Jharkhand Staff Selection Commission (JSCC) for Grade 3 and 4 government jobs have to clear. Urdu, however, has been retained in the list that has 12 regional languages, including tribal dialects.

Urdu has been retained as one of the languages in the 12 language papers while Hindi and Sanskrit which were there earlier have been dropped.

Jharkhand BJP spokesperson Pratul Shahdeo says that the new policy cleared by the state cabinet is discriminatory against Hindi and Sanskrit and is a bid to appease Muslims.

“Earlier, subjects like Hindi, Sanskrit and Urdu were also in the list of main language papers. But the new policy has kept Urdu but dropped Hindi and Sanskrit out of it. By the new policy, the government is discriminating against people living in certain regions of the state,” said Shahdeo.

The BJP spokesperson added: “In districts like Palamu and Garhwa, many people speak Bhojpuri. Similarly, a majority of people in the Godda and Sahebganj districts speak Angika. These languages have not been included in the list of regional languages, and Hindi could have been a common link. Residents of these districts would not be able to appear for the exams conducted for the Grade 3 and 4 posts now”.

The new recruitment policy that has replaced the earlier two-stage exams conducted by the JSCC with a single-stage test also makes it mandatory for candidates in the unreserved categories to have passed their class 10 and 12 exams from a school in Jharkhand.

This new rule, says the BJP, also discriminates against general category candidates since it has been made mandatory for them to pass their board exams from a school in Jharkhand while the same rule does not apply to reserved category candidates.

“This rule discriminates against moolvasis (original inhabitants of Jharkhand) who fall in the general category,” said Shahdeo. He said that the BJP is mulling options, including that of mounting a legal challenge, against the new policy.

JMM principal general secretary Supriyo Bhattacharya countered: “Everyone whose umbilical cord is attached to the state would benefit from this policy, which is historic. Till now, there were too many loopholes in the employment policy and people used to challenge it in courts”.

Bhattacharya pointed out that far from appeasing anyone, the new policy aims at assimilation. “Urdu was declared the second state language by the previous BJP government. As far as regional language is concerned, its importance lies in the fact that they act as a catalyst in governance as common people who interact with grade 3 and 4 category employees can express their problems properly in their mother tongue,” he added.

Jharkhand’s domicile criteria for recruitment to government jobs has always generated controversy ever since the state was carved out of Bihar in 2000. The previous BJP government had laid down 1985 as the base year to determine domicile status.

However, the JMM and the Congress opposed it and promised during the campaign for the Assembly polls in 2019 that they would change the base year. But the JMM-Congress-RJD alliance government has not notified any new base year even more than one-and-a-hald years after coming to power in the state.

The last BJP government had formulated a policy to reserve all grade 3 and 4 jobs in eleven tribal districts of the state only for locals from those respective districts. Though that move was hailed by the tribals and moolvasis, the High Court had struck it down as discriminatory.