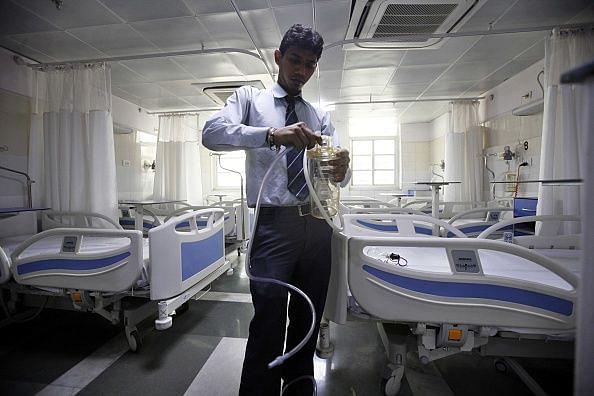 Amid the unprecedented second wave of Covid-19 and sudden spike in cases, Karnataka on Tuesday (11 May) warned to initiate legal action against all those hospitals that have failed to hand over beds to the government till date.

The revenue minister said that all hospitals within the Bengaluru Civic Body limits including those with 20-30 beds capacity and over 100 beds, must be inspected and 50 per cent of these beds must be seized immediately.

He added that all private hospitals in the city must be inspected immediately to make sure more beds are available for Covid patients.

Ashoka also instructed the officials to conduct a reality check on the availability of beds by a team led by officials and police officers at private hospitals and medical colleges.

According to the inspection and the regulations, the beds must be seized. In case the beds are not provided, the authorities must take legal action under the Disaster Management Act, he said.

Home Minister, Bommai Basavaraj Bommai said that this inspection must be a joint operation in order to seize all the beds in private hospitals in the city.

"Legal action must be taken against hospitals that are providing false information and not reserving the beds for Covid patients," he noted.

He also suggested that the number of step-down hospitals should also be increased in collaboration with private hospitals.

"At present step down hospitals have 960 beds, and there is a need to increase it to at least 5,000 beds in the days to come," he said.

Revenue department principal secretary N Manjunath Prasad said that already nine teams comprising IAS and IPS officers have been deployed to keep check on bed allocation in private hospitals. "Nodal officers and police officers are appointed to 50 major hospitals in the city. Apthamithra staff from Suvarna Arogya Suraksha Trust have also been appointed. These officers need to work in tandem to make sure private hospitals are reserving 50 per cent and private medical college hospitals are reserving 75 per cent for Covid patients is realised," he explained.