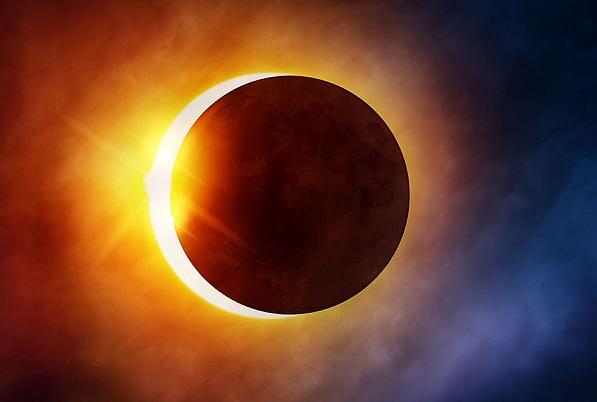 Star gazing enthusiasts in the southern part of the country are in for a treat as they will witness the annual ‘ring of fire’ solar eclipse tomorrow (26 December).

While parts of north India will be able to see a partial eclipse, certain areas in Karnataka, Tamil Nadu and Kerala will be able to witness from over 75 to 99 per cent visibility, with the sun being eclipsed by the moon in a way that it resembles a ‘ring of fire’.

The moon, when it crosses the sun during an annular eclipse, is farthest away from the earth and hence appears not large enough to completely overshadow the sun, thereby leaving a ‘ring of fire’ like frame of the sun visible.

And in Karnataka, most roads lead to the tiny village of Kutta in Kodagu district where the visibility is said to be 99-100 per cent, as it falls on the solar path.

Space enthusiasts from nearby states have begun making a beeline to this hamlet where the eclipse will be visible from 9-9.30 am. The total duration of the eclipse is said to be around three hours staring from 8 am.

A ground near a coffee plantation has been preparing for this special annual eclipse, as a sky-gazing event organised by the Mysore Science Foundation (MSF) will see a select 2,000 students among other enthusiasts descending at the coffee drying yard of K R Cariappa in Kaimaani.

The eclipse occurs through a narrow path from the Arabian peninsula to the pacific ocean through south India, Singapore and Indonesia, which is called the path of annularity.

And this year, the annularity hits landfall only once it reaches the west coast of South India, 20 km from Coimbatore to be precise. However, the eclipse will also be visible partially in other parts of the world.

The district Vijnana Parishat officers are said to be urging everyone to not miss this opportunity as an “eclipse with such accuracy cannot be witnessed in the near future after the one on December 26.”

The organisers have also sought to make a record of sorts in the India book of records as it will be the ‘largest gathering of children in one place to view annular solar eclipse’.

This is sure a better way to introduce young minds to space concepts than rote learning, as has been the rule of the day. While legendary Sanskrit scholars and texts have had better and more simple and elegant explanations of such phenomena, those have not found their way to school textbooks, with thinkers dismissed off as being ‘orthodox’.

Read this piece to know The Workings Of The Eclipses, Explained By Varahamihira, The Polymath