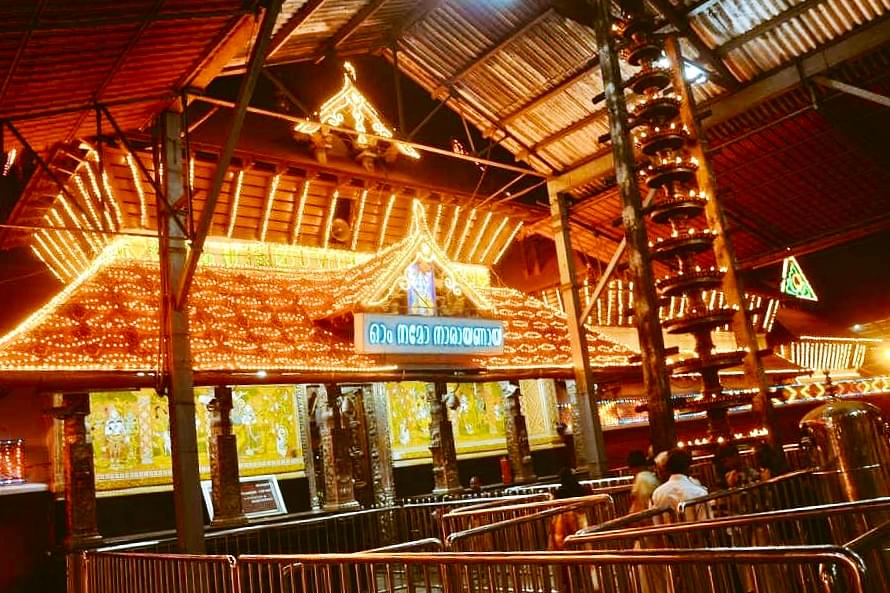 The Kerala High Court has struck down the decision of the Guruvayur Devaswom Board, which administers the famous Lord Sree Krishna Temple in Guruvayur, to contribute to the Kerala Chief Minister’s Distress Relief Fund for floods and the novel coronavirus (Covid-19) pandemic.

A three-member bench of the High Court, comprising Justices A Hariprasad, Anu Sivarakan and MR Anitha, ruled that the managing committee of the Guruvayur Devaswom Board has no authority to contribute for the Chief Minister’s Relief Fund or to any other government agency.

Temple funds are meant for the development of the religious place and its allied services and it was not valid on the part of the Devaswom Board to divert it for other purposes, the court said, asking the State government to return the sum of Rs 10 crore 'donated'.

The order upholds a single judge ruling of the High Court asking the Pinarayi Vijayan-led government to return the money. However, the Left Democratic Front (LDF) approached a division bench which has now upheld the verdict.

The judgement overturns a ruling last year upholding the Devaswom’s contribution of Rs 5 crore for flood relief in the State.

It also strengthens another ruling of the court that said the Devaswom Board was not authorised to make such contributions under Section 27, regardless of the purpose it was meant for.

N Nagesh, a devotee, had approached the court saying that the presiding deity was the sole proprietor of the temple fund and the board has no right to divert the shrine's funds.

Besides, various others had also petitioned the High Court against the diversion of temple funds, including another Rs 5 crore for Covid-19 Relief Fund.

The temple board had contributed Rs 5 crore initially to the CM’s Relief Fund after two consecutive floods in the State in 2018 and 2019.

On 9 May, Swarajya had reported that the Guruvayur Devaswom Board's decision to contribute for the Chief Minister Relief Fund may not stand legal scrutiny on two grounds (Read here).

In this ruling, the three judges derived their judgement from the interpretation of Sections 21 and 27 of the Guruvayur Devaswom Act, 1978.

Last year, a two-judge bench had upheld the Devaswom Board’s donation to the Chief Minister's Relief Fund, saying the heading in Section 27 of the Guruvayur Devaswom Act referring to “certain’ allowed the contribution.

The three-judge bench, in its ruling last weekend, said the Devaswom Board was a trustee of the deity under the Act and it was bound by the rules framed for its functioning.

Section 27 of the Guruvayur Devaswom Act, 1978, empowers the Devaswom Board to incur expenditure for “certain purposes'’ such as maintenance, management, administration of the temple, grant or contributions to homes for the poor.

It also allows expenses for the benefit of persons belonging to the Hindu community, construction of buildings connected with the affairs of the devaswom, measures to promote Sanskrit and Malayalam language and contributions to any religious institution.

The case was earlier referred to the three-judge bench after a two-judge bench of Justices Shaji P Chaly and MR Anitha differed on their views with regard to the Board’s donation.

They said the donation to the Chief Minister’s Relief Fund would be subject to the outcome of the cases on “diversion of temple funds for non-religious purposes”.

It tried to strengthen its case by saying that the ‘worshippers and pilgrims’ were scattered across the State and its donation would help them.

In May this year, Guruvayur Devaswom Chairman K B Mohandas handed over Rs 5 crore to Thrissur district collector S Shanavas, saying the contribution was part of the Devaswom’s 'social responsibility'.

Mohandas said there was nothing unlawful about it as the Devaswom board had earlier donated to the Chief Minister’s Relief Fund during the floods in 2018.

He said the donation had been made after getting the permission of the Devaswom Commissioner. The contribution has been made from the interest the Devaswom got for its fixed deposits with banks.

The High Court ruling now should put at rest doubts over utilising temple funds, though the LDF Government could now file an appeal in the Supreme Court.