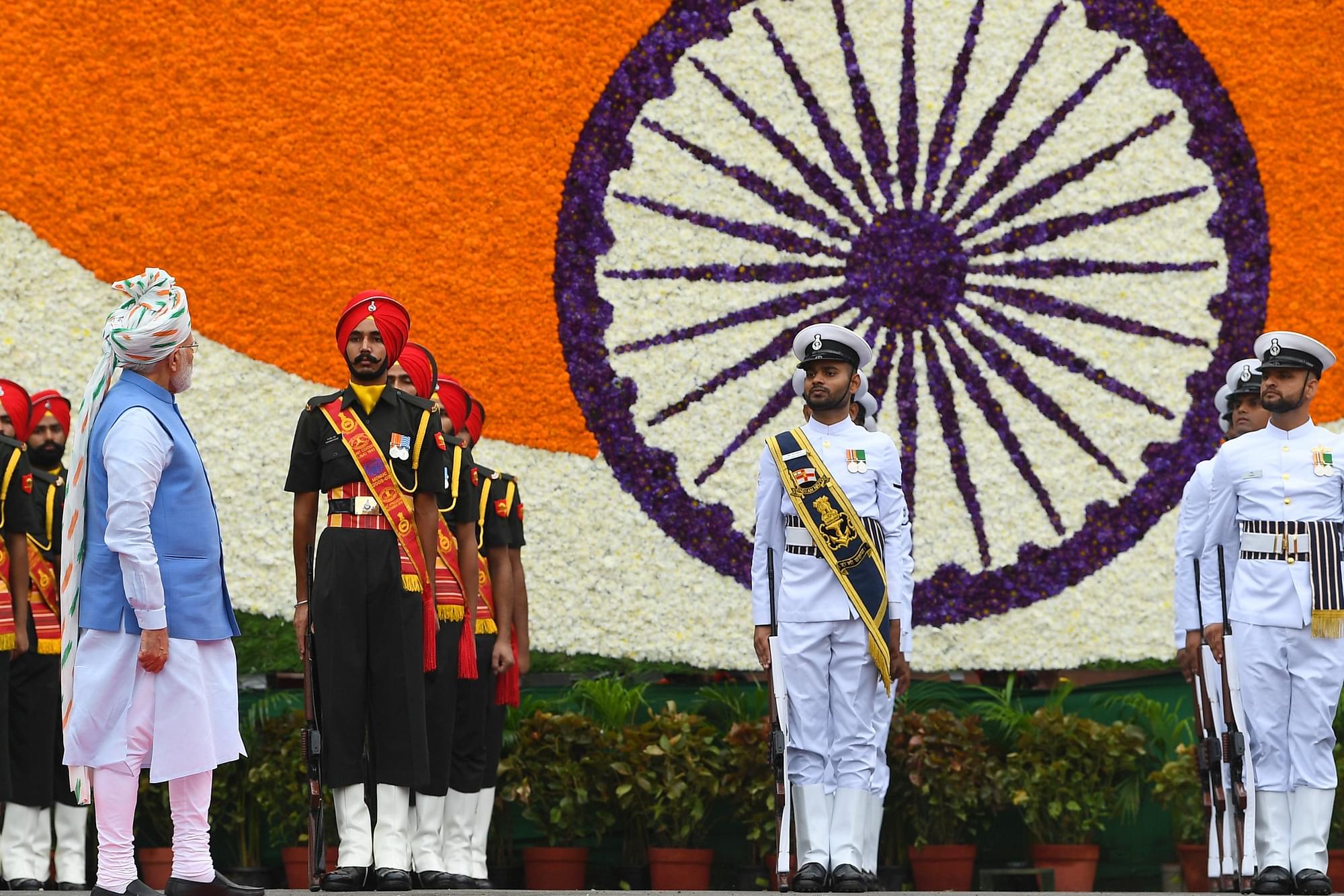 Prime Minister Narendra Modi addressed the nation from the ramparts of the Red Fort on the occasion of 76th Independence Day. Here is what he said:

He recalled the contribution of Mahatma Gandhi, Bhagat Singh, Rajguru, Ramprasad Bismil, Rani Lakshmi Bai, Subash Chandra Bose, and all other freedom fighters who shook the foundations of the British Empire. He also invoked tribal freedom fighters such as Birsa Munda, Tirot Singh and Alluri Sitarama Raju, who played a pivotal role in keeping the freedom struggle alive in every corner of India.

Do Away With Colonial Hangover

Prime Minister Modi urged the people of India to discard the mindset of ‘Ghulami’ that makes us seek certificates from foreign powers. He said that India is capable enough to put in place its own measuring parameters based on its civilisational heritage.

He said that through the New Education Policy, an attempt has been made to liberate our young generation from the vestiges of a colonial past. By emphasising learning in the mother tongue, the language barrier that might restrict talent has been removed.

Five Resolutions For The Next 25 Years

The Prime Minister urged people to focus their energies on the five resolutions of making India a developed nation, removing every trace of the colonial mindset, taking pride in its heritage, fostering unity, and fulfilling their duties in the next 25 years.

Modi said India will have to move ahead with big goals to fulfil the vision of a developed India. The world looked at India with pride and hope, and as a problem-solver.

Prime Minister Modi also lauded citizens of the country for coming together in the fight against COVID-19, and said India has administered a record 200 crore vaccine doses in a time-bound manner, a feat that would not have been possible for another nation.

There was an increase in ‘jan chetna’ or collective spirit.

"The fight against COVID-19 was an example of this ‘jan chetna’ where citizens came together. From supporting doctors to propelling research to taking vaccines to the remotest parts, we stood together. The country's citizens stood with corona warriors and showed their support by banging thalis and lighting diyas," he said.

Lauding citizens for leading the way in taking vaccines, he added: "When there was confusion prevailing in the world over the efficacy of vaccines, my country's people came forward and we accomplished the feat of administering 200 crore vaccine doses. That surprised the world."

The Prime Minister also stressed the fact that the country broke previous records in the administration of vaccine doses.

He added that the 'Har Ghar Tiranga' campaign has been another example of nation's collective spirit.

Prime Minister Modi underlined the importance of eliminating a culture of demeaning women through words or deeds. He said that gender equality is the key to a united India.

"For the nation to achieve a bigger target, that too, at a much faster pace, it is crucial that we empower women around us in every sphere. It is only with their equal participation that India could forge ahead on the path of development." Acknowledging the contribution of women, in every field, he said that there is hardly any sector left, where India’s women are not making their mark.

Talking about building a self-reliant India, Prime Minister Modi said that for how long we would depend on the outside world to meet our needs? He said that Aatmanirbhar Bharat is not a government scheme. It is a mass movement.

He said that for the first time in 75 years, a made-in-India gun was used for the ceremonial 21-shot salute to the tricolour at the historic Red Fort on Independence Day.

In his speech, Prime Minister Modi commended the armed forces personnel for adopting his vision of Atmanirbhar Bharat (self-reliant India) and taking steps towards realising it.

While referring to the Defence Ministry's decision to issue multiple 'positive indigenisation lists', the Prime Minister lauded Indian soldiers for taking the resolve of not importing 300 items, that they listed to source indigenously.

He recalled how children between the age of five and seven years have been telling their parents that they do not want toys made outside India.

Fight Against Corruption And Nepotism

Prime Minister Modi said the two big challenges before the country are corruption and nepotism, asserting that the nation has to fight against these together.

Talking about corruption, he said the nation shows anger towards corruption, but not the corrupt. Until and unless people have the mentality of penalising the corrupt, the nation cannot progress at an optimum pace, he said.

On nepotism, the Prime Minister said that it has infiltrated all the institutions of the country, harmed real talent and led to more corruption. “We need to give opportunities to those who are talented and will work for the progress of the nation. Talent will be the basis of New India,” he said.

Prime Minister Modi said that the government has opened up new opportunities for the youth in sectors such as space, deep ocean and so on. Through the PLI (production-linked incentive) scheme, it has dedicated Rs 1 lakh crore to make India a hub of manufacturing, bring new technology in the country and create more and more employment opportunities.

Hailing UPI (unified payment interface), he lauded the revolution India has brought about in the fin-tech sector at the back of its technological prowess. He added that digital is the way forward, and to ensure that India becomes digital, his government is ensuring optical fibre network reaches every village in the country.

Showing the road ahead, Prime Minister Modi emphasised that India needs to become self-reliant in new-age technologies, including solar power, wind power, mission hydrogen, biofuel, electric vehicle and so on.

He hailed the young entrepreneurs emerging from tier-2 and tier-3 cities and changing the startup landscape with their innovation.

Also Read: India@75: Seven Non-Economic Reforms We Must Push For In Amrit Kaal