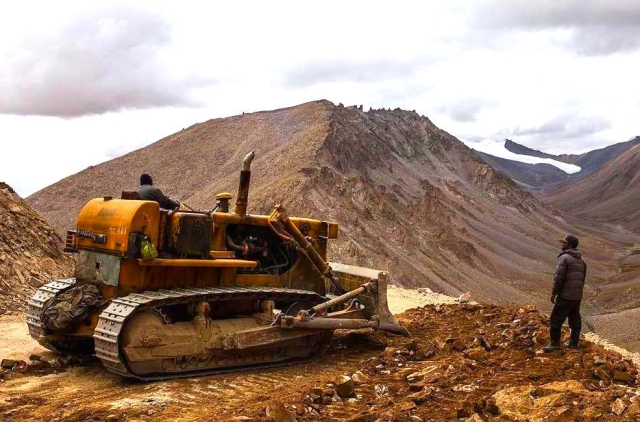 Even as the Army prepares for large-scale deployment in eastern Ladakh during the winter season, work on border roads in the region continues at full pace.

Renovation work on the Durbuk-Shyok-Daulat Beg Oldie (DS-DBO) road, which is critical for connectivity to north-eastern Ladakh — called sub-sector north by the Army, is likely to be complete by the end of October.

“The black topping of the DBO road will be completed by the end of this month,” a report in India Today quotes Lieutenant General Harpal Singh, Director General of the Border Roads Organisation (BRO), the agency responsible for the construction and maintenance of roads along India’s borders, as saying.

In 2011, when the DS-DBO road was under construction, it was found that it had been laid on flat terrain along the bed of the Shyok River instead of being built on the mountain side. Every year, as melting snow flooded the Shyok river during the summer months, some portions of the road were damaged.

The road remained closed for up to 94 days due to the rise in water level in the Shyok River. This left it unfit for military use. A large part of it, around three quarters by some accounts, was realigned by the BRO.

The criticality of the DS-DBO road can be understood from the fact that the Galwan Valley and the Depsang Plains, two of the five areas along the Line of Actual Control in eastern Ladakh where India and China are currently locked in a standoff, lie on this road. The road provides access to far-flung areas abutting the 38,000 square km territory of Aksai Chin under Chinese occupation.

“Other than DBO road, projects in Demchok and Kargil are also underway,” the Director General of BRO said, adding that the agency is working on many more projects in the eastern and western parts of the Union Territory of Ladakh.

The officer, addressing the media after the inauguration of the Atal Tunnel at Rohtang by Prime Minister Narendra Modi yesterday (3 October), said the target is to ensure all- weather road connectivity to Ladakh in three years.

The 9-km-long Atal Tunnel, built at an elevation of over 10,000 feet, will provide year-round connectivity to Ladakh and cut down the travel time for the Indian Army. It will also ease travel for civilians in the Lahaul-Spiti area, which would otherwise remain cutoff for five months due to heavy snow.

"Tunnels bypass a treacherous route. This helps not just the military but more importantly civilians. It helps tourism, economy and integrates border areas to the mainland. As a result it's also of strategic use," Lt Gen Singh said.

With work on Atal Tunnel complete, the BRO is shifting focus towards the 13.5-km-long tunnel planned at the Shinku La pass on the Nimmu-Darcha-Padam road. The National Highways and Infrastructure Development Corporation Limited is currently working on a detailed project report for the tunnel.

The Ministry of Defence is planning to expedite work on more tunnels in border areas to make the movement of troops and equipment easier. These include the tunnels at Tanglang Pass, Lachung Pass and Baralacha Pass.