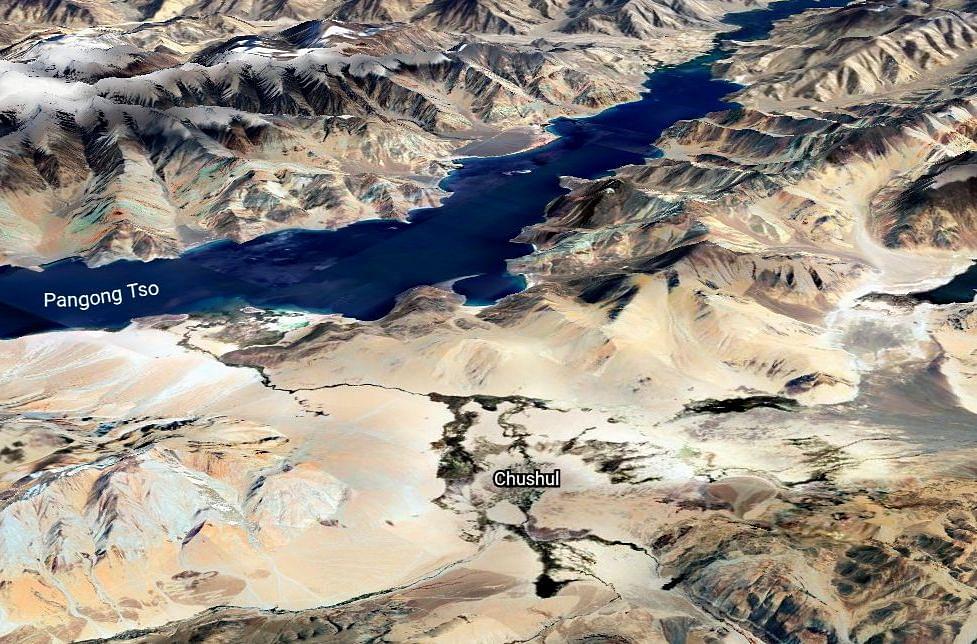 Since then, a visibly irritated China has sharpened its rhetoric and is trying to dislodge Indian troops from these heights, which give the Indian Army a dominating position around the Spanggur Lake and the Spanggur Gap.

One such Chinese attempt yesterday (8 September) ended in firing at the Line of Actual Control (LAC) for the first time in nearly 45 years. While the Chinese have accused the Indian Army of firing “warning shots”, India has rubbished these claims and said that the Chinese troops had fired after being stopped from moving forward towards Indian positions.

The image below, posted on Twitter by satellite imagery expert @detresfa_, shows Indian camps on heights near Rechin La. These camps, the expert notes in the annotations, are located at an elevation of nearly “5,000 metres.”

Tents and posts of the People’s Liberation Army (PLA), located some distance away but in the line of sight of Indian troops, are at an elevation of “4,000 metres”.

It is around Rechin La that Indian and Chinese troops are locked in a standoff, with the PLA trying to dislodge Indian troops from the heights.

On Tuesday (8 September), over a week after India took control of these heights, talks between the two countries on resolving the issue took a sour turn.

This report in India Today says that the military commanders from both sides “decided against holding in-person talks”.

“..officers from both sides exchanged heated arguments over the hotline” over China’s attempts to dislodge Indian troops, the report says.

“During the talks over the hotline, the Indian brigadier accused China of setting up semi-permanent stone defences and escalating tensions by attempting to create such positions,” the India Today report adds.

The two sides, however, agreed to keep the communication channel open.

These developments come just days after Defence Minister Rajnath Singh met his Chinese counterpart in Moscow on the sidelines of a Shanghai Cooperation Organisation (SCO) meeting. Reports said a breakthrough was not reached during the meeting between the two ministers, which lasted for over two hours.

External Affairs Minister S Jaishankar, who reached Moscow today (9 September) on a four-day visit to attend a meeting of the foreign ministers of the SCO is also likely to meet his Chinese counterpart Wang Yi on the sidelines of the event.

Fresh tensions between the two countries ahead of the crucial meeting are clouding chances of a significant breakthrough on the issue.

Talking on the issue during the release of his book The India Way before leaving for Moscow, Jaishankar had said that the two countries need “very deep conversations... at a political level” to resolve the current crisis.

At another event, the Foreign Minister had noted that the relationship between India and China in other areas can’t remain unaffected by the crisis at the border.