Life In Delhi Metro: In Lockdown 4.0 No Beeps, No Frisking at Security Checks, Regulated Entry And More 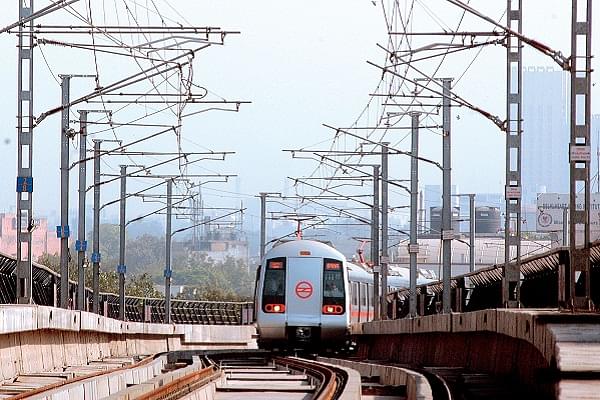 With indications coming that the Delhi Metro will start in lockdown 4.0 beginning from Monday (18 May), the CISF is already equipped with providing security cover to the public transport facility premises, but this time with a new set of measures that include "no beep at DFMD, no frisking" method.

It will be the first time in the Delhi Metro when passengers will not have to go through physical frisking by the security personnel of the Central Industrial Security Force (CISF) -- whose over 12,500 personnel, including women, currently guard the Metro in round-the-clock eight-hour shifts. The CISF has been guarding the Delhi Metro since 15 April 2007.

The new method will be followed among other mandatory norms by all CISF personnel deputed near X-Ray baggage scanner machine gates from where passengers get entry inside stations.

As physical frisking will not be there, it does not mean that security is being compromised. This is to maintain social distancing between the CISF personnel and the passengers only to contain the spread of novel coronavirus or COVID-19 disease which till Sunday has affected 116 personnel of the paramilitary force

As a total of 29 CISF personnel deputed in the Delhi Metro Rail Corporation (DMRC) have been found COVID-19 positive till Sunday, "no physical frisking" move of the force is only to maintain distancing from passengers. It will protect both passengers as well as the on duty CISF personnel.

Explaining "No beep at DFMD (Door Frame Metal Detector), no frisking" move, a senior CISF official, requesting anonymity, told IANS that "it does not mean that security will be compromised".

"If beep sound comes when a passenger crosses through the DFMD door, he or she will be stopped and they will be asked to take out the metal carried by them. If the DFMD door does not make a beep sound, the passenger will be allowed to proceed without frisking which used to be done earlier," the official said.

The official, however, maintained there will be more changes in the norms soon after the new guidelines of lockdown 4.0 are announced.

Stopped since March 22, Delhi Metro's 248 stations are guarded by the CISF and the force is also responsible for provide security to the passengers on the 345 km network in what is the safest mode of transport which used to ferry around 32 lakh people per day before the lockdown.

Among the other precautions checked by the CISF would be the Aarogya Setu app in the mobile phone of every passenger, wearing masks and maintaining social distancing.

The crowds at the Metro stations will also be checked by the CISF personnel and people will not be allowed to enter if there are enough people already inside the station.

If needed, the entry gates will be closed, the official said.

The official added that thermal screening of all passengers will be done and those having flu-like symptoms will be barred from entering.

A dedicated CISF team will intermittently check the seating arrangements to ensure that passengers sit on alternate seats. The force will also allow only limited people to stand inside the trains, the official said.

Hand sanitisers will be arranged at the entry and exit points of each station to avoid virus spread and the guards on direct contact duty will be wearing face masks and hand gloves.

Quick Reaction Teams of the CISF will be provided Personnel Protective Equipment (PPE) kits so as to maintain security as well as provide help to passengers in need.

Though a decision has not been taken by the Centre on when Metro services will resume as the third phase of the nationwide lockdown ends on Sunday, the CISF is prepared with detailed norms when Metro rides will be given the nod.