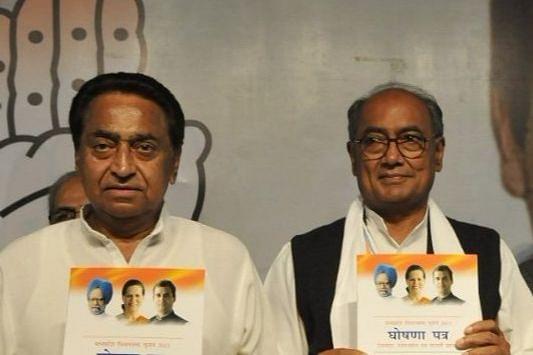 According to this report, two Congress leaders headed a ‘rescue’ operation. The report adds that senior Congress leader Digvijaya Singh said that four MLAs were ‘still inside’.

Earlier, Digvijaya Singh had said that the Bharatiya Janata Party had been trying to bribe MLAs of the Congress to destabilise the Kamal Nath government.

According to this report, Singh said that former Madhya Pradesh chief minister Shivraj Singh Chouhan and senior BJP leader Narottam Mishra have been making efforts to ‘lure’ legislators from the Congress by offering them ‘Rs 25-35 crore’.

Singh was quoted as saying: “I want to warn the BJP that this (Madhya Pradesh) is not Karnataka. Not a single Congress MLA from Madhya Pradesh is for sale.”

The report adds that Singh said that Chouhan and Mishra had a dispute over ‘who will become the chief minister’ but both have agreed upon the choice and on who would take the post of deputy CM.

Singh said that both have been approaching the Congress MLAs to ‘fulfil their dreams’.

Taking to Twitter, Singh said the BJP has begun the process of ‘taking’ the MLAs of Madhya Pradesh Congress and Bahujan Samajwadi Party (BSP).

In the same update, he asked if the MLA from BSP (Mrs) Rambai was not taken by former BJP minister Bhupendra Singh to Delhi on a chartered flight. He asked if ‘Shivraj ji’ (Chouhan) would like to say anything.

Chouhan, the report adds, attacked Singh and indicated that there was strife in the Congress. The report quotes him as saying: “Digvijaya Singh specialises in spreading lies. They have to justify their presence (within the party), threaten and bully someone.”

Leader of Opposition Gopal Bhargava said that Singh was ‘trying to pressurise the Congress leadership for Rajya Sabha membership.’

The state assembly has 228 members presently; two seats were vacated after the death of the respective legislators.

The Congress has a strength of 114 and BJP 107. Of the remaining nine seats, two are with the BSP while the SP has one MLA in the Assembly. There are four independents.

While the Congress has charged the BJP with horse trading, this report quotes CM Kamal Nath as saying: “As MLAs are telling me about money offers, I am telling them ‘phokat me mil raha hai, toh le lena’ (accept the offer if given for free).”

He added that there was no need for the Congress to worry.