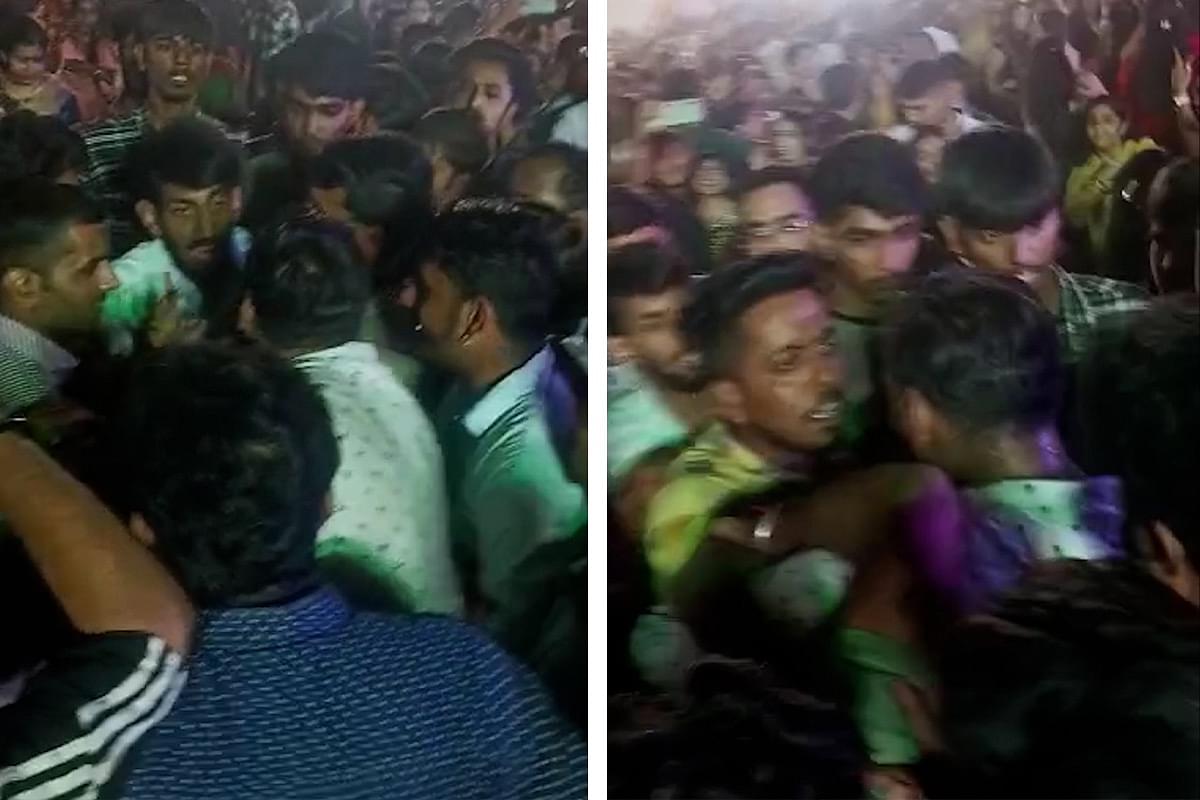 Screengrabs from the video showing the scuffle between two groups.

With Dussehra, concluded the nine-day Hindu festival of Navratri.

The Garba celebrations this year have courted controversy due to prohibition on the entry of single Muslim men at events in various states including Madhya Pradesh, Rajasthan and Gujarat.

At some venues, police arrested such men for allegedly trying to enter after hiding their religious identity, after organisers accused the men of ‘love jihad’.

In Rajasthan’s Bikaner district, a gory incident has come to light. A Hindu man has been stabbed by some Muslim men and he is fighting for life at a hospital. As per the victim’s family, he had objected to the group molesting women during a Dandiya event.

As per reports, the Dandiya event was organised in Kotgate area of Bikaner district in Rajasthan on 1 October.

A group of men, namely Zubair, Sameer and Shahrukh, along with their friends, were molesting women participants when Madhusudan got into an argument with them.

The organisers dragged out the men from the event. They, however, brought a mob and assembled outside the event gate. When Madhusudan went out after some time, they attacked him and stabbed him in his stomach.

On 5 October, the victim’s father, Dinesh Modi, told Times Now, “Those boys were harassing girls. When Madhusudan protested, they dared him to meet them at the gate. I want to ask - what were they doing in our festival? Who allowed them to enter? Only one accused has been arrested while others are still absconding. Strict action should be taken against all of them.”

Madhusudan was immediately taken to PBM Hospital in Bikaner, where he continues to battle for his life in the ICU.

His father told the media that his wounds were grave, his intestine had sustained deep cuts and he had undergone several surgeries.

As per police, the victim’s family has named five suspects in the case so far, and they are still investigating to find the motive behind this attack.

A report by News18, quoting the statement of the victim’s father given to the police, says, “On 1 October, around 10.30 at night, a friend of Madhusudan named Kishan Bhati called him.

"Kishan, Madhusudan and a third friend, Ajay Ojha, went to play Dandiya at the railway ground in Kotgate area. There, some boys were harassing girls. When Madhusudan tried to stop them, they all got into an argument. The molesters threatened to kill him.”

The Kotgate SHO, Rajendra Singh, told the media that as per preliminary investigation, Madhusudan, who lives near Hariram temple, was present at the India Dandiya Festival with his friends. Sameer, Zubair, Shahrukh and five-six other men were passing comments and harassing the girls dancing there.

Madhusudan tried to stop them. When attackers were dragged out of the event by organisers, they threatened to kill him.

When the event concluded and Madhusudan went out, the men were waiting for him at the gate of the pandal. They were many in numbers.

They attacked him with sharp weapons, along with sticks and sickles. Some of them held Madhusudan while one of the men stabbed him on the right side of his stomach.

The police have so far arrested Sameer Nadsa while others are absconding.