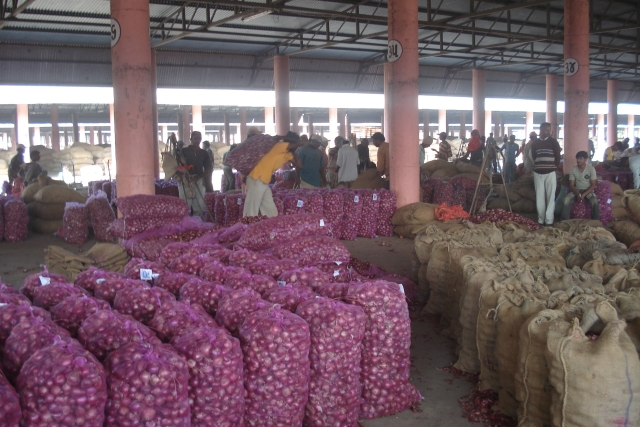 Today (22 October), onion modal prices or rates at which most trades took place in Lasalgoan Agricultural Produce Marketing Committee (APMC) yard were ruling at Rs 62 a kg against Rs 58 yesterday.

Stating that the retail price of onion had increased markedly since August, the PIB statement said that onion prices had surged in the last 10 days by Rs 11.56 a kg, taking the all-India retail price to Rs 51.95 a kg.

This is over 12 per cent higher than the same time last year. While the Centre banned onion exports on 14 September to check surging prices, it has come up with further measures to keep the rates under check.

One of the measures taken is to release buffer stocks of rabi onion it had built. According to the Government, it had over 80,000 tonnes of onion as buffer stocks.

These stocks have been released in a calibrated way since September to various markets, Government-owned and cooperative agencies such as Safal, Kendriya Bhandar and National Cooperative Consumers Federation.

More stocks will be release in the coming days. On the other hand, the Centre has also allowed imports of onion and relaxed conditions for fumigation and additional declaration on phytosanitary certificate under the Plant Quarantine Order, 2003.

Agricultural consignments coming into India have to be fumigated mandatorily to ensure foreign pests and inspects are eliminated and not allowed to enter the country.

Imports will now be allowed until 15 December, a fair indication of how prices could rule high till then, while fumigation of imported onions can now be done at the port on arrival by an accredited agency.

If Stem and Bulbs nematode (Ditylenchus Dipsaci) or onion maggot (Hylimia antiqua) is detected in the onion consignments, it would be eliminated through fumigation and the consignments to be released with no additional inspection fee.

Indian High Commissions abroad are in touch with traders in countries such as Egypt to send onions to India. Other measures to rein in the prices are also being taken.

An early kharif onion crop of 3.7 million tonnes will begin arriving in the markets and it could ease the prices, the statement added.

The rise in onion prices should be a cause for concern for Prime Minister Narendra Modi and the Bharatiya Janata Party besides the National Democratic Alliance since elections to Bihar Assembly are due shortly.