Moradabad: 17, Including Seven Women, Arrested For Pelting Stones On Health Workers, Sent To Judicial Custody After 3 AM Hearing 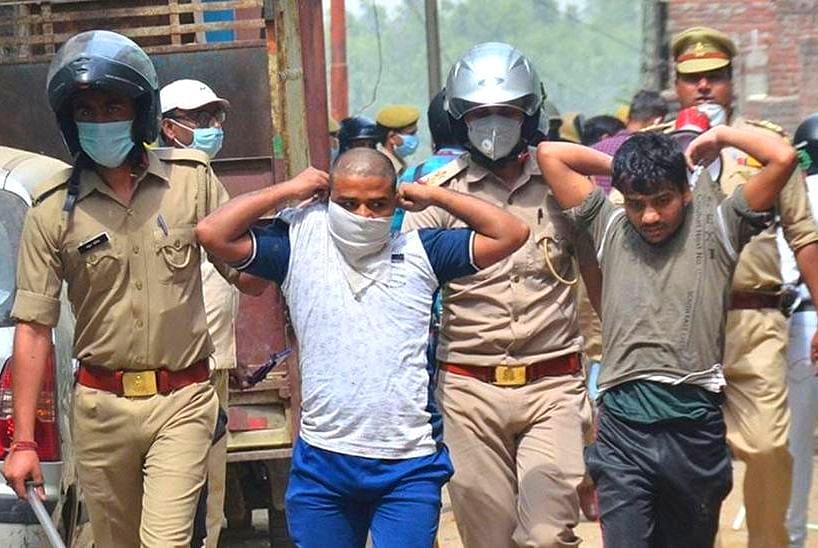 A day after the incident of violence and stone pelting against frontline workers fighting the spread of Covid-19 in Moradabad's Nawabpura, 17 people from the area have been put behind bars.

The health workers and policemen were attacked when they were carrying out their duties towards quarantining the family members of a man who died of coronavirus.

Uttar Pradesh Chief Minister Yogi Adityanath had directed strict action against those involved and had announced the slapping of National Security Act (NSA) on those who are found hindering the work of Covid-19 frontline fighters.

Amar Ujala has reported that the 17 people who pelted stones on Covid-19 frontline warriors in Moradabad have been sent to a 14-day judicial custody after a hearing was arranged for the matter at 3 am today (17 April). All these 17 people were behind bars by 5.15 am. Among the 17 who have been jailed seven are women.

Police and administration were working tirelessly over the matter. These 17 people were arrested by the police from the area.

The hearing took place at the residence of the remand magistrate. The step was taken looking at the seriousness of the matter.

All 17 people have been quarantined in the jail. Considering they are all from the same emerging hotspot, where a patient has died of the virus. They have been kept separately in the jail.

The report mentions that the police worked with caution as all the accused were at the Nagphani thana. The police did not want to see matters becoming worse in the possibility of a crowd turning up at the thana.

Eyes are now on 40 more people from the locality. Police say that they have identified these people with the help of "CCTV footage, photographs and videos of the incident".

This Indian Express report has quoted Moradabad Additional Superintendent of Police Amit Kumar Anand as saying: “we are identifying the people who were present there and involved in the attack. Teams have been formed to arrest them. We have identified more than 40 people."

Amar Ujala mentions that the police have found some vital clues on the 'mastermind' of the stone pelting and violence against the Covid 19 warriors.

Currently, only women are present in the houses in the area where the stone pelting took place. The Amar Ujala report adds that many men have walked towards the rural area for the fear of police and are hiding there. The police have said that after the 'mastermind' is held, NSA will be slapped on all these people.