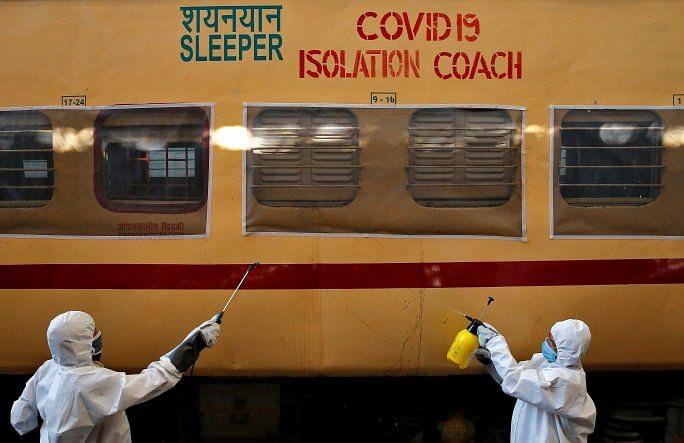 Strengthening the capabilities of the nation in the united fight against Covid, the Railways has, amongst its multi-pronged initiatives, deployed nearly 4,000 Isolation Coaches with almost 64,000 beds.

The Railways has mobilised additional Covid Care Coaches for use in Madhya Pradesh and Maharashtra.

Keeping up the momentum on the oxygen front, 14 Oxygen Expresses have already completed their journey and five more loaded Oxygen Express are running, carrying 342 MT of LMO in 18 tankers.

It is Indian Railways' endeavour to deliver as much LMO as possible in the shortest time possible to the requesting states.

While Delhi will receive its 120 MT of LMO in 6 tankers from Durgapur in the next 24 hors, Haryana received its first and second Oxygen Express on Saturday carrying 79 MT of LMO in five tankers.

Third Oxygen Express carrying 30.6 MT LMO in two tankers has already started from Angul and is currently on its way to Haryana.

Madhya Pradesh received its second Oxygen Express carrying 70.77 MT of LMO to Jabalpur and Sagar from Bokaro on Friday.

Uttar Pradesh has received approximately 355 MT LMO so far and more is on its way to Lucknow.

The Railways has also positioned 50 coaches at major cities of Uttar Pradesh like Faizabad, Bhadohi, Varanasi, Bareli and Nazibabad.

The updated position of the utility of these coaches positioned in the States of Delhi, UP MP and Maharashtra are as follows -

At Nandurbar (Maharashtra), in the last two days, 6 new admissions were registered as on date while 10 patients were discharged after the isolation period.

43 Covid patients are currently utilising the facility. Cumulatively up to now, 92 admissions were registered with 57 subsequent discharge of patients by State Health Authorities. 314 beds are still available.

In Delhi, the Railways has catered to the full demand of the State government for 75 Covid Care coaches with a capacity of 1,200 beds.

Fifty coaches are positioned at Shakurbasti and 25 Coaches at Anand Vihar stations. Four admissions were registered as on date with 1 patient discharged and 1,196 beds still available.