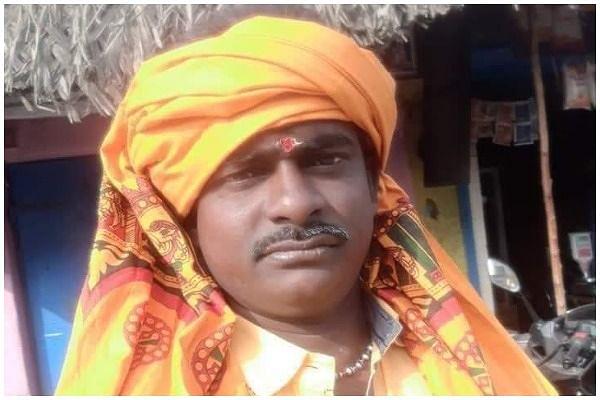 A local Bharatiya Janata Party (BJP) leader in Tamil Nadu's Trichy district was murdered on Monday morning (27 January) in what the party workers feel is a communal incident.

But Tamil Nadu police have termed the murder as “personal dispute” and BJP workers allege that efforts are being made to hush up the real reasons.

The BJP vice-president of the Palakkarai zone in Trichy district, F Vijay Raghu, was hacked to death by at least two persons (some put the number of assailants at four) near the busy Gandhi market early on Monday morning.

Police, including the Inspector-General A Amalraj, have come up with two reasons for the murder. One is the rivalry between Raghu and the suspected assailants in the lottery business.

The other reason given out by police is a love angle, which has dragged in a family member of the murdered person.

Tamil Nadu police efforts to hush up the case or at least the real reason for the murder of Raghu, belonging to the Scheduled Caste, were revealed in no time as they tried to mislead people over the name of one of the suspects.

Police said they suspected the hand of two persons — “Mithai” Babu and Vijay Sankar. The intention of the police was people would not find anything amiss with the name Babu.

However, “Mithai” is a nickname and Babu’s actual name is Mohammed Babu (Some call him Moideen Babu). “The very intention of police is questionable from the way they have tried to hide the actual name of the prime suspect,” say local BJP workers.

While BJP workers aren’t sure of the business angle, they allege that Babu had stalked Raghu’s 16-year-old daughter. This led to Raghu filing a complaint with the police resulting in Babu attacking him.

Since Babu attacked Raghu, police detained and imprisoned him under Goondas Act. He came out on 11 January after the mandatory one-year detention period under the Act got over.

“There was a personal dispute, no doubt. But that is not the reason for Raghu’s murder,” says a local BJP worker from Trichy.

There are reasons to lend an ear to what BJP workers in the region say. One of the main reasons why the BJP says that the murder is not on personal grounds but has communal overtones is the history of the Palakkarai region.

Palakkarai is a hideout for some of those linked to terrorist activities. For example, a Tamil Nadu BJP leader says, terrorists arrested by the National Investigation Agency in connection with the blasts during Easter in Colombo last year were from this region.

Second, in the murder of police sub-inspector Y Wilson, many evidences such as laptops and mobile phones were seized from Palakkarai.

Palakkarai being a Muslim-dominated region is witnessing opposition to the Citizenship Amendment Act (CAA), 2019. Being a BJP office-bearer in the region, Raghu was active in the campaign, including door-to-door, to garner support for CAA 2019.

In particular, there were two incidents in which Raghu was seen prominently.

The second incident was a rally taken out by the BJP in support of CAA in the region last week. Raghu was one of those who led the rally.

As the rally was taken out, a relative of Babu and a district Social Democratic Party of India (SDPI) leader threatened Raghu that he would pay the price for supporting CAA.

SDPI is the political arm of the islamist outfit Popular Front of India, which has been accused of having terror links and is at the forefront in anti-CAA protests across the country.

“The SDPI leader had allegedly told Raghu that Babu is out of prison and the latter would deal with him,” said the local BJP worker.

The murdered BJP leader’s brother had also told the police that Raghu had been threatened by a Palakkarai SDPI leader during the rally.

“The murder took place around 6 am with the assailants knowing well his routine. They had switched off the CCTV. This is pre-meditated murder and not due to any sudden rush of blood as the police want us to believe,” said the local BJP worker.

Another BJP Trichy region leader said that police called up all printing press owners in the districts and ordered them not to print any posters in connection with Raghu’s murder.

“Why should police resort to such a step which looks like they are out to appease only one section of the people?” the leader said.

The more serious charge against Tamil Nadu police is that the force, once seen at par with the Scotland Yard Police, is in a denial mode over the ground reality in the State.

Quite a few incidents have happened in the last three weeks which, perhaps, indicate that Tamil Nadu is fast becoming a haven for activists supporting terrorism and the Islamic State of Iraq and Syria (ISIS).

The incidents that have shocked the State since 8 January are:

These six incidents besides the murder of Raghu are interpreted as signs of a network of ISIS sympathisers being active in Tamil Nadu. “The suspicion of the network gaining strength is growing,” said the local BJP worker.

According to political analysts, the Tamil Nadu government is shying away from accepting the ground reality. “In the case of the attack on O P Ravindranath, no action seems to have been taken,” said an analyst.

BJP workers say police should investigate the murder thoroughly and not confine themselves to a narrow-angle of personal rivalry.