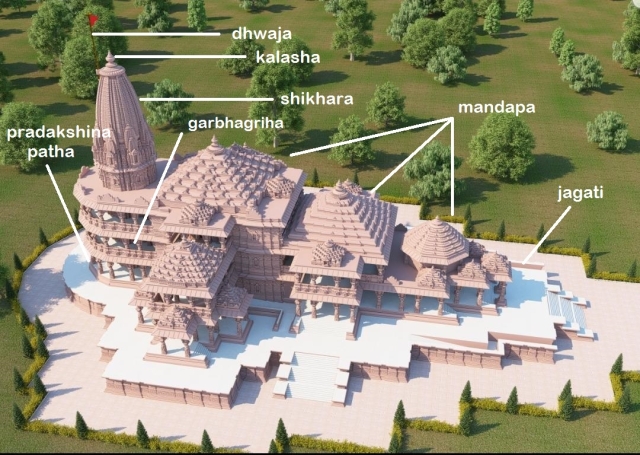 The grand temple at Rama Janmabhoomi in Ayodhya will follow the Nagara style of temple architecture, reports TOI.

Shri Ram Janmbhoomi Mandir will be a unique example of Indian architecture.

Here are some photos of the proposed model.

What is Nagara style of temple architecture?

The basic form of a Hindu temple contains the following architectural elements:

However, apart from the basic common elements with the spiritual significance, the Indian landscape is adorned with temples with a wide variety of architectural styles that developed under regional rulers.

The Nagara style of temple architecture is found in northern India. Nagara school is further subdivided into different schools based on region like Odisha, Khajuraho, Solanki etc.

In the Nagara style, the temple is generally constructed on a upraised platform called jagati. Mandapas are present in front of the Garbhagriha. These are adorned with the Shikhara, the tallest one being above the Garbhagriha.

Unlike the temples in south India, Nagara style doesn’t usually have elaborate boundary walls or gateways (South Indian temples often sport magnificent Gopurams). Generally, there is no water tank in the temple premises and the pradakshina patha is covered.

Reportedly, the stones from Banshi mountains in Rajasthan will be used for the construction.

The temple will be a whooping 161-feet high and have three storeys. The temple will be designed according to the Vastushastra ans Shilpishastra. All the calculations for different temple elements are highly specific.

There are different types of Shikhara found in Indian temples. A comparison with Khajuraho Vishwanath temple, also built in Nagara style, shows the similarity between the two.

Note that the main shikhara of the two are remarkably similar. They rise upward in a curved pyramidal fashion, ending in a horizontal fluted disc called an Amalaka topped with a Kalasha. This is called the latina-style shikhara.

South Indian temples, on the other hand, generally have stepped pyramid that rises up linearly rather than in a curve, known as Vimana. Also, this style doesn’t sport Vimanas over the mandapas, but only the main shrine. In Nagara style, however, mandapas are also adorned with shikhara.

The shikhara over the mandapas in the pictures of the Ayodhya Ram temple can be seen having a square base, and a rectilinear outline. This is called the phamsana-style shikhara. Note that the mandapa shikhara right at the entrance has an octagonal base.

This is what the main shikhara will look like from the inside:

The Ayodhya Ram temple will have five mandapas between the garbhagriha and the entrance- kudu mandapa, nritya mandapa, rang mandapa - in that order. The kirtan mandapa and prarthana mandapa will be on the either side.

The structure will have a total of 360 pillars.

The chief architect of the temple is Chandrakant bhai Sompura, who designed the Akshardham temple in Gujarat. His grandfather Prabhakarji Sompura had designed the Somnath temple.

Sompura says that the temple will take about three and a half years to complete. Over two lakh bricks with the ‘Sri Rama’ inscribed in different languages collected from all over the country thirty years ago will be used in the foundation.