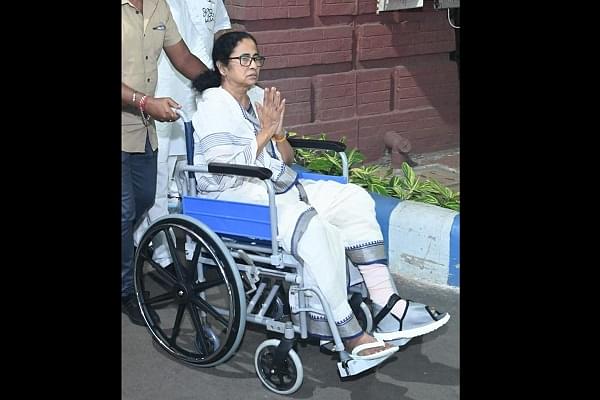 According to a report submitted by two poll observers to the Election Commission (EC) on Saturday (13 March), the Nandigram incident that caused injury to West Bengal Chief Minister (CM) Mamata Banerjee was an accident and not a planned attack, reports TOI.

The report was prepared by special observer Ajay Nayak and special police observer Vivek Dubey to West Bengal for the state assembly elections.

On 10 March, after the TMC supremo was returning after filing her nomination in Birulia Bazar, Nandigram, she was surrounded by the crowd and suddenly her car door slammed injuring her left leg.

Initially, Banerjee reportedly said that she was attacked by four-five unknown persons. However, in a subsequent video message from a hospital in Kolkata on Thursday, Ms Banerjee had said she was injured when a crowd surged around her car and pressed into her.

TMC in its memorandum to the EC alleged "a deep-rooted conspiracy to take the life" of its chief and linked it to the abrupt removal of the Bengal police chief a day before, blaming the Bhartiya Janata Party (BJP).

BJP, on the other hand, has been accusing Banerjee of feigning an attack to gain public sympathy in a losing battle ahead of state elections.

The poll observers’ report based on eye-witness accounts states that the security personnel’s inability to control the crowd surrounding the chief minister as well as the “suddenness” of the incident caused the injury, and that there was no conspiracy behind it.

"The incident was not a planned attack but an accident. It had taken place suddenly.. the local police and CM's security failed to control the crowd and that led to the untoward situation,” the report said.

State chief secretary Alapan Bandyopadhyay in a reply to the EC also said that the cause of the incident was not clear from the video grab collected from the place.

Bandyopadhyay in his report said, "The CM's vehicle was passing through a crowded area. It was then that there was a push on the door of her car. But, it is not clear whether the push was deliberate or not. The video grabs collected are not very clear.”

After the Nandigram incident, the administration has reportedly increased the security for the chief minister and the star campaigners.