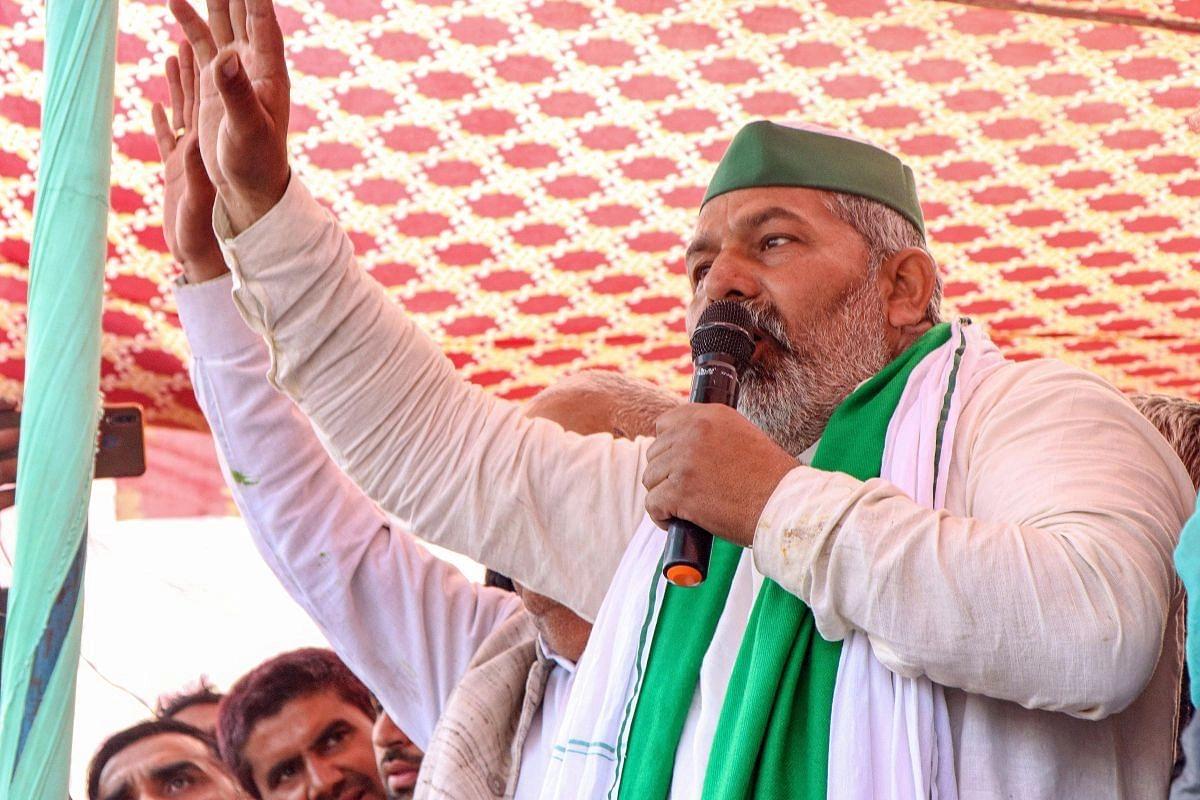 Following Prime Minister Narendra Modi’s announcement of the repeal of the three farm laws, the Samyukt Kisan Morcha (SKM), on Monday (22 November), organised a kisan mahapanchayat in Eco Garden, Lucknow. The public meeting was held to decide the further course of the farmer’s movement. Speaking at the mahapanchayat, Bharatiya Kisan Union (BKU) leader Rakesh Tikait said that farmers’ agitation won’t stop despite the repeal of the farm laws as many of their issues, including legal guarantee of minimum support price (MSP), are yet to be resolved.

“The agitation will not stop because many of our issues like the MSP guarantee law, seed bill, and milk policy are yet to be resolved. The government should hold talks with us, otherwise, we will not go home,” said Tikait. He further said that it did take an entire year to make the government understand that these laws will cause more harm.

Tikait’s Jibe At PM Modi And The BJP

Tikait, taking a hit at the central government, said that “it took us an entire year to make them understand. We said our things in our own language but those sitting in shining bungalows in Delhi had another language... They understood in one year that these laws are harmful and took the laws back. They did the right thing by withdrawing the laws but tried to divide farmers by saying that they failed to make some people understand the laws. We are some people.”

Tikait said that “PM Modi announced the withdrawal of the law in a sarcastic manner, as if someone runs away 'abusing' in the middle of the fight... He also apologised to the country, but his apology won’t get us our rate, formulation of a policy on MSP will.” Referring to PM Modi’s tenure as the chief minister of Gujarat, Tikait claimed that “when he was the CM of Gujarat, he was the chairman of a committee in which all the CMs were there. Then he gave a report to the then Prime Minister Manmohan Singh and advocated the implementation of MSP. That file is still lying in the PMO. We simply say, just implement the report of your own committee.” Tikait urged that Prime Minister Modi should give a “clear answer” before the country on the issue of guarantee of MSP.

“In their manifesto, they promised to implement the Swaminathan Committee Report. They won the election by lying to us, and then did not implement it. Earlier three quintals of wheat used to get one tola (10 gm) of gold, if you ensure so today, we will welcome the laws. The whole country is about to become a private mandi (agricultural market), you need to wake up. They tell you to sell your grain outside the market. This will weaken the market, and then they will say there is no income from these. They are busy selling the lands of the mandis, and will keep you entangled with Hindu-Muslim, Sikh-Hindu, and Jinnah," alleged the BKU president.

The Demands Of The Agitating Farmers

Tikait, warning the BJP government, said “we have numerous issues. They should talk to us about the guarantee of MSP, seed bill, milk policy, and about farmers who were martyred. If you do not listen to and agree with us, then agitation will be organised across the country... The arrest of Union Minister of State for Home Ajay Mishra is our main issue. If Teni inaugurates any mill, our sugarcane will not go to that mill. Rather, sugarcane will go to the District Magistrate's (DM) office, no matter how much loss it causes.”

Tikait said that when they withdraw the farm laws, they will also spread rumours. They will say that we have withdrawn the laws, yet the farmers are not agreeing to go back. But they will not tell you how many new laws are being imposed. In UP, sugarcane arrears worth over Rs 4,000 crore rupee are due. Yogi Adityanath, you must listen carefully, “the electricity rates are the highest, there is no purchase on MSP in the state”.

"The panchayat is being held against the incident that took place in Lakhimpur Kheri. The amount has not been paid for the sugarcane, it is related to that as well. More than Rs 4,000 crore is due now. The farmers growing potatoes are upset, the crops are procured as per the MSP. The central government has decided to roll back the three laws, the state government should write to the Centre regarding other issues. We want the correct price for the crops, withdrawal of the cases that were registered. The panchayat has been scheduled to discuss all of these," he added.

Earlier, the SKM had written an open letter to Modi raising their pending demands. It has put forth six demands before the government, including withdrawal of the proposed Electricity Amendment Bill (2020-2021), removal of penal provisions in the Commission for Air Quality Management in the National Capital Region and Adjoining Areas Act-2021, withdrawal of cases against farmers in Delhi, Haryana, Uttar Pradesh and other states, sacking of MoS (Home) Ajay Mishra whose son is an accused in the Lakhimpur Kheri killings, land at Singhu to raise a memorial to 700 farmers who died during the agitation and compensation for their families, reports Firstpost.

The Further Course Of Action

"The PM spoke in a honey-laden voice. If the PM of the country talks like this, it raises doubts. We want the PM of the country to be strong, not weak. You don't apologise, talk strictly, but resolve our problems,” said Tikait, while casting aspersions about the government’s real motive behind the repeal of the much contested three farm laws. He further said that a “sangharsh-vishram” (ceasefire) has been declared by the government and not farmers and that there are many issues before the farmers. “The struggle will continue. The government should talk to farmers about the issues related to them or else we are not going to go away,” announced Tikait.

“Our future program is fixed. On 26 November, marking one year of the movement, there will be a tractor march. On 29 November, 1,000 farmers will go to Parliament House by their tractors. This peaceful movement will continue. The Samyukta Kisan Morcha meeting is in Delhi on 27 November,” said Tikait on the further course of action of the agitating farmers.

Meanwhile, besides Monday's mahapanchayat, the farmers' unions are yet to hold Kisan Mazdoor Sangharsh Diwas on Sir Chhotu Ram’s birth anniversary on 24 November, the "Dilli Border Morche pe Chalo" on 26 November, a meeting on November 27 to decide the future course of action regarding the ongoing protest against farm laws and “Sansad Chalo” on November 29.

Shekhar Dixit, president of Rashtriya Kisan Manch, said, "the PM made the announcement about repealing of farm laws with an eye on the upcoming assembly elections in UP and other states, where the BJP is seeing power slipping away from its hands." Farmer leader Joginder Singh Ugraha said, "We don't trust the announcement made by the Prime Minister. We will believe that the farm laws are taken back only after we see a government gazette regarding it."

Despite the Prime Minister’s announcement of the repeal of the farm laws, the farmers’ unions have maintained their position that they won’t end their protest until the three contentious laws are repealed in Parliament, and the rest of their issues are resolved through talks and not unilateral decisions of the government.