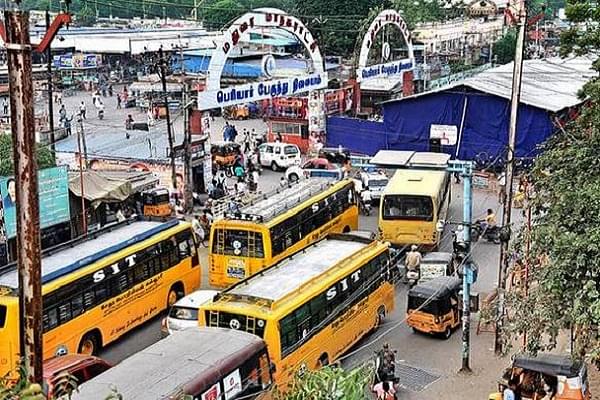 Dravida Kazhagam Chief K Veeramani has threatened to launch an agitation if the facade of Madurai's under renovation Periyar bus stand will have a Gopuram symbolising that it is a city of temples, Tamil News Channel Puthiya Thalaimurai reported.

Veermani claimed that the proposed design is an attempt by Hindutva forces to 'infiltrate' Tamil society.

Madurai, widely regarded as the cultural capital for the Tamil land for more than 2,500 years is a treasure trove of cultural and architectural history. Besides the iconic Meenakshi temple, the entire region of Madurai consists of numerous sacred sports (Thiruvilaiyadal) related to lord Shiva.

Another important festival that marks Madurai in the Indian continent is the Alagar festival which is aimed at uniting the two major and powerful sects in South India the Saivaism (Lord Shiva as main deity) and the Vaisnavism (Lord Vishnu as main deity).

The redevelopment of a swanky new Periyar bus stand is being executed under area-based development of the Smart Cities Mission. The city is also executing several other heritage projects to spruce up the infrastructure around the world famous Meenakshi Sundareswarar Temple.

Under the redevelopment project costing Rs 153 crore which is expected to complete by early 2021, the Periyar bus stand will have two levels for underground parking and four levels above ground for bus bays. The facade of the bus stand will be like a gopuram to denote Madurai as a city of temples.

While the new bus stand will have 67 bus bays, the two-level underground parking lots can accommodate 4,865 two-wheelers and 371 four-wheelers. The swanky bus bays would have solar panels, restrooms for bus crew, passengers and general public.

The redeveloped bus stand would have a carpet area of 88,719 square metres, including 37,423 square metres of commercial space. There would be space to park 4,183 two-wheelers and 259 four-wheelers.

The redevelopment project will provision for dedicated pedestrian walkways inside the integrated bus stand so that people need not weave their way through buses which will have unobstructed entry and exit.

A tourist plaza is being constructed for the benefit of people coming from near and far. The plaza will have shops where visitors will get a whiff of products available in the city. The plaza would also have WiFi, among other facilities. There will be 416 shops - 250 below ground and 171 above ground - largely selling items that showcase the heritage of the city.

Periyar bus stand, Shopping Complex bus stand (opposite Periyar bus stand) has already been demolished. Alternate arrangements have also been made to accommodate the buses around the old bus stand so that the regular commuters are not inconvenienced.