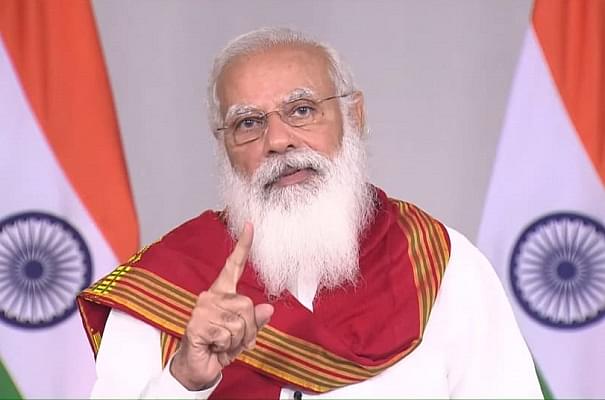 Prime Minister (PM) Narendra Modi on Wednesday (26 May) delivered a keynote address on the occasion of Vesak Global Celebrations on Buddha Purnima through video conference.

The event is being organized by the Culture Ministry in collaboration with the International Buddhist Confederation and will witness participation of all the supreme heads of the Buddhist Sanghas from around the world.

Over 50 most prominent Buddhist religious leaders from around the world will address the congregation.

Speaking on the occasion, the Prime Minister said Vesak is a day to celebrate the life of Lord Buddha and to reflect on the noble ideals and sacrifices he made for the betterment of our planet.

He added that he dedicated last year’s Vesak day programme to all the front-line workers leading humanity's fight against the Covid-19 pandemic and said that a year later, Covid-19 pandemic has still not left us and several nations, including India, have experienced a second wave.

He remarked that this once in a life-time pandemic has brought tragedy and suffering at the door-step of many and has impacted every nation. He said the economic impact left by the pandemic is huge and our planet will not be the same after Covid-19.

The Prime Minister said that the life of Gautama Buddha was about peace, harmony and co-existence but today, there are still forces whose existence depends on spreading hate, terror and mindless violence.

He said such forces do not believe in liberal democratic principles and thus gave a call for all those who believe in humanity to come together and defeat terror and radicalization.

“The Prime Minister thanked the first responders, front-line health care workers, doctors, nurses and volunteers for selflessly risking their lives to serve others in need everyday. He expressed condolences to those who have suffered and lost their near and dear ones,” the Prime Minister's Office said in a statement.