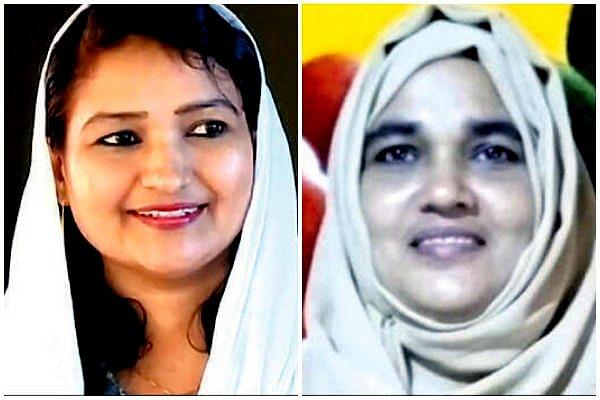 Over 1.68 lakh people will be contesting the local body elections in Kerala during three phases next month — 8, 10 and 14 December — that is being watched with bated breath in view of the stakes among all contestants.

But two women candidates contesting the panchayat polls on Bharatiya Janata Party (BJP) tickets in Malappuram district are the focus of all attention. The two are T P Sulfath and Aysha Hussain, according to Malayalam daily Kerala Kaumudi.

Sulfath is contesting from the sixth ward of Vandoor village panchayat, while Aysha from the ninth ward of Ponmundam panchayat. Both of them have begun the election campaign.

Sulfath contesting the polls on a BJP ticket is significant since her husband, a non-resident Indian, and relatives are supporters of the Indian Union Muslim League, which rules the roost in Kerala’s Malappuram district.

Sulfath, a mother of two, hails from a business family and should consider herself lucky that her family has not opposed her decision to contest on behalf of the BJP.

The BJP’s candidate from Vandoor village is contesting an election for the first time and actually, the party wanted her to contest for district panchayat elections.

But she chose to focus on her village.

Sulfath is a great fan of Prime Minister Narendra Modi, particularly since his government chose to ban triple talaq, a menace for Muslim women in the country, and the intent to raise the age of marriage.

No one can know the problem of an early marriage better than her, as she was married at the tender age of 15. She says she has been an avid follower of Modi ever since he came to power.

Aysha, in contrast to Sulfath, should consider herself lucky since her husband, Hussain, is a member of the district committee of the BJP’s minority wing.

The BJP’s Ponmundam village candidate, who is also making her debut in the elections, says she has been impressed with Modi’s initiatives to strengthen the country’s external security.

A drop out from school after completing seventh standard, the 42-year-old has a girl who is now doing her tenth standard.

The BJP hopes to do well in the local bodies polls, given the impressive gains it made in 2015. Then, it bagged a couple of panchayats and finished second in Thiruvananthapuram corporation.

However, it has failed to gain much headway in Kerala, with veteran leader and former Union minister O Rajagopal winning the lone seat for the party in the 2016 elections being the sole consolation.