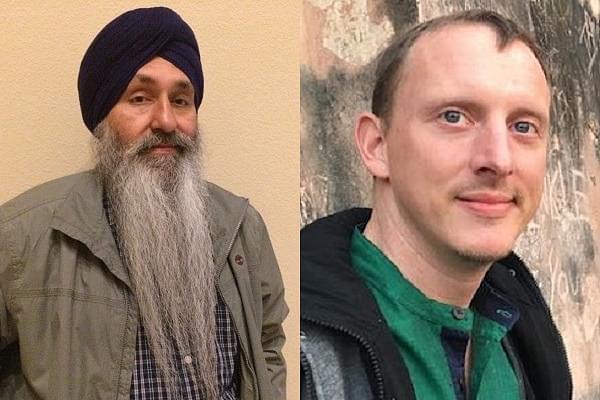 Bhajan Singh Bhinder alias Iqbal Chaudhary - an ISI operative- and Christian missionary Pieter Friedrich, who has been on the radar of Indian security agencies since 2006

Explosive details continue to emerge into the Farmer Protest Toolkit, amid the ongoing Delhi Police investigation.

The Delhi Police has arrested 'climate activist' Disha Ravi and is looking to nab absconding lawyer and purported AAP leader Nikita Jacob and another individual named Shantanu over their role in creating the toolkit and interactions with a pro-Khalistani organisation.

The Delhi Police in a press-conference has now revealed fresh names in the toolkit controversy including that of Christian missionary Pieter Friedrich, who the cops say has been on the radar of Indian security agencies since 2006.

In 2006 Friedrich was found to be keeping the company of Bhajan Singh Bhinder alias Iqbal Chaudhary - an ISI operative part of the K2 desk of the Pakistani intelligence agency.

The Delhi Police adds that Bhinder was also a person of interest for the US Drug Enforcement Agency (DEA) and is currently instrumental in running psyops against India. Besides being an ISI operative Bhinder is also believed to have been involved in drugs and arms smuggling.

Friedrich was one of the individuals who was part of a "persons to be followed" list created within the protest toolkit and cops say that the accused like Disha Ravi in the matter would be better placed to give the reason for the same.

The Delhi Police said that it remains to be seen whether their connection with Friedrich came through pro-Khalistani organisation Poetic Justice Foundation’s Mo Dhaliwal or whether the accused like Disha had a direct link to him.

The Significance And Meaning Of Delhi Police's Revelations

In a viral twitter thread, DisInfo Lab attempts to shed light on a proxy/psy-ops war which will explain the reason for the inclusion of Friedrich's name.

The #toolkit dropped by @GretaThunberg had many key players but the name of the foreign expert Pieter Friedrich was dramatic as he was the part of a true story we were working(About group which tried every possible way to unsettle India)#UnendingWar(1/17)https://t.co/4KixWXZkS1

DisInfo Lab writes that Bhinder, since 1980s, has been funding terror networks and also attempted to launch a large-scale attack terror against India with the help of ISI and another terrorist named Lal Singh which was foiled by Indian agencies.

This attempted terror attack, DisInfo Lab claims, was part of ISI's K2 (Kashmir-Khalistan) cell which was launched under the patronage of Jamaat-e-Islam secretary Amir ul Azeem and other stakeholders.

This network was allegedly funded by California based Bhinder's drug trafficking network. Bhinder also reportedly attempted to transport heavy duty weapons to India but was unsuccessful.

DisInfo Lab goes on to say that these failures resulted in Bhinder changing his strategy to start an info-war against India.

He managed to find an young and struggling Christian Missionary Pieter Freidrich to prop him up as an "expert-activist". The thread adds that a series of books were published and organisations were founded in Freidrich's name to provide him credibility.

Articles were also published in Freidrich's name and his avatar became active on social media and was subsequently amplified.

Some of the campaigns by Bhinder and Freidrich allegedly included spreading anti-Gandhi rhetoric to malign India's non-violent image and to project India as a "fascist state".

DisInfo Labs adds that over the years Freidrich has managed to amass a large social media following amid major influencers but is mostly dependent on Pakistan for his project's success.