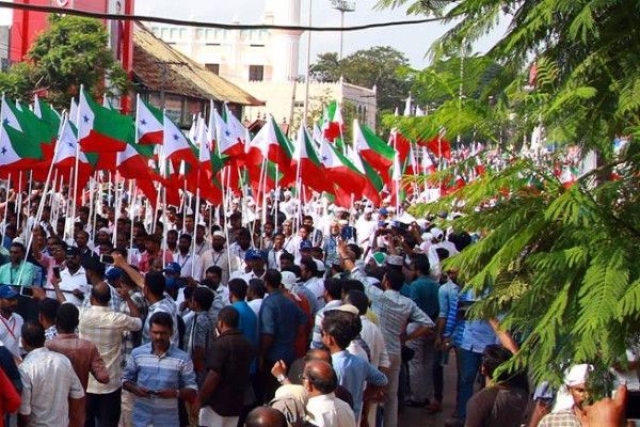 Radical Islamist outfit Popular Front of India (PFI) has been allowed to provide services of its volunteers and vehicles to dispose of bodies of novel coronavirus (Covid-19) victims in Puducherry’s Oulgaret municipality and conduct their last rites.

The PFI might have got permission to provide the funeral services in Oulgaret municipality to start with but could also get permission to extend the services to other areas in the Union Territory. The radical organisation’s services will be to either bury or cremate the bodies.

The Hindu Munnani has objected to a radical organisation such as the PFI being given the permission and has written to the Union Territory Chief Secretary to review the decision of the Congress government headed by V Narayanasamy.

Hindu Munnani sources alleged that PFI leaders in the Union Territory had got hold of someone in the government and obtained the permission.

A curious feature of the permission that PFI has got to provide its services is that it was sanctioned within 24 hours of its Puducherry president A Ahmed Ali writing to the municipality commissioner M Kandasamy.

Hindu Munnani sources alleged that the PFI, which has actively organised protests against the Citizenship Amendment Act, 2019, during December last year and January-February this year, was trying to hide its real face in the garb of rendering such services of cremating/burying Covid-19 victims.

Wondering why the Congress government in Puducherry gave permission to the PFI, the sources pointed out how the National Investigation Agency has found the organisation to been involved in various terrorist activities across the country.

The PFI came in limelight for its brutal act of violence when its members chopped off a hand of T J Joseph, a lecturer from Ernakulam district of Kerala, on 4 July 2010.

The organisation is believed to have a strong presence in as many as 15 states and reportedly has links with the banned Students Islamic Movement of India (SIMI).

PFI has been accused of floating several front organisations like the Citizen’s Forum in Goa, Nagarik Adhikar Suraksha Samiti in West Bengal, Community Social and Educational Society of Rajasthan, Karnataka Forum of Dignity (KFD) in Karnataka, Liong Social Forum in Manipur and the Association of Social Justice in Andhra Pradesh.

In 2010, the then Chief Minister of Kerala and senior CPM leader, V S Achuthanandan, accused PFI and its allies of plotting to Islamise the state of Kerala within 20 years. He alleged that the PFI was splurging money to attract youth from other religions and encouraging them to marry Muslims.

PFI‘s strategy is aggressive propagation of Islam among the non-Muslims, but it projects itself as a group working for the upliftment of the less privileged in the society.

The PFI has been active on the political front through its wing the Social Democratic Party of India.

As such, Puducherry is not facing any big problem due to the spread of coronavirus like neighbouring Tamil Nadu.

However, the Union Territory drew flak for its sanitary workers throwing a coronavirus victim’s body into a pit without giving the departed person the due respects. Three workers were suspended for the misdeed.

So far, 194 persons have tested positive for coronavirus in the Union Territory with five deaths being reported. In contrast, neighbouring Tamil Nadu has reported 44,661 Covid-19 cases and 435 deaths.